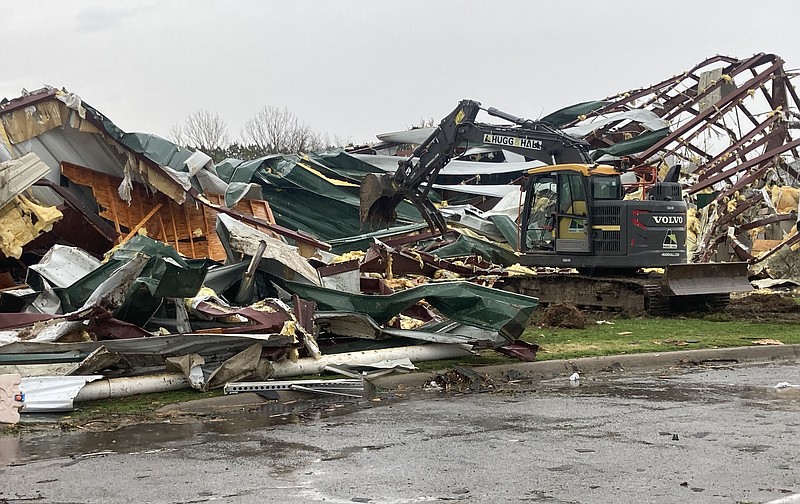 A trackho sifts through debris Wednesday, March 30, 2022 at George Elementary School in Springdale after a tornado swept through the city. (NWA Democrat-Gazette/FLIP PUTTHOFF)

SPRINGDALE — A tornado touched down in Springdale early Wednesday morning injuring seven people, two critically, according to a police spokesman. All were taken to local hospitals.

The storm damaged houses and businesses as well in Johnson and Springdale, officials said. Springdale Mayor Doug Sprouse declared an emergency, which should trigger similar declarations at the county and state levels, according to a statement from the mayor.

The Washington Regional Medical Center Emergency Department confirmed the Fayetteville hospital received three patients following the severe weather. Storm victims suffered injuries ranging from minor to serious, according to a statement from the hospital. One of the patients was treated and discharged by midday, according to the release.

Northwest Medical Center-Springdale received the other four victims, according to spokeswoman Abby Davenport. “As of 11 a.m. four storm victims have been brought to our emergency room, with one remaining in good condition, one transferred to another facility and two treated for minor injuries and released.”

“We are pretty certain that is was a tornado,” meteorologist Joe Sellers, with the National Weather Service in Tulsa, Okla., said about 8:45 a.m. Wednesday.

The tornado appeared to touch down around 4 a.m., on Main Drive in Johnson, traveling through the Lokomotion Family Fun Park on College Avenue in north Fayetteville, said Capt. Jeff Taylor with the Springdale Police Department. Its path was through Black Oak Avenue, Don Tyson Parkway, and Turner and Powell Streets, where George Elementary School was struck.

Sellers said Weather Service staff had seen photos on social media of damage in Springdale, including to George Elementary at 2838 S. Powell Street. He said a tornado warning for the area was issued at 4:11 a.m.

The gymnasium at the school was destroyed and the kitchen and cafeteria were severely damaged, according to a news release from the district. Maintenance staff are assessing damage in all buildings throughout the School District, according to the release.

The tornado also damaged residences at a mobile home park on Black Oak Avenue in Springdale.

Firefighters from Springdale and Fayetteville, Washington County Emergency Services and other first-responders spent the morning checking houses door-to-door in the damages area. No one was reported missing, Taylor said.

Old Missouri Road was closed because of a damaged traffic light, he said.

Part of Main Drive in Johnson also was closed by tornado damage. An auto shop building on Main Drive was blown off its foundation during the storm, knocking down power lines and keeping the street closed through midmorning.

“We just got the building out of the street,” Chief Chance Wright with the Johnson Fire Department said around 10 a.m. “The power lines are still down and Main Drive is closed from U.S. 71 to Elmore Street. They’re stretching the power lines right now. About half of Main Drive is without power.”

Wright said the shop building wasn’t in use and other buildings and homes had mostly minor damage. He also said a radio tower in Johnson was blown down and destroyed during the storm. Wright said there were no injuries reported from the storm.

A post on the National Weather Service’s Twitter page a little before 8:30 a.m. stated: “We’ve received multiple reports of damage in the Springdale area. We will be surveying the damage today to determine the official cause, any necessary ratings, etc., and we’ll update as soon as we have that information.”

Robert McGowen, Benton County administrator of public safety, said no storm damage had been reported in his county.

Where to find assistance:

• Businesses in Springdale damaged by the storm are asked to call the Springdale Chamber of Commerce at (479) 872-2222.

• The Jones Center is providing shelter, water, coffee and doughnuts to residents in need

• Cross Church’s Compassion Center and Feed the 479, 3157 W. Sunset Ave., is open for residents with food or clothing needs

• First United Methodist Church, 206 W. Johnson Ave., and its Bread of Life mission is providing assistance to impacted residents. Call (479) 751-4610 or email [email protected] for more information. The church will be hosting a Community Supper tonight at its main campus for impacted residents from 5:30 p.m. to 6:30 p.m.

The Springdale School District is closed today due to power outages and the potential for severe weather, according to a press release from the district.

A social media post from the Springdale Fire Department reports that there are several power lines and trees down. Several traffic lights may be down as well.

The department is asking citizens to avoid the following areas:

An online map provided by SWEPCO shows that thousands of customers are without power in Washington County.