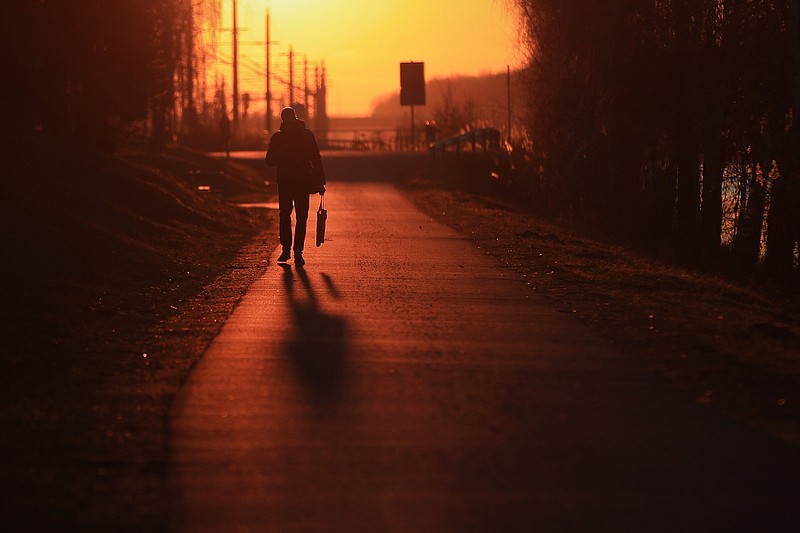 The sun sets in Wolfsburg, Germany, on March 9, 2022. MUST CREDIT: Bloomberg photo by Krisztian Bocsi.

Two weeks since Russia began Europe's biggest conflict since World War II, businesses across the continent are already in varying stages of despair at the consequences on livelihoods.

A crisis of human suffering in Ukraine, whose wider economic impact prompted European Central Bank officials to quicken their withdrawal from stimulus this week, is affecting prosperity from the farmlands of Spain to the eurozone's manufacturing core in Germany and France.

Surging energy costs are the central complaint, though disrupted supply chains, sanctions and worries about a looming demand drop are also weighing on enterprises. The abrupt shock of war nearby, combined with broad effects and an uncertain duration, will pile pressure on governments to cushion the blow as well as testing their resolve to confront Russia.

The root of the difficulty is the European Union's reliance on Ukraine for over half its supply of corn, a key source of feed for pigs. With farmers unable to access fields, analysts are slashing outlooks for crops and exports there by as much as a third, sending prices to the highest in about a decade.

Other economic disruption is being inflicted by the geography of the crisis.

In Germany, the heartland of the eurozone economy, Porsche stopped production of its Taycan electric car in Stuttgart because it lacks cable trees made in Ukraine. Meanwhile its parent, Volkswagen, has halted exports to Russia and stopped production at an auto factory in Kaluga outside Moscow.

Most onerous is the energy impact. If current prices persist, the extra cost of importing gas and oil will amount to an income shock of $605 billion or 4.5% of annual gross domestic product, according to JPMorgan economist Greg Fuzesi.

Goldman Sachs projects inflation will reach toward 8% and the eurozone will suffer a contraction in the second quarter.

To many eurozone businesses, that pinch has been immediately crippling. Just in December, Manuel Rodriguez's Groupe Kramer took over a century-old porcelain factory in eastern France called Jurassienne de Ceramique Francaise. He has now made the decision to put it in hibernation.

"If we were to pay a gas bill that's increased 10-fold, we'd hit the wall," he said. "We would have no other choice but to file for bankruptcy and close down the factory."

Heading south, along Italy's coastline, the spiraling cost of fuel has also left many trawlers unable to go to sea and sparked a week-long strike of fishing boats. Carlo Lista, who owns a fishmonger business in Rome's Monteverde district, says the effect has been dramatic.

"About 80% of fishing boats have stopped due to the surge in fuel prices," he said. "You go there, and it's maybe one boat, and one guy bids and then another. And the price just goes up -- whoever bids more gets the fish. Prices are just soaring and soaring."

Fishermen are calling on Italy's government to do something about their predicament beyond the 16 billion euros already spent to protect consumers and companies from rising energy costs.

That's a plea being echoed around the continent.

In Spain, Prime Minister Pedro Sanchez has already extended a series of energy tax breaks to the end of June. Portugal will cut fuel levies starting on Friday, and other counterparts are likely to take similar action.

With the EU also under pressure to act, leaders are discussing the energy crisis in Versailles on Friday. One measure the bloc could consider would be to temporarily lift a ban on imports of genetically modified grains from the U.S. and South America to help farmers struggling with supply disruptions, according to Spain's Agriculture Minister Luis Planas.

"If the gas supply is turned off, Germany and Eastern Europe almost certainly face a crunching blow to output, pushing the euro area into recession," Maeva Cousin and Jamie Rush of Bloomberg Economics wrote in a report.

The political impact of the cost-of-living squeeze is ultimately likely to test the continent's resolve to keep confronting Russia at a time when its president, Vladimir Putin, is threatening to shut off gas supplies amounting to about a third of EU consumption.

"This is a sword of Damocles," said Yves Dubief, whose grandfather founded textile weaver Tenthorey, an employer of 50 people in northeastern France that produces 5 million meters of cloth a year.

In such circumstances, the business leader says the state would need to revive measures used during covid-19 to need help with fixed costs and furloughing workers.

"If there is an embargo and we have to reduce our production, whatever the price of gas, it will be a question of whether we are compensated by public authorities," Dubief said.

While such challenges are likely to focus governments in coming weeks, the most immediate task of addressing economic fallout has been left to European Central Bank President Christine Lagarde.

Officials accelerated stimulus withdrawal on Thursday as they unveiled forecasts showing inflation averaging 5.1% this year. The war presents a "substantial upside risk" to prices, she said.

Rodriguez, the French ceramics entrepreneur, looks on that threat with dread. He warns that the problems he's seeing are likely to cascade throughout global manufacturing.

"There is a domino effect," he said. "All big industrial firms on the planet have the same problem. In the more or less long term, we will all be faced with this problem of gas that's too expensive."

Information for this article was contributed by Christoph Rauwald, Giovanni Salzano and Irina Anghel of Bloomberg News.