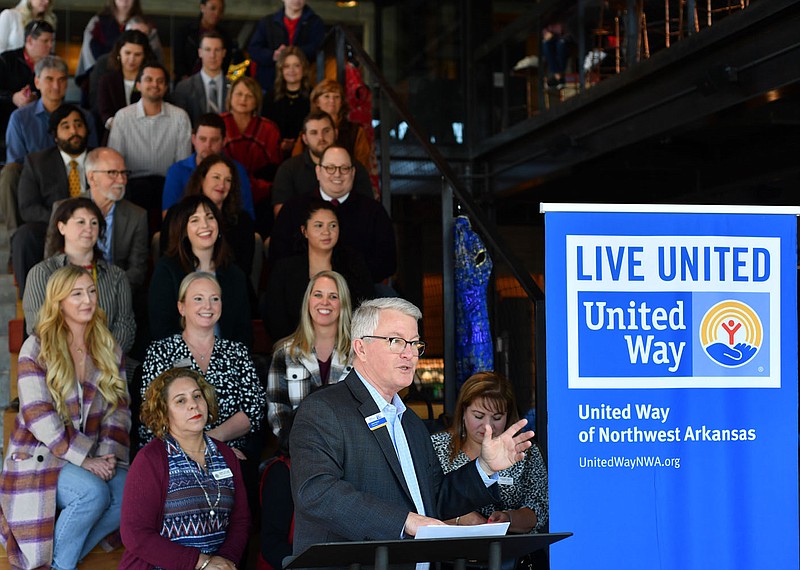 Jackie Hancock, president and CEO of United Way of Northwest Arkansas, speaks Wednesday, March 9, 2022, in front of a group of representatives of participating area nonprofits during an announcement of the recipients of the organization?s Community Investment Grants at TheatreSquared in Fayetteville. The United Way will provide $1.9 million to 30 area nonprofits in support of asset-limited, income-constrained and employed families in Northwest Arkansas. Visit nwaonline.com/220310Daily/ for today's photo gallery. (NWA Democrat-Gazette/Andy Shupe)

FAYETTEVILLE -- The United Way of Northwest Arkansas has announced $1.9 million in grants to help serve families in need.

The regional organization has put its focus on families determined to be limited in assets and constrained by income, yet still employed, Jackie Hancock, president and chief operating officer of the region's United Way, said Wednesday. These families earn above the federal poverty level, but not enough to keep from struggling financially.

Hancock spoke Wednesday afternoon during a news conference at TheatreSquared in Fayetteville to announce the grants.

Grimsley Junior High School in Bentonville will receive $40,000 over the next two years to build its after-school program, reported Joe Herrington, an eighth-grade English teacher and chairman of the school's English department.

The program, started just this year, serves students who need support in literacy skills -- but those needs are not so intense that the students qualify for help during the school day, Herrington explained.

Lessons on various comprehension skills find students working together on activities, taking advantage of teenagers' social instincts, he said. One of the early activities was learning how to access the Bentonville Public Library via their school Chromebooks to ensure access to texts needed during times of virtual learning.

The money from the United Way might help give the students end-of-year goals for the program, he said. For example, students requested a trip to a trampoline or rock-climbing facility in their community.

Teachers would preview the activity with related reading, such as an article on gymnastics from last summer's Olympics or the memoirs of a world-renowned rock climber, Herrington said.

Hancock said the local United Way experienced a drop in donations during the covid-19 pandemic. Millions of dollars are donated each year when employees make donations as part of workplace campaigns.

In fact, donations through the workplace campaigns were also slowing down, and the staff was working to renew the programs, Hancock said.

"But we did not lose momentum," he said. "I thought we were tanked. But we didn't lose as much as we feared. The amount we lost wasn't measurable."

The staff went home to work during the pandemic, but they didn't slow down, Hancock said.

He touted the revival of United Way's 211 program, which was cut locally for lack of funding three years ago, he said.

The Northwest Arkansas United Way reopened the service statewide on the day Gov. Asa Hutchinson shut the state offices in the face of the covid-19 pandemic, Hancock said. The service received about 3,000 calls last month, he reported.

A toll-free call or text to the phone number 211 will be answered by a resource specialist who will put the caller in touch with local organizations that provide critical services such as food, clothing, housing and medical care.

And the Northwest Arkansas United Way continues to offer a couple of programs started during the omicron surge of the pandemic, Hancock said.

The University of Arkansas for Medical Sciences in Fayetteville -- through DoorDash food delivery company -- will deliver at-home covid tests to homes requesting them from the medical school, he noted.

A similar program was started for patients with Type 2 diabetes, Hancock said. Medical school health screeners had dietitians create menus for diabetes-friendly meals for patients. Harps Food Stores staff gathers the ingredients, and DoorDash drivers deliver them to the homes of patients.

The United Way also helped residents get to and from doctor appointments and other medical care facilities with the help of Lyft, a ride-share service, Herrington said. 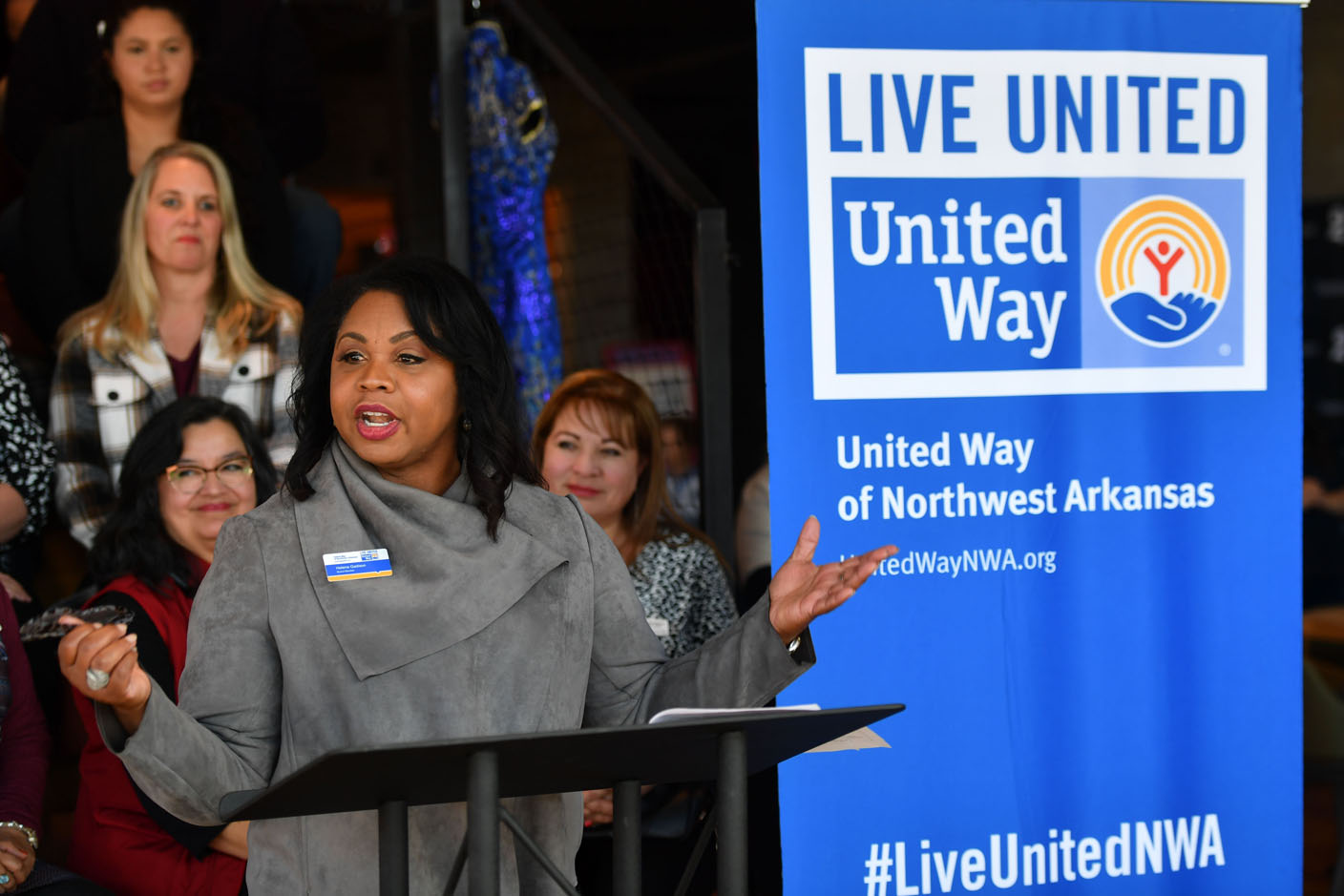 Helena Gadison, chairwoman of the board of United Way of Northwest Arkansas, speaks Wednesday, March 9, 2022, in front of a group of representatives of participating area nonprofits during an announcement of the recipients of the organization?s Community Investment Grants at TheatreSquared in Fayetteville. The United Way will provide $1.9 million to 30 area nonprofits in support of asset-limited, income-constrained and employed families in Northwest Arkansas. Visit nwaonline.com/220310Daily/ for today's photo gallery. (NWA Democrat-Gazette/Andy Shupe)
Award recipients

The United Way of Northwest Arkansas on Wednesday awarded $1.9 million in grants to area agencies which help boost families who earn above the federal poverty level, but not enough to keep from struggling financially. The awards were given for programs in the areas of early learning, quality out-of-school time and developing self-sufficiency. Award recipients include:

Girls on the Run of Northwest Arkansas