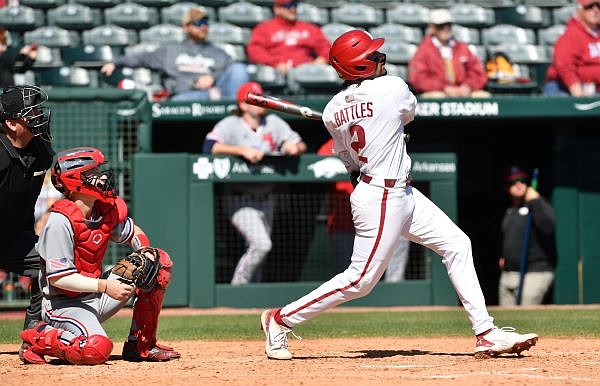 Tygart gets a called third strike to end the game. Arkansas sweeps the doubleheader.

The potential final out is hit by the pitch and the Flames have the tying run on first.

Turner throws out the base runner at second base and the Razorbacks are an out away from an improbable come-from-behind victory.

The freshman righty walks the leadoff man but recovers with a strikeout.

Tygart makes his way back to the mound to finish the game.

Michael Turner hits a bloop single over the second baseman and the home team takes its first lead of the game.

Cayden Wallace secures the Hogs' third straight hit. There are two runners on with just one out for the heart of the Arkansas lineup.

Stovall singles past the shallow-playing infield to tie the game.

Battles scores on a wild pitch. Gregory advances to third.

Gregory doubles down the line in right field. Lanzilli scores. Battles is held up at third with one out.

Battles reaches on a fielder's choice.

Jalen Battles comes to the plate as the tying run after a hit batter and a walk from Kendall Diggs to start the inning.

Tygart gets out of the inning unscathed. His fastball topped out at 96-mph.

Griffin walked two batters but picked both of them off. He hit his last batter before being replaced by RHP Brady Tygart.

LHP Nick Griffin is in to throw for Arkansas.

The Razorbacks are 1-16 with runners on base in Game 2. They've stranded nine runners.

Turner grounds into a double play.

Moore is hit by the initial pitch of the frame.

A lineout double play ends the inning. Ramage has now thrown 35 pitches in 3 1/3 innings of relief.

Ramage hits the leadoff batter on an 0-1 count. He steals second and scores on a single up the middle.

The Razorbacks are on the board.

Once again, the Hogs leave multiple runners on base. They have just one hit and are 0-6 with runners in scoring position so far.

Arkansas has runners on the corners with one out. The Flames are going to the bullpen after their starter allows an eighth free pass of the afternoon.

Ramage sits the visitors down in order. He capped the inning off with a swinging strikeout on a pitch in the dirt.

Stovall taps one back to the mound and the Flames get outs at home and first to escape the jam. Stovall may have beaten the throw to first if he has not slowed at the last second.

Arkansas has the bases loaded with one out after a leadoff double by Lanzilli followed by consecutive walks of Battles and Gregory.

Tole manages to get two outs sandwiched between a pair of doubles. RHP Kole Ramage is on to replace Tole after the second extra-base hit.

RHP Heston Tole comes relieves Ledbetter. His day is finished after giving up 1 run on 3 hits through 3 innings. He threw 44 pitches.

Nothing doing for the Razorbacks.

They put another runner on base thanks to a walk from Turner but are still hitless.

Ledbetter surrenders a second hit but Leach throws out the runner attempting to steal second to get out of the inning.

Hogs strand two more in the second as Dylan Leach looks at a called third strike.

Ledbetter racked up a pair of strikeouts in a 1-2-3 inning. He's thrown 34 pitches.

The Razorbacks strand a runner in the opening frame after a walk from Robert Moore.

A leadoff walk from Ledbetter comes around to hurt the Razorbacks. The runner stole second and then scored on a fielder's choice with one out.

The Razorbacks defeated the Flames 12-4 in Game 1.

Freshman RHP Austin Ledbetter will take the mound for his first in his Razorback career. He struck out 5 batters in 2.2 scoreless innings in his lone relief outing this season.