Rogers superintendent search is down to three candidates 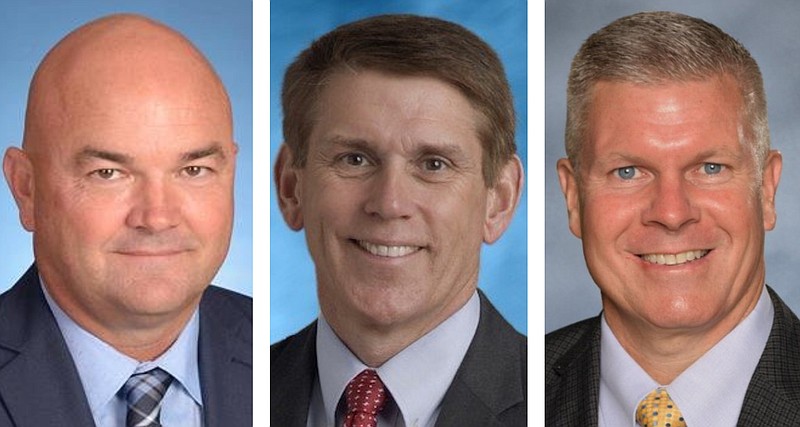 ROGERS -- One internal candidate and two superintendents from neighboring states are among the finalists to be the School District's next superintendent.

"We had an excellent field of candidates, and we are looking forward to meeting with the finalists," said Nathan Gairhan, board president. "The community expects the best, and we plan to find that candidate."

The board plans to interview the finalists in executive session during a special meeting at 5 p.m. Monday. Any board action will be voted on in open session, the release states.

Gairhan previously said he hopes the board will pick the next superintendent by its next regular monthly meeting on March 15.

Superintendent Marlin Berry, 66, announced in October his intention to retire this summer. He has been the district's superintendent since 2016.

Davis also served as a teacher, football coach, assistant principal and athletic director during his time in Peoria. He's spent more than 28 years in education.

Perry has been an educator for 35 years, including the last 18 as a district superintendent. His current district, Hamblen County, has more than 10,000 students, according to the release.

Perry began his career as a high school teacher and coach in Norton, Va. He later served as an assistant principal at both the high school and middle school level and then as a principal of a large elementary school in Riner, Va. He has served as a division superintendent of schools in Byers and Kremmling, Colo.; Wise, Va.; and Wythe County, Va., the release states.

Schmitz has been superintendent in Lebanon, a district of about 4,300 students, since 2016. Much of his 30-year career in education has been in southwest Missouri. Before his tenure in Lebanon, Schmitz was director of secondary learning and operations in the Springfield (Mo.) Public Schools for three years, according to the release.

He began his career in education as a teacher and coach in Nevada, Mo. He then moved to Fulton, Mo., to be an assistant principal at a middle school. He held multiple school and central office leadership roles during his time in Springfield. His service in public education was in tandem with a 22-year career as an officer in the U.S. Army Reserves, from which he retired in 2010, the release states.

Perry and Schmitz both have doctorate degrees. Davis does not.

Forty-three people applied for the Rogers superintendent job by the Feb. 6 deadline, Gairhan said. Ray and Associates, the firm hired by the board to conduct the search, whittled the candidate list to 14 and presented those candidates' qualifications to the board last week. The board interviewed candidates virtually this week to get to the three finalists.

The applicants included at least 12 current school district superintendents from Arkansas and elsewhere, according to information provided by Ray and Associates.