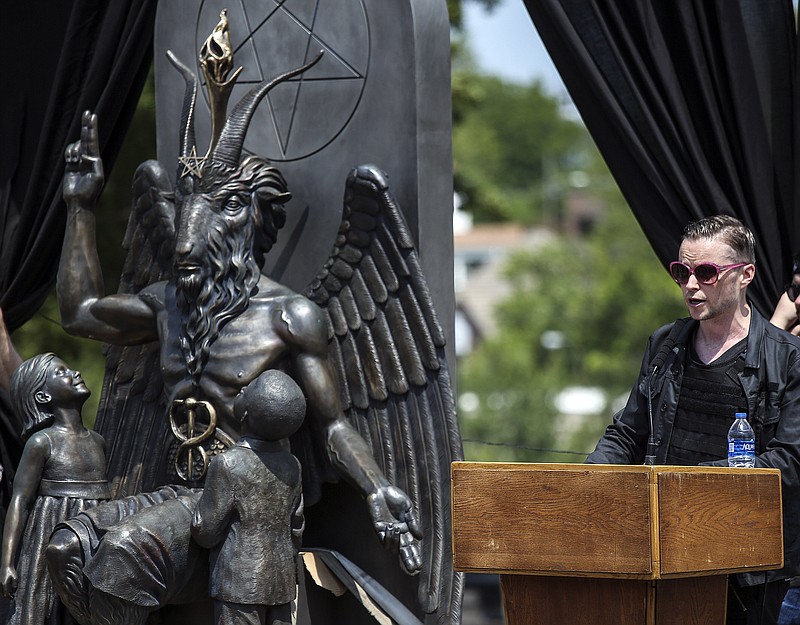 FILE — Lucien Greaves, a spokesman for the New York-based Satanic Temple, speaks next to a statue of Baphomet, during the Rally for the First Amendment at the State Capitol in Little Rock Thursday, August 16, 2018. (Arkansas Democrat-Gazette/MITCHELL PE MASILUN)

The Satanic Temple, a Massachusetts-based religious group, filed suit Friday against the Lamar Media outdoor advertising company for not posting the temple's pro-abortion rights billboards. The temple claims religious discrimination in the case.

The temple was in the final stages of a deal for billboard space in Northwest Arkansas, central Arkansas and Indiana, the suit says. It was to include one site in Springdale. "On September 15, 2020, the parties entered into a valid, enforceable contract on a form prepared by Lamar, wherein Lamar would place several billboard designs advertising TST's abortion ritual at the subject locations for the period beginning September 28, 2020 and ending October 25, 2020 and, in return, TST would pay Lamar $16,387," the suit says.

The temple's lawsuit cites Arkansas law allowing challenges to "laws when they substantially interfere with the plaintiff's religious beliefs and practices, irrespective of whether the legislative motivation behind the law is religious discrimination." "Bodily autonomy" including the right to an abortion is a core religious belief of the temple, the lawsuit says.

"TST holds the view that some abortion restrictions substantially interfere with its religious beliefs," the lawsuit says. The temple claims a religious exemption for its members in regard to laws restricting abortion.

"On August 5, 2020, TST unveiled the Satanic Abortion Ritual, which includes the abortive procedure into the above described sacramental act that confirms bodily autonomy and the adherence to scientific supremacy, wards off the effects of unjust persecution, and reasserts as ideals the dual paths of reason and confidence," the suit says. Therefore, an abortion performed along with the ritual is not a just a medical procedure but a religious observance, the suit claims.

"Part of this case will involve proving that TST's Satanic Abortion Ritual is substantively different than getting a secular abortion, even though it involves the abortive act, such that this advertising contract contemplated a religious message," the lawsuit says.

Lamar's office in Little Rock began expressing reluctance to carry out the contract before seeing the proposed design for the billboards, the suit says. Therefore, the rejection that soon followed springs from a double-standard on the abortion issue and not from some valid concern about the billboard design, according to the lawsuit.

The suit cites cases in which Lamar had accepted temple advertising on billboard's before. The suit also cites anti-abortion billboards the company allows that, the lawsuit claims, are far more strident and likely to give offense than the designs the temple submitted. Attempts to find a competing billboard company with suitable sites failed, the suit says.

Lamar acknowledged a request for comment in an email but had not responded by deadline Monday.