Moving On Up: Festival incorporates yoga, dance, art and more 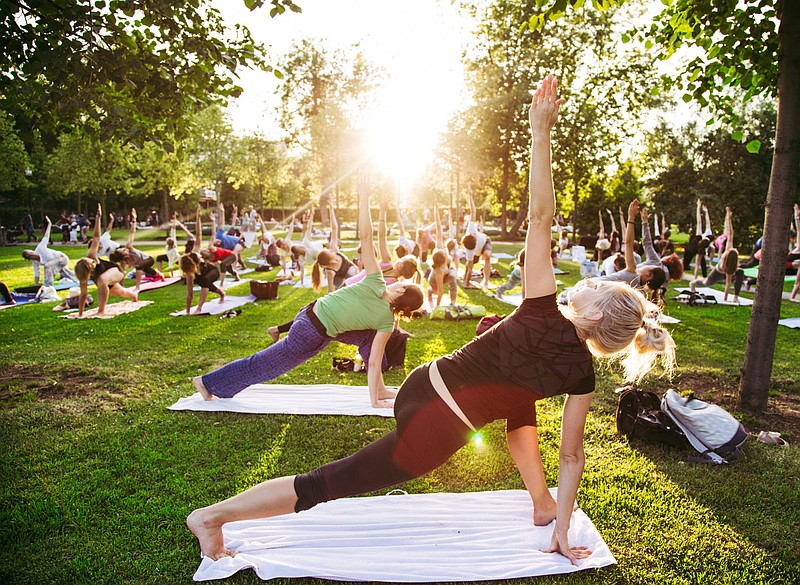 Yoga, says Kyndal Saverse, founder of the Fayetteville Movement Festival, "is a tool that people want to use to find liberation." (Shutterstock Image)

Kyndal Saverse wants to help folks move toward liberation. The founder and "probably director" of the Fayetteville Movement Festival says that she's done a lot of jobs in planning this first event, but it's not a one-woman show.

"I have a small team, and then I have a lot of energy exchange support. So there's a lot of hands involved," including 29 instructors who will lead the movement festival participants in various types of yoga, dance, hikes, art workshops, an open mic and more.

"For me, it's a passion project," Saverse says of her brainchild. "I've been a yoga teacher for a while, but I had to stop teaching movement because I became a middle school science teacher. I was commuting for two years to Eureka Springs every day.

"But I got to become a student, which is unusual for movement teacher. Usually you always teach, but I just became a full-on student. I came from a yoga background, but I decided to try everything," she says of the classes that she explored during those two years.

She also says that the Movement Festival "got started because Fayetteville Yoga Festival ended, and I was close with the lady who put that on. And when she told me she was going to sell it, I was going to try to buy it, but I decided I didn't want it to just be yoga," she explains. "My curating this festival is been mainly based off supporting teachers in the area. So it's actually kind of coming together based off what Fayetteville has to offer and like, 'let's all get together and share these resources.'"

Outside of yoga, the festival offers classes in many different types of dance -- contemporary dance, improv, contact improv, hip hop, floor work and others.

"I did not grow up doing dance. But as I got older, I got more interested in dance and finding dance classes was really, really hard," Saverse says, adding that dance classes have become a more popular option at festivals and yoga studios. "I'm just excited to bring it all together and share these teachers with the public, and the public can experience these teachers."

So why should yogis explore dance? Saverse posits: "I think yoga is a tool that people want to use to find liberation. And there's something beautiful about when you practice for long enough, you really tune in to what you want to do and honor yourself.

"That's why eventually, in yoga, you might have students that are not listening to what the teacher is saying. And they're just kind of like, 'OK, thank you for holding space for me, I'm going to sit in child's pose for a bit, or I'm going to take it up a notch, or I'm going to make some weird noises.' And that takes some time and self esteem to build up," she says. "I think dance is just above that, where you're like, 'I am only moving from this place of what feels good, what feels right, what feels true, what feels expressive for what's inside of me.' And it's to me extra liberating."

She sees a creative benefit to movement as well.

"What keeps me coming back to yoga is having a stressful work life. So yoga is the only thing that I feel like can help me release tension that is in my body. I added the art element because I think that for me, personally, all of my ideas come while in movement. I think meditation is great and everything, but I'm more of a person who thinks on my feet, that kind of needs to use my body with my mind and my heart to orient myself. ... I think movement is great for health because it's going to help you navigate where you're trying to go."

Print Headline: Moving On Up