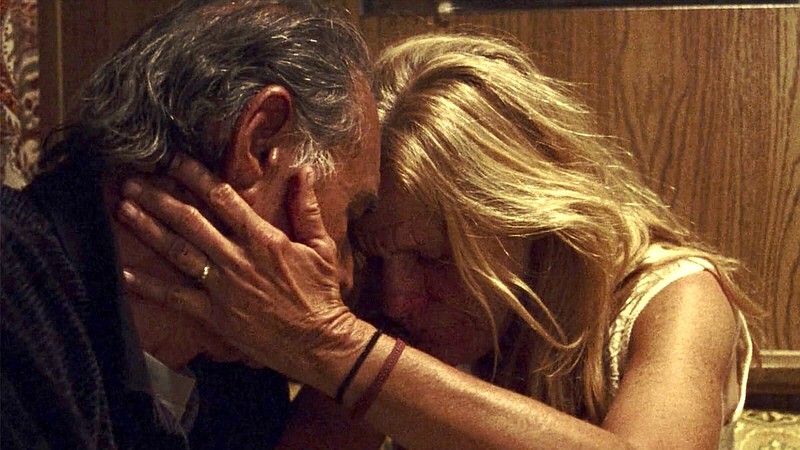 Class reunion: Wes Studi and Dale Dickey star in Max Walker-Silverman’s unorthodox romance “A Love Song,” which was one of the highlights of this year’s Tribeca Film Festival.

Tribeca has returned in full force to New York, with a bevy of films, TV shows, special presentations and virtual programming. Here are some instant reactions to what I've seen so far.

"Cherry": As we first meet her, casually roller skating through sunny L.A. streets, a cellophane backpack loosely hanging off her shoulder, the effervescent, young Cherry (Alex Trewhitt), appears to not have a care in the world.

But a minute later, striding into the bathroom of the costume shop where she works, it becomes pretty clear her troubles are just beginning. She's pregnant, she discovers after testing herself on the toilet (still in her skates), and her DJ/musician boyfriend, Nick (Dan Schultz) isn't getting back to her on the phone. Minutes after that, she loses her job at the store, goes on to get into an argument with her friend, and finds out from her doctor she has 24 hours to make a decision as to whether to keep the pregnancy or not.

Sophie Galibert's indie dramedy follows the usual contortions of the form -- Cherry is a quintessential quirky free spirit who wears red Chuck Taylors and drives a vintage VW bug convertible; her friends and family are all similarly two-stroke types; and the story is told in small time-sequenced scenes as the weekend progresses -- with a game turn by Trewhitt, and lots of recognizable L.A. locations snuck into the mise en scene.

But there's also a different sort of thread woven into this well-worn piece of fabric: As much as the film seems to vibe as a community comedy of sorts, as Cherry makes her way through her various people, including her mother (Angela Nicholas), desperate to send her elderly, easily confused mother (Melinda DeKay) to a nursing home; her hard-driving sister (Hannah Alline), in town from New York, and heartbroken at her failure to get pregnant; Nick, a clueless lout who can't even bring himself to say he much cares about her; you get the sense that for her offbeat charms, Cherry, like most everyone else in her family, is very much alone with the burden of being herself. By design or happy accident, the film isn't nearly as slick and frictionless as it appears to want to be, which makes her decision about the unborn child growing within her that much more weighty. By the end, with a seemingly restored Cherry making her way down the sidewalk in a flower garland, handing out balloons to strangers in the street, it's easy to mistake the film's breezy entreaties for uplift, but, as laid out before us, there's actually very little in her life to support that interpretation.

"A Love Song": Dale Dickey is blessed/cursed with a face that seems to betray her past in every crag and swoop, in this way, it's as if she doesn't have to work to convey the struggle of her characters, just stand in the light and let her wrinkles do the informing. For this reason, she has often been cast as the hard-scrabble matron of rough times, in films like "Leave No Trace," "Hell or High Water" and "Winter's Bone," she has been a virtual stand-in for the pitiless ravages of age and devastation.

In Max Walker-Silverman's bittersweet love story, however, she gets to play a different sort of long-suffering type, the deeply lonely widow, hoping an old friend from her youth might restore her back to the land of the living. Faye is a taciturn sort (in fact, we only learn her name about 50 minutes into the film), staying at a remote campsite on a western Colorado lake, waiting hopefully to meet with her old high-school friend/crush Lito (Wes Studi), himself a widower, who has agreed to meet with her, near where the two of them grew up many decades before.

It slowly becomes clear that Faye is putting a lot of pent-up emotion into this meeting, a chance, she thinks, to not have to spend the rest of her life lonely and alone (and it doesn't get more emblematic of that sort of life to see her at this somewhat forlorn campsite, living out of a cramped camper, and eating nothing but boiled crawdads she fishes out of the lake).

Fortunately, Walker-Silverman isn't after easy or pat answers, though, so the meeting, when it finally does happen, has elements of all sorts of things, including joy and guilt, nostalgia and pain, the chemistry between Dickey and Studi palpable and moving. The film ends on a well-earned note of melancholy, but remarkably keeps from being a straight downer. We may feel Faye's grief, but we also get a sense of her inner strength, the means we have as humans to keep on keeping on despite our disappointments.

"Sophia": It's not uncommon for the protagonists in a documentary, often shot over several months, if not years, to change their appearance, at least here and there. But in Jon Kasbe and Crystal Moselle's doc about the brilliant AI entrepreneur David Hanson, their primary subject seems to change his hair and facial hair in almost every scene: He goes from full beard, to clean shaven, from mustache, to scruff, to elaborate, elongated sideburns. It seems to suggest some of his restless energy, his inability to stay still long enough to establish exactly who he is (even as it is absolutely devastating for the film's continuity).

Much of this film, which follows his arduous work on the Sophia robot, an AI construction with a disarmingly life-like rubber face (he and his team work endlessly to create her facial expressions, making them more natural looking), and his attempts to attract enough wealthy investors to help make his dream of a robot-enhanced future a reality, relies on his perpetually cheery outlook to power forward. You can practically feel the Philip K. Dick vibes coming off his vision -- what is Sophia if not an early prototype of a Replicant? -- but Hanson, under constant pressure from his staff, family (including his cancer-stricken mother), and the investors he does reach, seems an unwitting sort of man to bring about a sort of Terminator-level doom.

Endlessly affable and relentlessly positive, he takes each affront and blow (including the various times in which Sophia doesn't work properly as he's standing in front of an expectant crowd) with grace and equanimity. He and his team, based in Hong Kong, hit the event circuit with one version of Sophia (there are many models from which to choose), in an attempt to wow the crowds at TED talks and high-level tech conferences into furthering his funding. He's already walking a very taut tightrope as covid-19 suddenly hits, after he's traveled to New York for yet another conference.

In the wake of the pandemic, with events all but shut down, Hanson is forced to beg his investors for enough cash to continue on, but his pleas fall on deaf ears. It's not until the very end, with footage taken a year later, that we get to see how this most optimistic of people has managed to stay afloat. It's hard to say entirely what our takeaway is meant to be about Hanson, and the class of restless innovators he represents, but you certainly do get a strong sense of the type of purgatory these sorts of visionaries must contend with in their allotment of time on this mortal Earth, having to convince people with stacks of money and no imagination whatsoever to buy into what you can plainly see as an enormous advancement of humankind's future, while still being forced to keep their vision economically viable enough to attract them. On one such phone call, Hanson explains to an investor how history has shown enormous amounts of money can be made following such futurists. Yes, he's told, but a lot of the visionaries are long dead before any serious money can be made from their innovations.