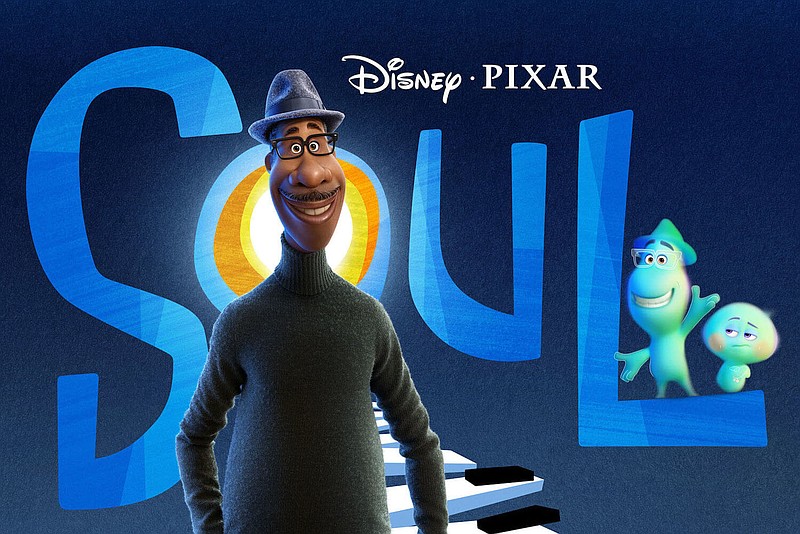 Don't call it an escape room, says Terri Trotter, president and chief executive of The Jones Center, of the new immersive exhibition at the JTL Shop in downtown Springdale. "It's not at all like that.

"The Worst-Case Scenario Survival Experience" is, she says, "best described as an interactive 'survival challenge. It's a full-body, 'hands-on, minds-on' experience that is part learning games and activities and part obstacle course and physical activities."

What she hopes it accomplishes is easier to explain.

"Our goal with the exhibit, besides families having fun, is to activate new spaces on our campus and to add more activities to downtown Springdale. And we want people to both have fun and, hopefully, learn something."

Trotter is well known to Northwest Arkansans, having been with the Walton Arts Center for 15 of its formative years, starting in communications and ending up as chief operating officer. She left in 2014 to run the Sun Valley (Idaho) Center for the Arts, an organization that in addition to presenting lots of different artists and bands, also had a professional producing theater and a contemporary art museum. Then she moved on in 2016 to the Midland (Mich.) Center for the Arts, which included "theaters (a 1,500- and 400-seat) where we presented everything from touring Broadway to speakers to artists from around the globe; museums (with art, history and science); and rehearsal/gathering space," along with managing the Midland Symphony Orchestra and producing a regular season of community theater.

So Trotter came back to Northwest Arkansas armed with everything she'd need to take the Jones Center -- opened in October 1995 as the Jones Center for Families by philanthropist Bernice Jones, the widow of Jones Truck Lines founder Harvey Jones -- to a new level.

"It is a flagship Springdale entity, and as Springdale continues to grow and evolve, I know the Jones organization can be on the forefront of collaborating to strengthen the efforts," she said in January, when she announced her new job. "Above all, I see the Jones Center as a key partner and collaborator in continuing to develop Springdale and Northwest Arkansas as one of the most desirable places to live and work in the country.

"In addition, the Jones Center has a commitment to inclusion and diversity and to being a place where everyone feels welcome. There is an incredible legacy, and I can't wait to work with the team to continue building and evolving the organization."

"In my previous position, I ran an interactive science museum, and we often had touring exhibits come through," Trotter says. "This show came from a company with whom I've worked in the past, and dates and times aligned for us to bring it to Springdale. This is a new exhibit -- it was created in 2019 just before the pandemic -- so I liked that we could be one of the first places to have it available for people."

As Trotter describes, "there are two types of activities within the exhibition: the Hall of Fame exhibits and the Survival Gymnasium Challenges activities. The Hall of Fame introduces guests to the stories of real-world survivors -- first responders, wildlife rescue workers, psychologists, physical trainers and everyday people -- through artifacts, photographs and video. The Survival Gym is where guests tackle unexpected -- but possible -- real-life scenarios, such as defusing a bomb, leaping from a train, landing a plane, escaping from a sinking car and outsmarting a variety of angry animals, with plenty of fun and excitement along the way.

"In addition to the challenges mentioned above, other experiences include the Germ Tunnel, the Lock Picking display, the Disguise Display, Storytime with Burt, the Flatulence Display and the Climbing Wall," Trotter adds.

"For visitors to the exhibit, besides being a laugh a minute, the exhibition is a STEM-based learning experience that prompts kids and adults to think on their feet and rely on their tinkering and decision making skills," she goes on. "As guests immerse themselves in the real worst-case scenarios in the Survival Gym, they are encouraged to exercise their creative thinking skills, test their problem-solving precision, and approach extreme situations with ingenuity."

Trotter says guests usually spend 45 to 60 minutes investigating "The Worst Case Scenario," and with the exhibit open through Oct. 14, "there is plenty of fun for repeat visitation."

Beyond that, it's intended to illustrate the Jones Center's "core values – family and community; inclusion; fun and learning," Trotter says. "The exhibit is multi-generational and bi-lingual -- Spanish and English -- and we have translated it into Marshallese as well. It's an opportunity for people to engage in fun and physical play while also learning and being together. Inclusive opportunities are central to who we are, so we want people from different backgrounds, different communities, even different states, to be able to enjoy it!

Trotter says "The Worst-Case Scenario Survival Experience" is "representative of the new kind of visitor experience The Jones Center is bringing to families and the community in the heart of downtown Springdale."

"With amenities like the region's only indoor ice arena -- in fact, one of only two in Arkansas! -- and the world-class Runway Bike Park, The Jones Center has long been Northwest Arkansas' leading destination for family recreation, fitness, and learning," she posits. "We are in the process of master planning the campus to make it more inviting, more connected with downtown and the bike trails, and more relevant and interactive for people from all over Northwest Arkansas. As we grow and develop with downtown Springdale, we will build on our education and outdoor programming, including new opportunities in arts, culture and education for kids and adults.

"Activating the exhibition in the newly remodeled space at The JTL Shop makes sense because of its central location downtown," Trotter adds. "We plan to continue activating different areas of the campus, and especially those in most proximity to downtown, with unique programming even after the exhibition."

The Jones Center also has more immediate plans. The first Jones Center Cinema Plus, an open-air movie and music night, was June 17. Trotter hopes the series -- which continues July 22 with the animated film "Soul" -- "invites families to experience summer at The Jones Center like never before" and "connects the community through film, food and live entertainment."

There's also "a brand new program this summer for teens who are passionate about Broadway and musical theater," Trotter adds. Broadway Full Out brings New York artists from Broadway Imagined to The Jones Center June 27-30 for "an intensive workshop ... open to rising ninth-12th graders and 2022 high-school graduates." Registration is under way now at thejonescenter.net.

"In addition, we will be announcing a series of culinary experiences later in the summer," Trotter teases. "These are date night/girls night out type events that provide hands-on cooking experiences -- along with eating, socializing and fun.

"The Jones Center is looking to the future and specifically at how we can best use our campus – 50+ acres – in downtown Springdale to maximize the value we offer to the community," Trotter concludes. "There are exciting things happening in downtown and evolving activities on our campus and ensuring that we both help drive and support that uniquely Springdale growth is important." 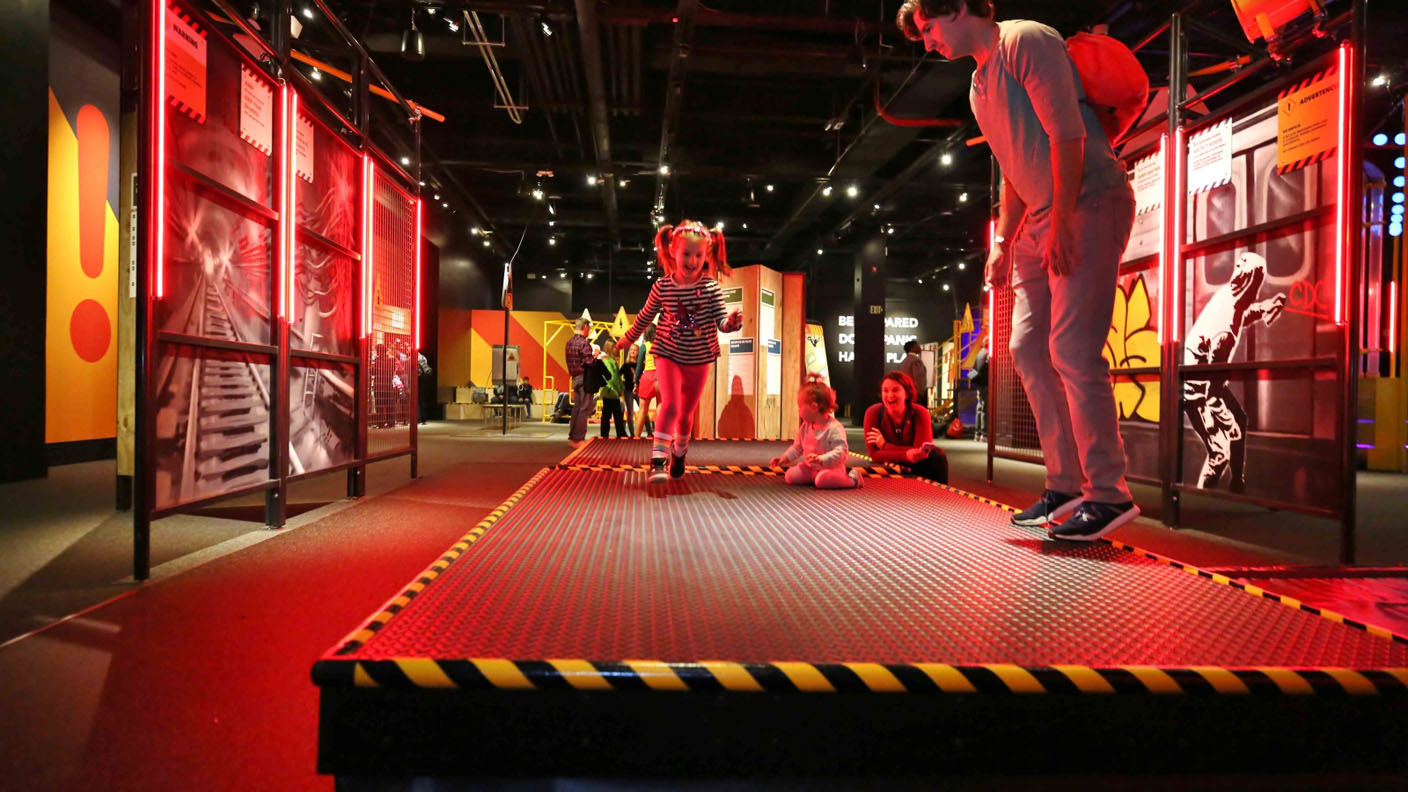 Inside the immersive exhibition, visitors get a chance to test their skills in possible real-life scenarios, like jumping off a train. (Courtesy photo) 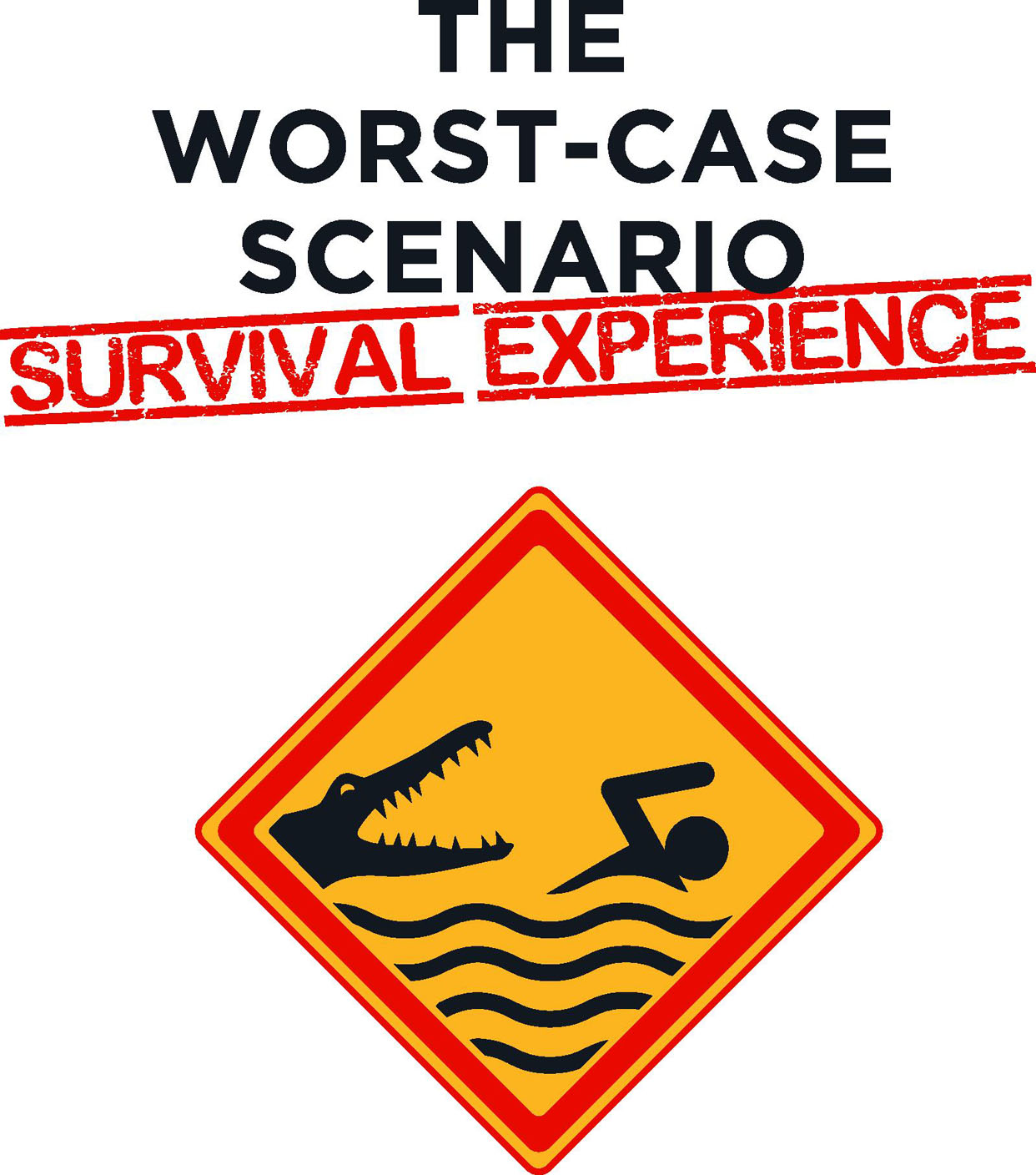 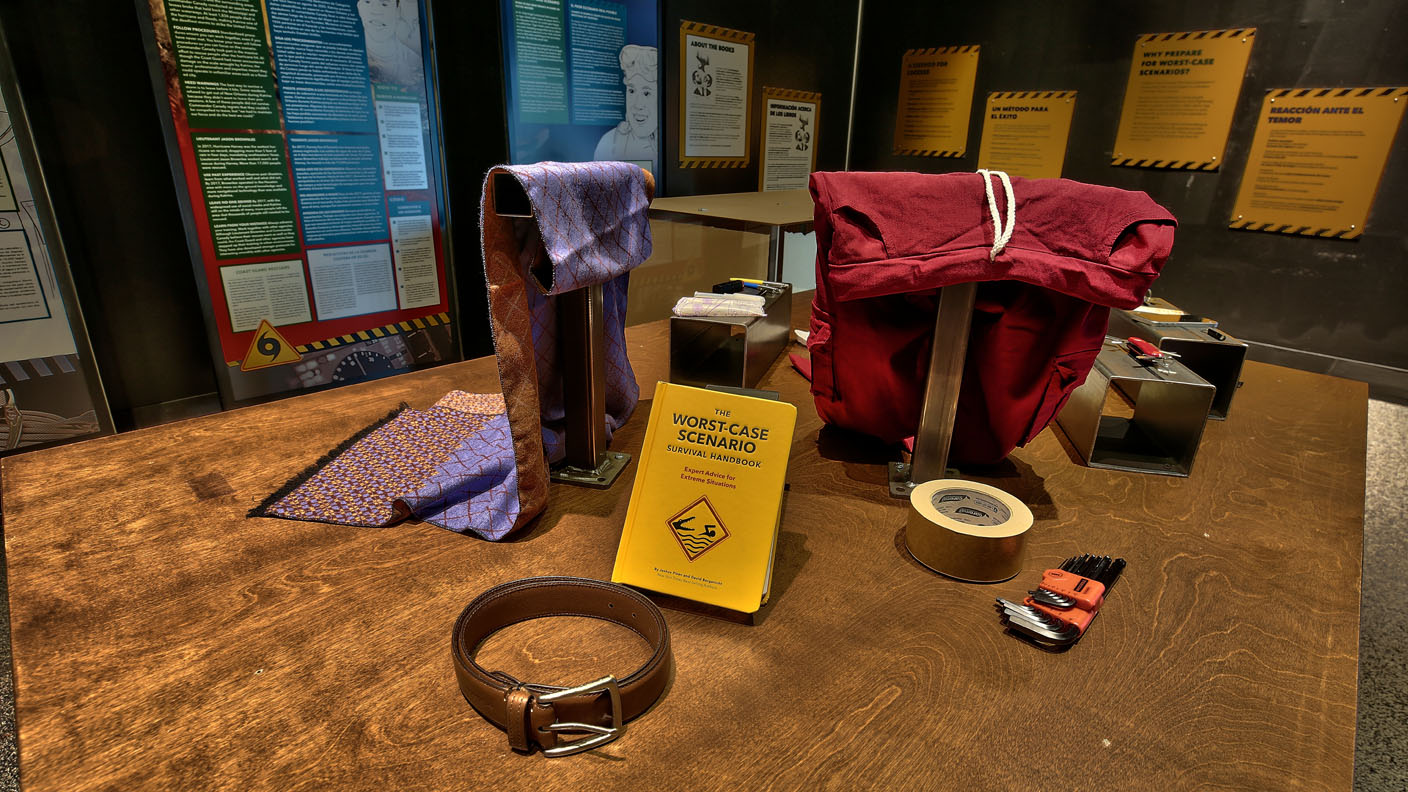 There are two types of activities within the exhibition: the Hall of Fame exhibits and the Survival Gymnasium Challenges activities, says Jones Center CEO Terri Trotter. The Hall of Fame introduces guests to the stories of real-world survivors — first responders, wildlife rescue workers, psychologists, physical trainers and everyday people — through artifacts, photographs and video. The Survival Gym is where guests tackle unexpected — but possible — real-life scenarios, such as defusing a bomb, leaping from a train, landing a plane, escaping from a sinking car and outsmarting a variety of angry animals, with plenty of fun and excitement along the way. (Courtesy photo) 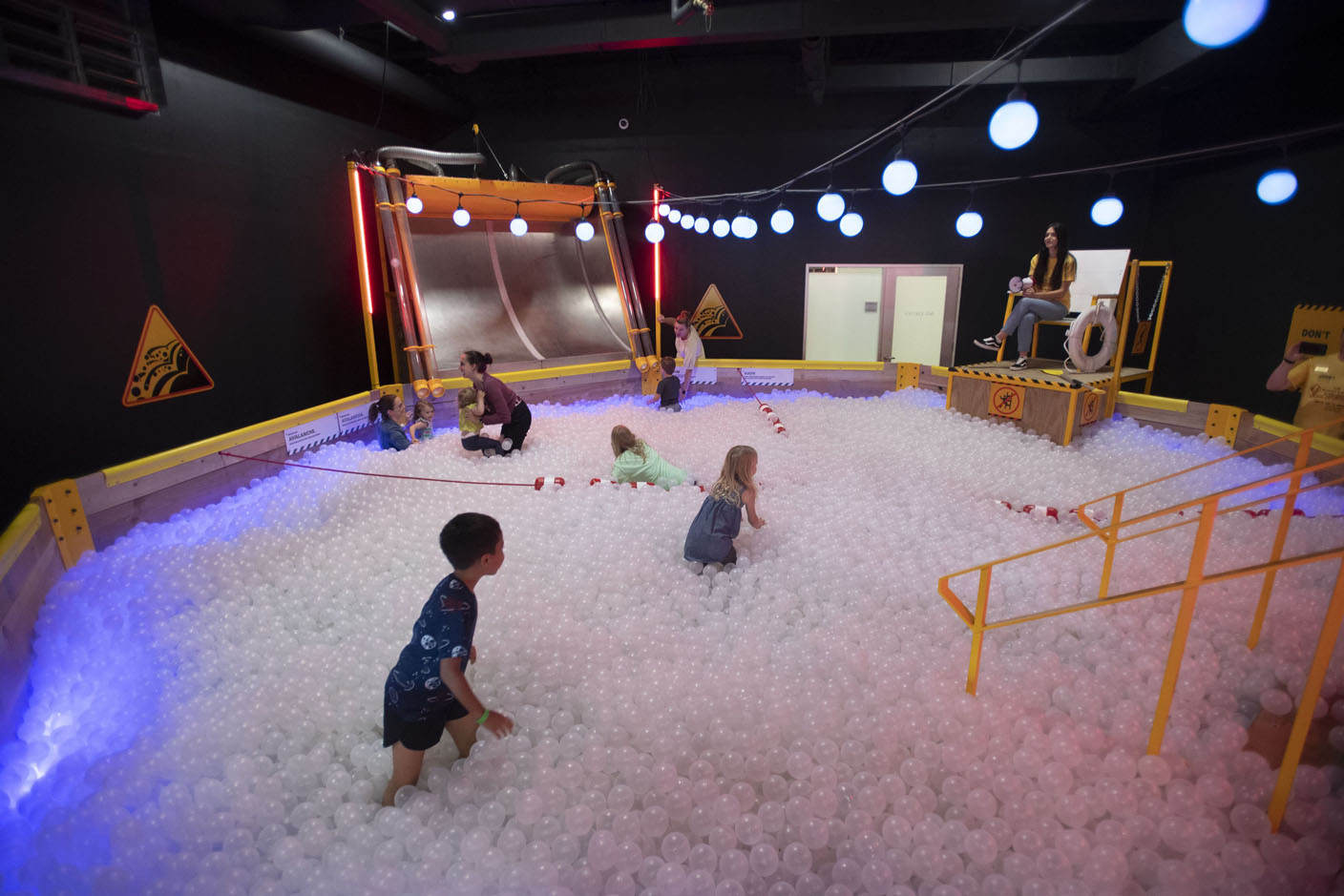 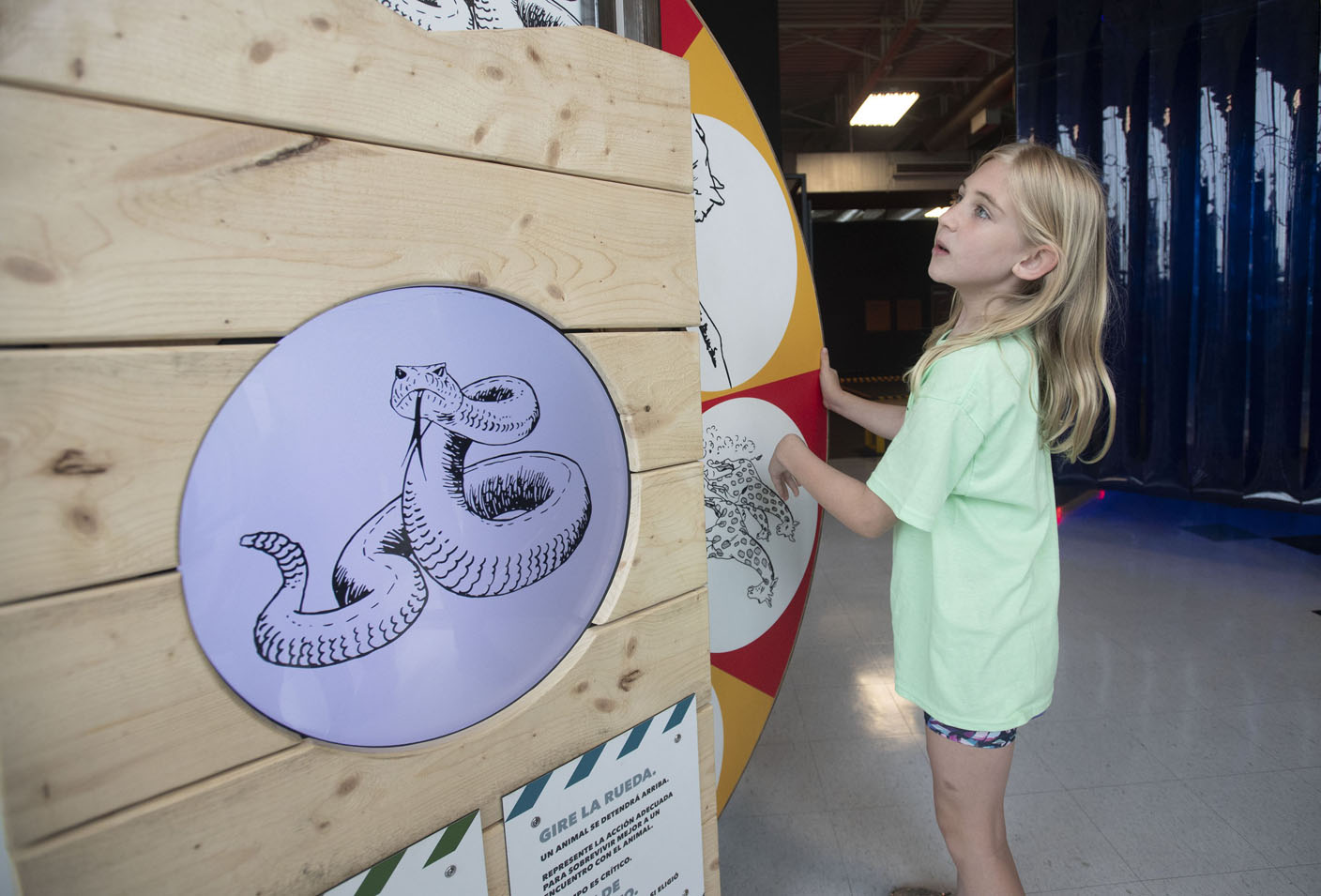 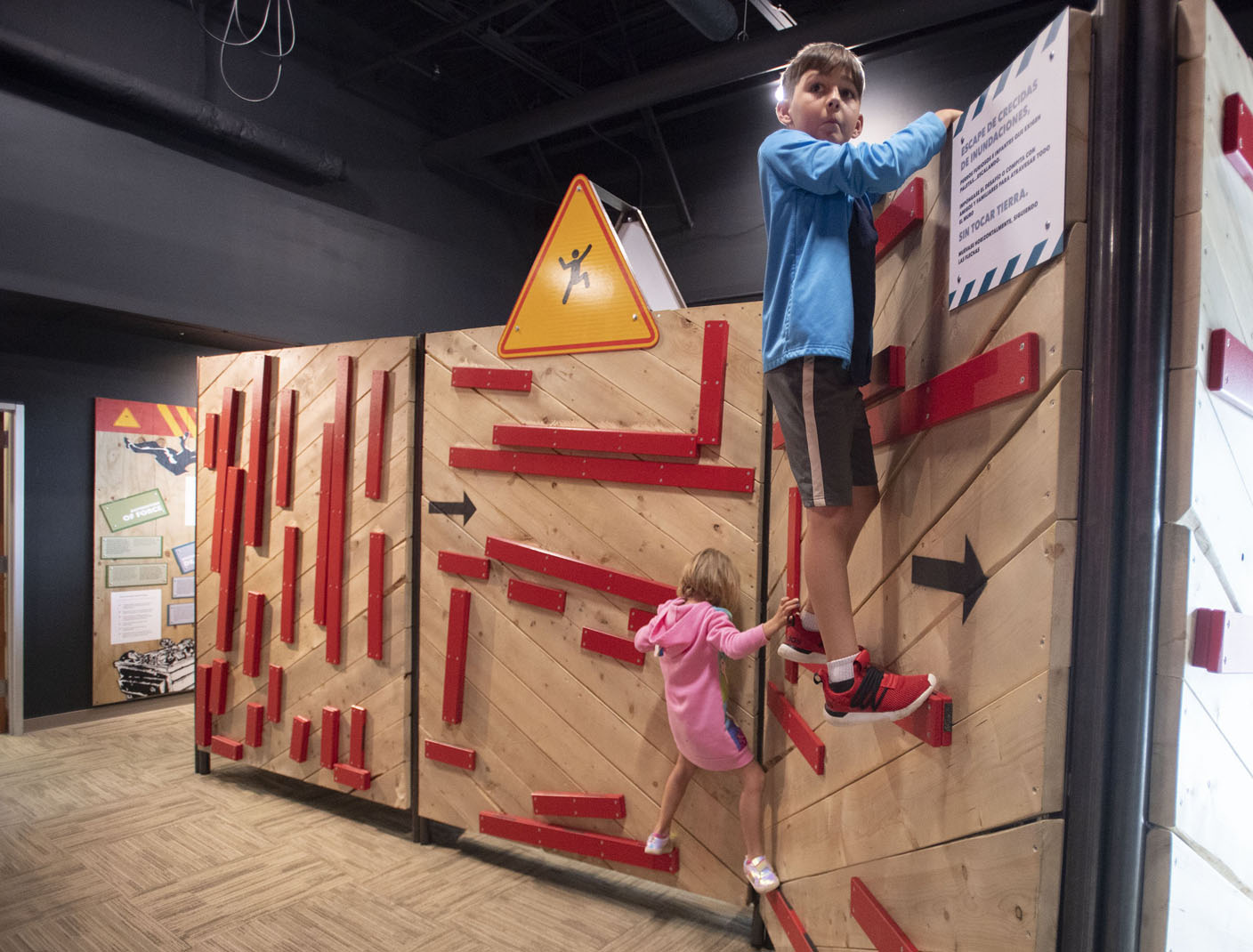 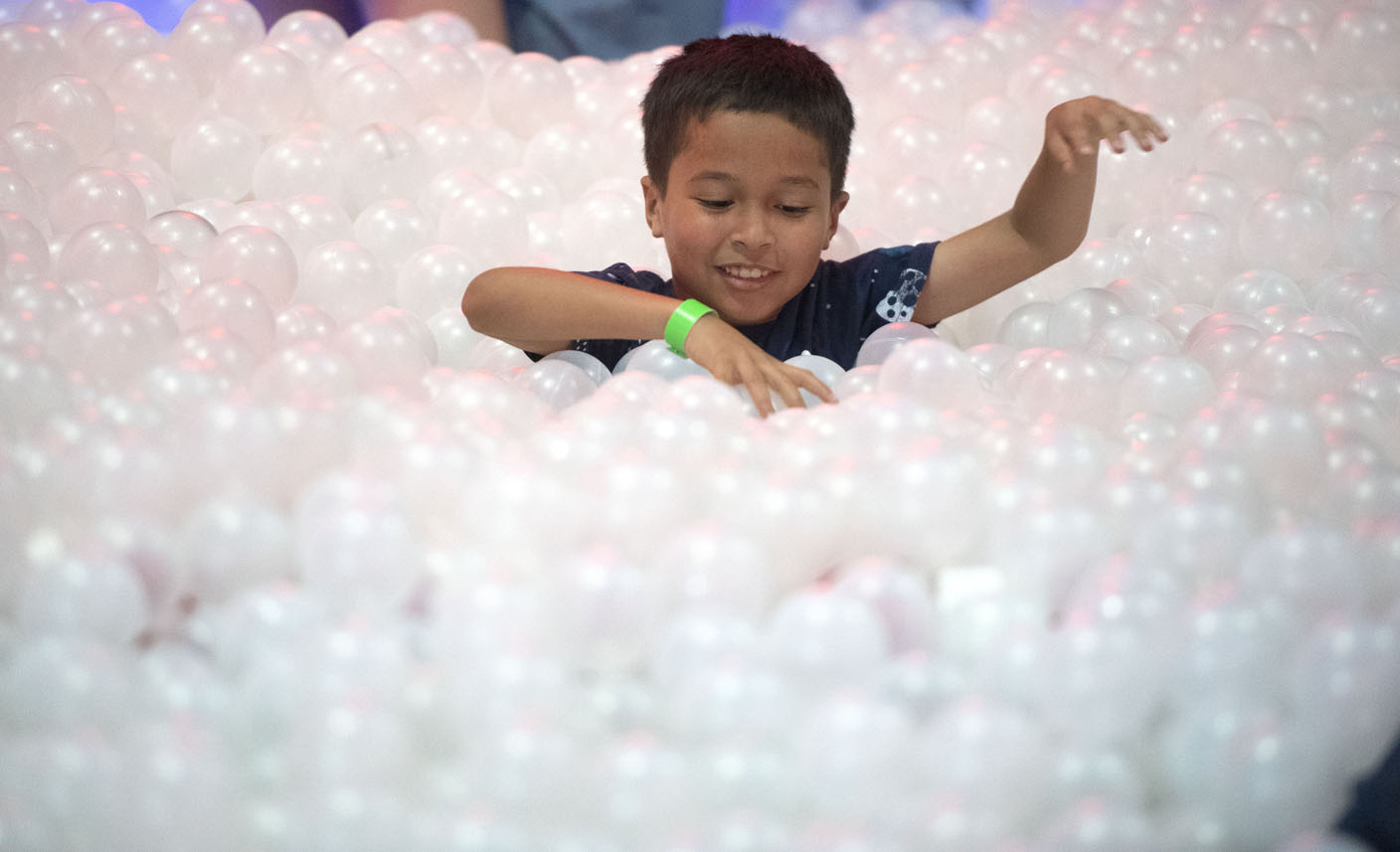 Thomas Guod, 9, tries to figure out how to get out of an avalanche simulator at "The Worst Case Scenario Survival Experience," a bilingual touring exhibition that The Jones Center is hosting this summer at The JTL Shop in downtown Springdale. (NWA Democrat-Gazette/J.T. Wampler) 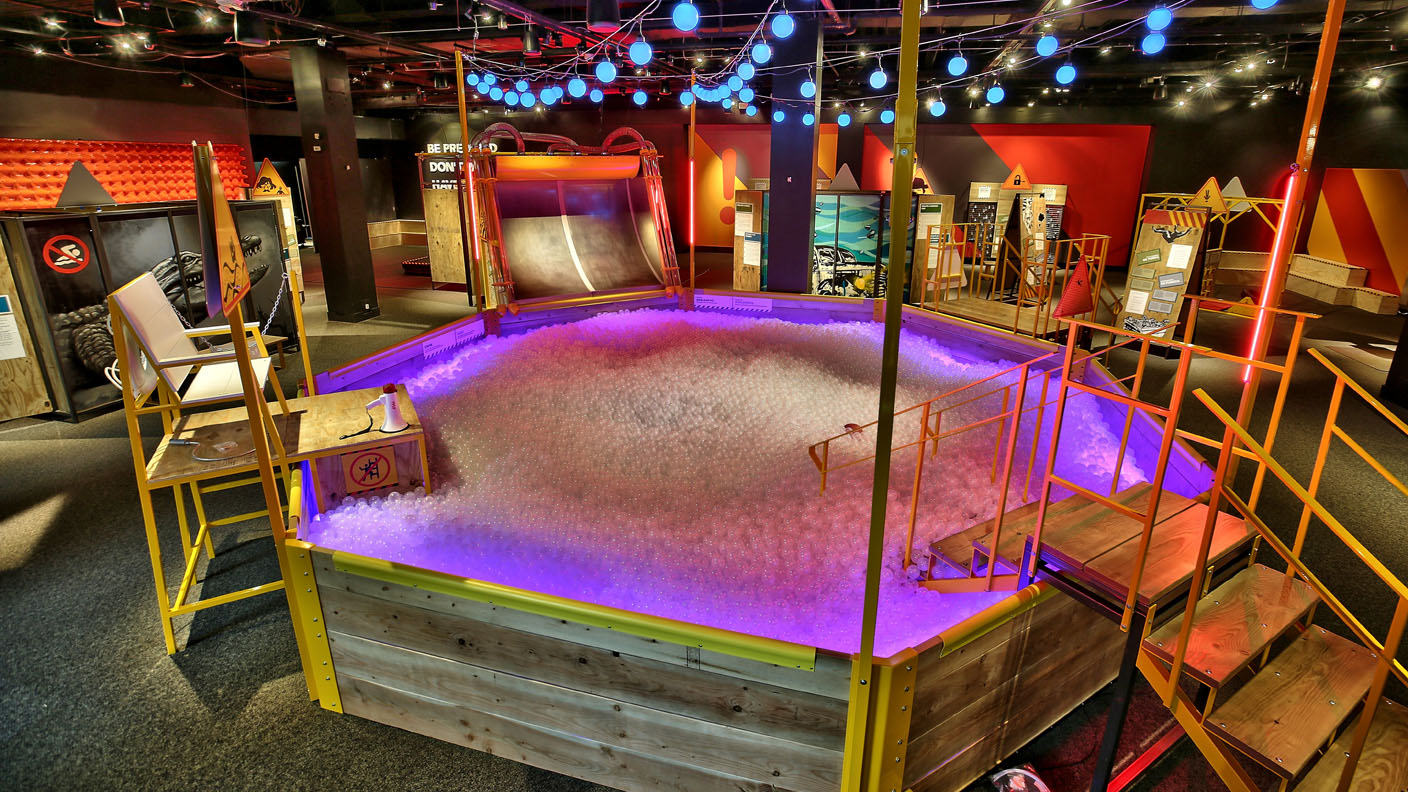 A ball pit gives visitors to "The Worst Case Scenario" a chance to figure out how they'd escape from an avalanche. (Courtesy photo)
More News