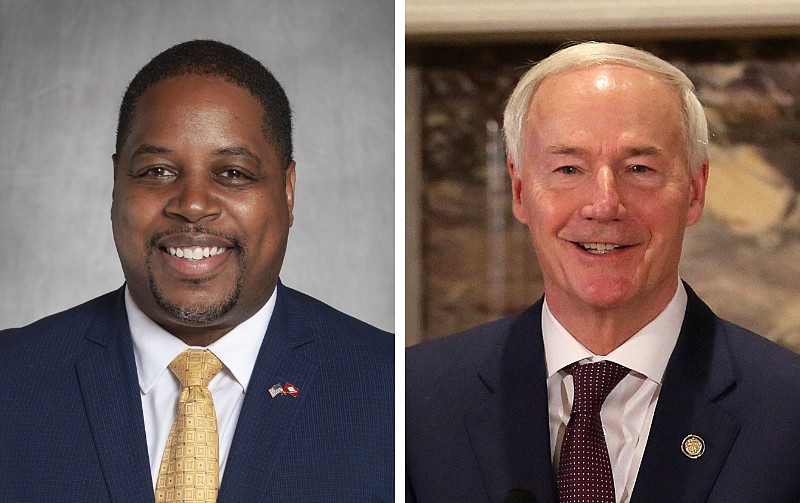 The Democratic nominee for governor of Arkansas said Wednesday he supports the idea of a gas tax cut to combat rising prices across the nation, but Gov. Asa Hutchinson said the concept isn't workable.

"One thing we have heard so far is that Arkansans need relief at the gas pump," nominee Chris Jones said during a Political Animals Club event at the Governor's Mansion. "Weeks ago I shared that if I was governor I would put in place a temporary relief from gas taxes."

Jones' comments at the Governor's Mansion came on the same day that President Joe Biden called on Congress to temporarily suspend the federal gas tax in an effort to combat high fuel prices. Biden asked Congress to lift federal taxes on gas through the end of September, and asked states to suspend their own gas taxes.

The average price of a gallon of gasoline in Arkansas was $4.50 on Wednesday, down from $4.54 a week ago, according to AAA.

Jones' idea seemingly follows concepts that have been floating around in federal government, and he said Wednesday he was pleased to hear of Biden's efforts to pause the federal gas tax.

Hutchinson, a Republican, said the state's gas taxes comprise both a per-gallon tax and a sales tax and have been set by constitutional amendment or by law.

"I do not have authority to suspend the law or the constitution," Hutchinson said in an emailed statement.

The governor also said Biden's suggestion that states suspend gas taxes is not workable and will not provide the relief intended.

"The funds generated by gas taxes are committed to ongoing projects and a loss of these revenues would jeopardize the state's ability to fulfill its obligations," Hutchinson said. "We all want to help the taxpayers, but the best way is to reduce the tax burden, and we are working to lower taxes to put more money in the pockets of hardworking Arkansans."

Jones said his proposed gas tax cut would be a temporary suspension and isn't a long-term solution to the problem of inflation.

"Part of the challenge is while it certainly does drain some of the infrastructure funding, the bigger problem is that folks are struggling in their pocketbook now and we have people having to decide between paying for gas to get to work and paying for different needs," he said.

"It's not something we need to continue for a long period of time, but it does provide some relief specifically during the hot summer days when we can't leave people out in the heat," Jones added.

Sanders said in a news release that she sat down with energy leaders from across the state Wednesday and they spoke about fostering growth of the state's energy sector, taking an all-of-the-above approach to provide reliable and affordable energy to Arkansans.

"As President Biden continues to destroy our economy with his America-last energy policies and beg other nations for foreign oil, it's time to unleash the resources we have right here at home," Sanders said in a news release. "As governor, I will enact bold, conservative reforms to create an environment that allows the energy industry to continue to invest and diversify.

"A strong economy and a reliable, growing energy sector will create opportunity for every Arkansan and help take our state to the top."

Hutchinson said earlier this month that it's time to use some of the state's surplus to provide relief to Arkansans.

"We have a surplus as of this coming June 30th of $1.5 billion. In other words we have collected $1.5 billion more in tax revenue then we need to meet our budget," he said. "At the same time the workers of Arkansas are struggling with high inflation and gas prices, and we need to return part of that surplus.

"We need to provide tax relief, and the simplest way to get more money in people's pockets is to take less from them. And so that could wait until January, but gas prices are high now. There is some urgency there, and I am hoping to reach an agreement with the General Assembly so we can provide that tax relief and get more money in people's pockets."