COOKING FOR TWO: Tacos with tempeh a twist on the standard fare 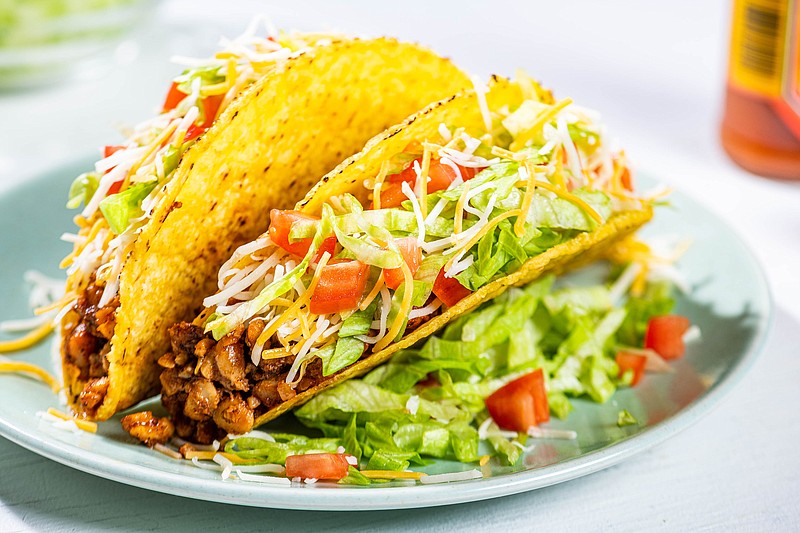 Crunchy Tacos With Tempeh (For The Washington Post/Rey Lopez)

In 2015, the taco — a staple foodstuff for millions of people — got its own emoji. But that first draft, with its yellow, crunchy-looking tortilla, layer of brown meat, shredded orange cheese and red and green pixelated garnish, was the subject of much disdain.

"While Emojipedia describes the new character as 'a Mexican food item,' the taco depicted by Apple isn't Mexican at all," Caitlin Dewey wrote in 2015 for The Post. "Crispy taco shell, strips of lettuce, shredded yellow cheese: This is the stuff of American fast-food chains, not Mexican cuisine."

Indeed, taco experts and fanatics in Los Angeles were quick to dismiss the emoji, calling it inauthentic and a "gringo taco" dreamed up by Big Fast Food. There was truth to that critique: Taco Bell put its money and mouth behind the campaign to get a taco emoji, so it's no wonder that most taco emoji on the various operating systems still look like the chain's signature taco.

A year later, Apple redesigned its emoji to feature a soft tortilla and pleasing melange of fillings. Lots of people say it is a somewhat more accurate representation of the Mexican dish. But is Apple's soft taco emoji more authentic?

The tacos I grew up eating were a multicultural mix: My Puerto Rican dad would add sazon to the meat mixture, and my Iranian mom would put thin french fries atop the stewed filling. Herbs, shredded iceberg and orange colby were the main garnishes on tacos built into crunchy shells, soft flour tortillas or even lavash.

In my 20s, I moved to Southern California, arguably the world's leading taco capital outside Mexico. There, among the many taco trucks and gas station stalls, rich, tempting spits and white-hot griddles, is Mitla Cafe. Since 1937 the small restaurant has served a generous variety of homestyle Mexican dishes, including chiles rellenos, enchiladas and tamales. Also on the menu? Tacos dorados, or what many north of the border call crunchy tacos.

It's not a stretch to say that Taco Bell wouldn't exist if it hadn't been for Mitla. It was at Mitla in San Bernardino, Calif., that Taco Bell founder Glen Bell had his first taste of a crunchy, fried taco shell filled with meat, salsa and shredded cheese.

My point is: Authenticity is a myth. So, I'll always have a soft spot for all kinds of crunchy tacos, whether they're the puffy tacos popular in San Antonio or the Americanized hard-shell tacos with orange cheese. Golden on the outside and filled to the top lip of their shell, these tacos dorados are proof positive that Mexican culture is alive and well in the U.S. Just like all the different taco emoji, there's a taco for every taste.

This variation on the crunchy taco substitutes crumbled and sauteed tempeh for the meat. (Tempeh is a fermented soybean cake.)

It's a neat party trick, and one I think you should try for dinner tonight.

Crunchy Tacos With Tempeh (or Tofu or Meat)

In a large cast-iron skillet over medium-high heat, heat the oil until it shimmers. Add the tempeh and onion and cook, stirring occasionally, until they start to brown, about 8 minutes. Add the garlic and cook, stirring, until fragrant, about 1 minute. Stir in the tomato paste, letting it toast slightly and begin to brown and coat the tempeh, about 2 minutes. Stir in 2 tablespoons water and the taco seasoning. Taste, and adjust seasoning and add more water, if desired. Remove from the heat.

To build the tacos, scoop about ½ cup of the tempeh crumbles into each taco shell or tortilla. Divide the cheese, if using, and lettuce and tomatoes among each taco shell. Top with the sour cream, salsa and hot sauce, if desired, and serve.

Notes: If using ground beef, lamb or turkey, omit the oil, as the meat will contain enough fat to saute the other ingredients.