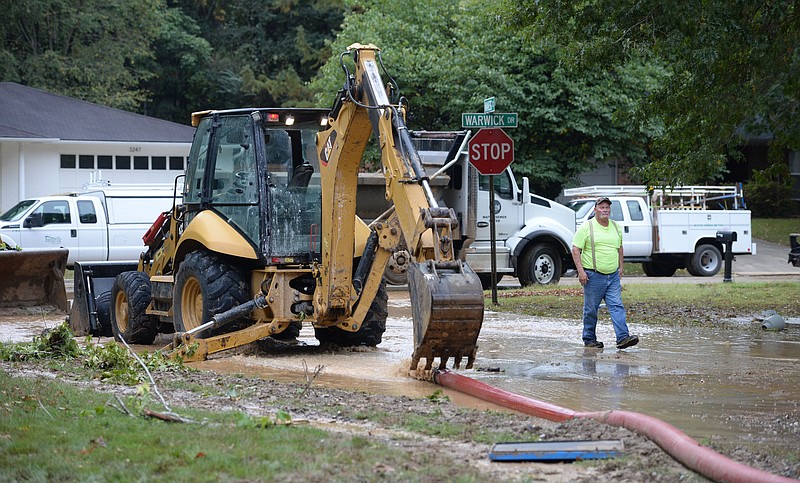 City of Fayetteville Water and Sewer Operations workers remove water Tuesday, Sept. 21, 2021, as they excavate beneath Makeig Court after what was identified at the scene as a 36-inch water transmission line beneath the street ruptured Monday evening. The line supplies water from the Beaver Water District to the city of Fayetteville. Visit nwaonline.com/210922Daily/ for today's photo gallery..(NWA Democrat-Gazette/Andy Shupe)

FAYETTEVILLE -- City Council members on Tuesday agreed to compensate a couple whose home was extensively damaged after a water main break and, as a separate item, discussed proposed changes to water and sewer rates.

The council voted 7-0 to pay residents Jim and Pat Knepp the full amount requested for damage to their home that was the result of a massive water main break in September. The home is on Makeig Court, a cul-de-sac off Warwick Drive in the northeast part of town.

Millions of gallons of water were lost from the break. Residents were asked to conserve water until Sept. 23, when service was restored.

The total reimbursement the Knepps requested was $40,707. The amount was to repair the foundation of the home, as well as for damaged landscaping and personal belongings. The amount also was to cover materials purchased and other related expenses for repairs done to the home. The city so far has provided the property owners $8,000, Utilities Director Tim Nyander said.

Before the vote, the council approved increasing the dollar amount the city can compensate residents related to a damage claim from water or wastewater breaks. The move allows the city to pay a property owner up to $50,000 in an extraordinary case, raising the amount by 25% from $40,000.

City Attorney Kit Williams said raising the amount was appropriate considering the original amount was set a decade ago, and inflation has set in since then. The council passed the change with an emergency clause, meaning it became effective upon adoption.

In other business, the council heard a presentation from international consultant firm Black & Veatch on proposed changes to the city's water and sewer rates.

Rates would remain the same for residents inside the city limits. However, rates could change for customers who live outside the city. Administrators said current rates can't support capital needs at the city's two wastewater treatment plants. The last rate study was done 14 years ago.

West Fork Mayor Heith Caudle said a proposed increase in sewer rates would disproportionately affect his city's residents. West Fork finished hooking up its sewer service to Fayetteville in 2020. West Fork's former sewer treatment plant was obsolete, and in 2014, state inspectors found solid waste overflowing into the White River during heavy rain. West Fork agreed to a consent administrative order with the state to improve its infrastructure and to begin work to connect to Fayetteville's system.

West Fork used bonds to pay for the $10 million project to connect its sewer service to Fayetteville. The two cities agreed to rates once the project finished.

Caudle said West Fork has already had to use reserve money to pay for Fayetteville's pass-through sewer service. He asked the council to consider lowering his city's sewer rates, as opposed to raising them.

A public hearing on the matter will be held July 19 at Fayetteville's City Hall.

• A $73,550 contract with Planit Geo Inc. to develop a 10-year urban forestry plan as required by city code.