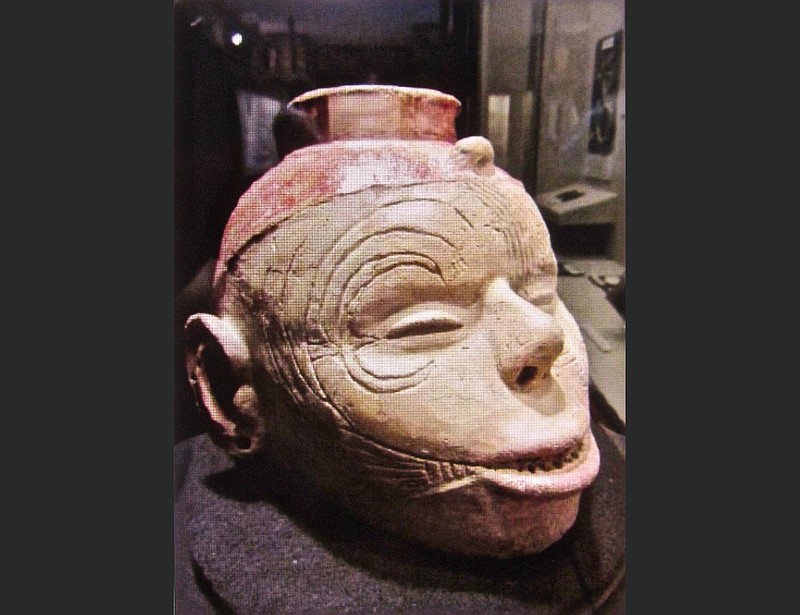 WILSON — At Disneyland, this human face might belong to a talking robot programmed to deliver a taped spiel about life in some prehistoric Fantasyland.

At Hampson Archeological Museum State Park, on Wilson's town square, the face is silent — though it could speak volumes. Its entrancing visage belongs to a priceless piece of American Indian pottery known as a headpot.

Visitors can apply their imagination to picture the 15-acre palisaded village in today's Mississippi County that was inhabited by the headpot figure's Upper Nodena Culture from about A.D. 1400 to 1600. They'll be guided by nearby details posted in the sleek 8,500-square-foot complex that opened in late 2019.

The nonpareil prehistoric vessel would merit a place of pride at a museum in New York or any other metropolis. It is described in a park brochure as probably picturing "a person of high status such as a political or religious leader, renowned warrior, deceased revered ancestor or a war trophy, as it is believed decapitation of an enemy was common."

Pottery and other artifacts in glass cases dominated the previous museum, one-fifth the size of the new layout. Unearthing of the many objects from the Late Mississippian Period was begun in the 1920s by Dr. James K. Hampson, a devoted amateur archaeologist for whom the state park is named.

In the new museum, visitors can enjoy a mix of hands-on activities. Exhibits breathe life into the people who occupied the Nodena Site, on a nearby horseshoe bend of the Mississippi River, until two centuries before the first Europeans settled in today's Arkansas.

One eye-catching display is a three-dimensional tableau that shows a Nodena father and son playing "chunkey," a betting game that involved stone discs and spear-like sticks. Given the culture's lack of a written language, whether Nodena men actually played chunkey is largely a matter of informed speculation.

A posting explains the game: "After one male competitor rolled a stone disk, he and his opponent threw spear-like sticks to where they thought it would stop. The closer stick earned points." The game "likely honed skills needed for hunting and warfare." It "drew spirited betting. Intricately worked playing stones were cherished."

One interactive display, "Your Personal Pottery," shows the silhouette of a villager's face on a magnetic board along with an assortment of attachable designs. Visitors are invited to create their own facial patterns by fastening variously shaped pieces inspired by pottery from the Nodena Site.

Another hands-on exhibit, "Build-a-Being," explains that the village's residents envisioned a three-level universe with distinctive inhabitants. The Above World was for birds. People and land animals lived in the Middle World. Inhabiting the Below World were reptiles and river animals.

Upper Nodena pottery is shown at Hampson Archeological Museum State Park. (Special to the Democrat-Gazette/Marcia Schnedler)  Fantasy creatures in this cosmos had elements from two or three levels, such as a winged serpent. Visitors can "turn the blocks to create a creature that captures your imagination. Why did you select these elements? How would you expect your creature to behave?"

It is unclear what led to the disappearance of the Nodena people by the 17th century. A museum note speculates that "eventually, droughts hampered agriculture. And, like many other Mississippian communities, these people would suffer, directly or indirectly from encounters with Hernando de Soto's 1541-1542 Spanish expedition. The people who lived here soon vanished." European diseases may have finally done them in.

The new Hampson museum is another step in efforts to revive Wilson, which was founded in 1886 as a model company town with a main square largely rebuilt in the 1920s in English Tudor style. After the Lawrence Group bought the site in 2010 from Lee Wilson & Co., the ongoing improvement began.

The museum sports a Tudor-style facade with a wood-shingled roof that matches the rest of Wilson's town square. The building belongs to the city of Wilson, which provided funding along with the Lawrence Group. Wilson Cafe, on the square, serves some of the best meals of any restaurant in an Arkansas town with fewer than 1,000 residents.