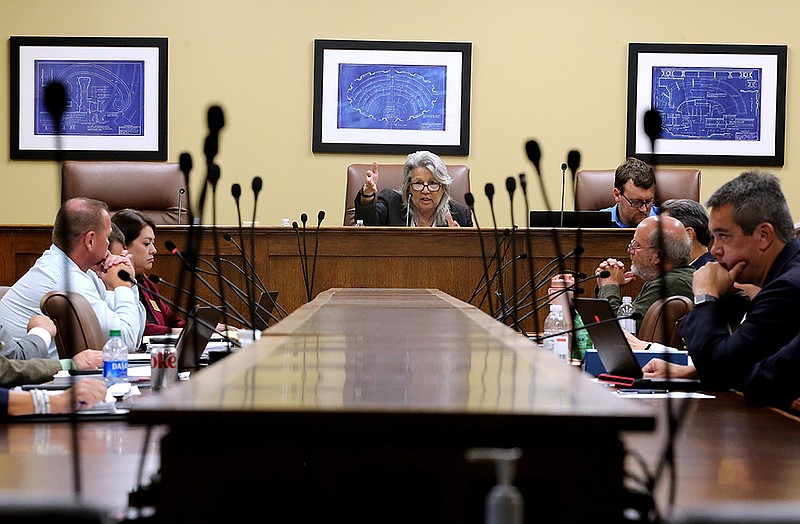 Cheryl May (center), chair of the Arkansas School Safety Commission, speaks during the commission's first meeting on Tuesday, June 14, 2022, at the state Capitol in Little Rock. Gov. Asa Hutchinson reinstated the commission last week in the wake of recent events around the nation and an increased concern about safety in Arkansas schools. (Arkansas Democrat-Gazette/Thomas Metthe)

With no clear profile of who might open fire in a school classroom in hand, the Arkansas School Safety Commission on Tuesday resumed its mission to identify as many barriers as possible to prevent the state's schools from becoming points of tragedy.

The first meeting of the reconstituted Arkansas School Safety Commission was mainly for a refresher course on its previous recommendations from 2018 and the assignment of members to subcommittees. However, the session also allowed for some discussion on the future of school security and prevention.

Dr. Cheryl May, director for the Criminal Justice Institute and head of the Arkansas School Safety Commission, said beyond the recommendations from 2018 there are other measures being looked at and implemented to prevent school shootings in the state.

May said many Arkansans face more adverse childhood experiences than others elsewhere in the country. She said this is why the Criminal Justice Institute and the Arkansas Center for School Safety are working to implement the Arkansas PAYcheck Program statewide.

"The program stands for protecting Arkansas youth, and it focuses on communication between law enforcement, the Department of Human Services and community corrections in our schools, because often a child is traumatized outside a school," she said. "By implementing this program when these events are identified then we can have a note sent directly to a key person at the school that a child has been traumatized. This allows law enforcement and school personnel to become more effective in childhood trauma response."

May also cited two U.S. Secret Service reports on school shootings as analyses the committee might be able to use.

The first report, titled "Protecting America's Schools," was from 2019 and contained information gathered by the U.S Secret Service National Threat Assessment Center, which studied 41 incidents of targeted school violence that occurred at K-12 schools from 2008 to 2017.

"The key thing from this article is that it denotes there is no clear profile for a school attacker," May said.

The study states that attackers usually had multiple motives, with the most common involving a grievance with classmates. It also states that nearly every attacker experienced negative home life factors and most were victims of bullying and had a history of school disciplinary actions or had prior contact with law enforcement.

"To me it points to the whole bystander issue of bullying," May said. "Nobody spoke up or reported it. And they even communicated their intent to others but others didn't always come forward."

The second report, titled "Averting Targeted School Violence," was from 2021 and focused on plots against schools that were thwarted. The study, done by the U.S. Secret Service, involved an analysis of 67 averted school attack plots that demonstrated that there are almost always intervention points available before a student's behavior escalates.

"Their overall statement is that coming forward can save lives," May said.

These conversations are part of the reason why Gov. Asa Hutchinson reinstated the Arkansas School Safety Commission last week in the aftermath of mass shootings that occurred across the nation, including the May 24 school shooting that left 19 children and two adults dead in Uvalde, Texas.

"The recent violence in Texas was a stark reminder that the work of securing our schools is never done," the Republican governor said in a news release issued Friday. "That is why I am calling the Arkansas School Safety Commission back into service."

Members of the commission that he initially created in March 2018 submitted 30 recommendations in their original 124-page report. School districts across the state have since implemented many of the recommendations, according to the governor's office.

"Being here, I have mixed feelings about it," May said at Tuesday's meeting. "I am saddened and angry at the same time. When we have a moment of silence to support the victims, their families and the entire Uvalde community we must ensure that is not all that we do. We have to ensure that we do everything that we can to make sure that every single child and staff member in Arkansas schools are safe, and that will be our mission moving forward."

For some Arkansans, the shooting in Texas brought back painful memories of a shooting that occurred at Westside Middle School in Northeast Arkansas in 1998 that left four students and a teacher dead and 10 others wounded when two students opened fire on the campus.

"We have many administrators, teachers and kids that are now teachers who were there years ago. Uvalde resonated differently here," Linda Graham, school psychologist for the Nettleton School District, said. "I spent a lot of time hugging people and talking things out."

"That information about Texas hit hard for all of us. For some reason this one hit me differently than most," she said. "This was definitely the right call at the right time."

Under the governor's executive order issued Friday, the commission will review its final report published in November 2018 and provide an update on the status of school safety across Arkansas.

The commission also will update an analysis of the safety of K-12 schools throughout the state, taking into consideration the physical and mental health of students, and determine which findings and recommendations from the previous report have not been remediated or achieved, according to the governor's executive order.

The commission is currently scheduled to meet every Tuesday until the terms of the order are satisfied. 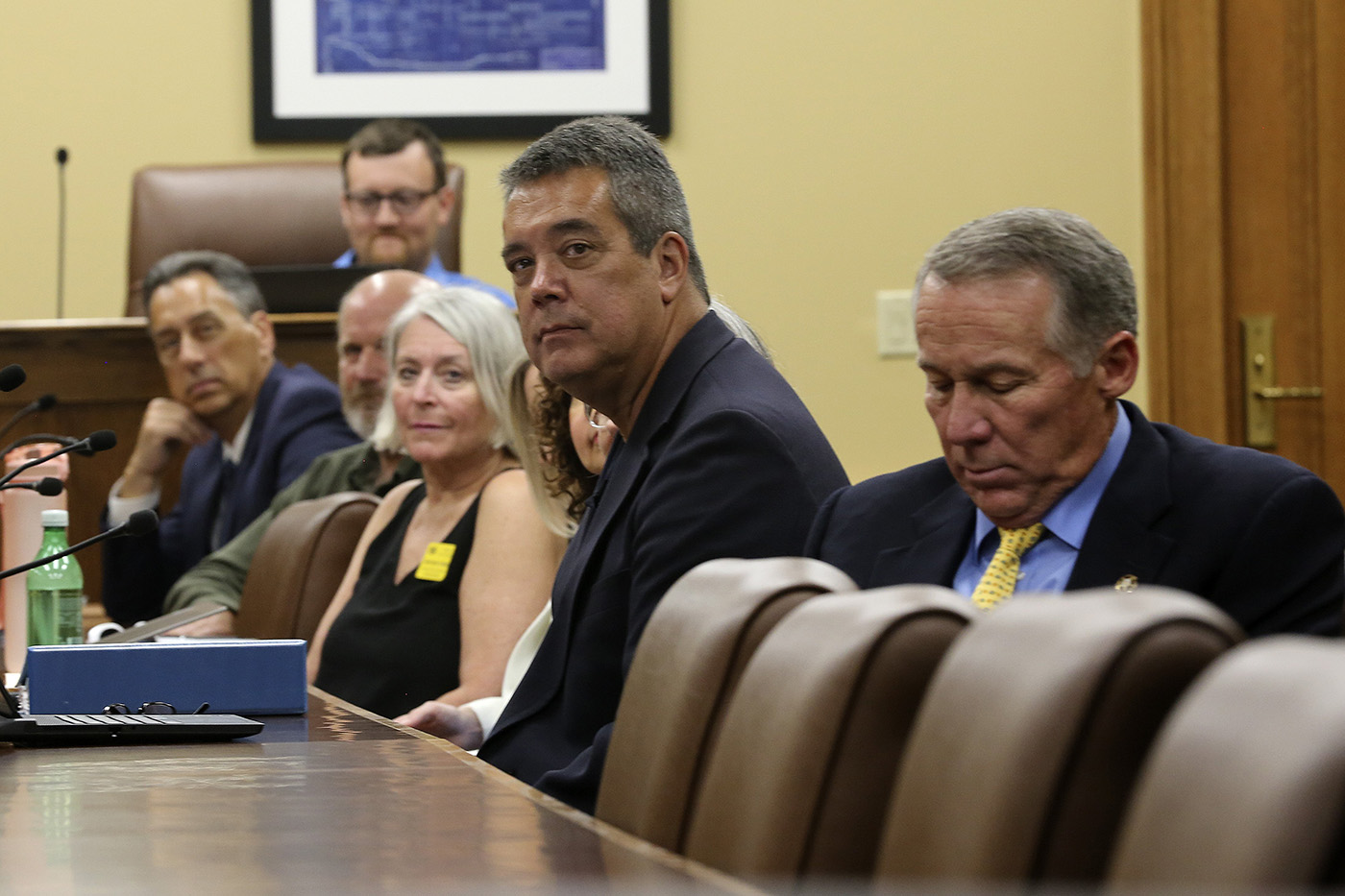