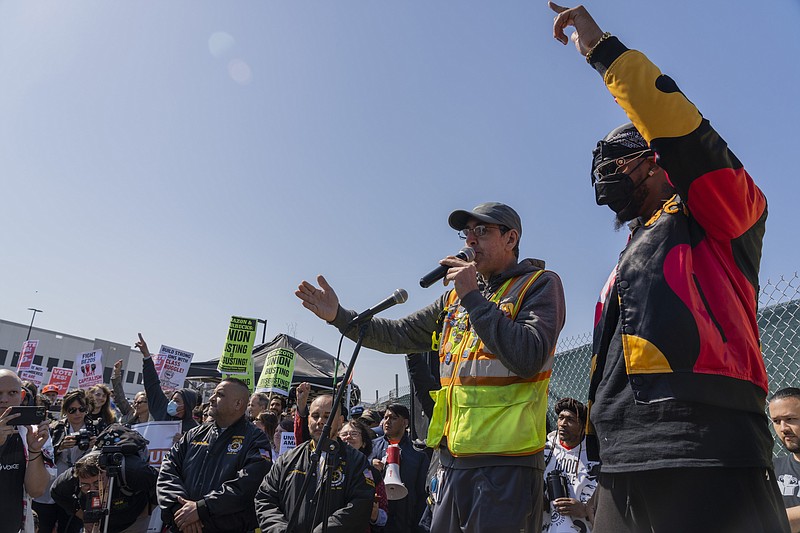 Matt Litrell, a 22-year-old Amazon employee, was distributing union flyers outside the warehouse where he works this month when the police showed up.

An Amazon manager had called the sheriff's office in Campbellsville, Ky., that afternoon to report that protesters trying to start a union were trespassing on company property. While the officers eventually determined that Litrell wasn't on Amazon's property and left, Litrell plans to add the incident to the illegal-intimidation charge he filed with the National Labor Relations Board in May.

"We were completely within our rights to be there," Litrell told The Washington Post. But he said that didn't stop a low-level manager from confronting him later to ask, "'How's the revolution going?'"

Employees at Amazon facilities around the country whose union hopes were buoyed by the labor victory at a warehouse in the Staten Island borough of New York City in April say in labor board filings and interviews that the company has been calling police, firing workers and generally cracking down on labor organizing since that historic win. Amazon has been accused of illegally firing workers in Chicago, New York and Ohio, calling the police on workers in Kentucky and New York, and retaliating against workers in New York and Pennsylvania, in what workers say is an escalation of long-running union-busting activities by the company.

It's a sign that, even as lawmakers demand Amazon drop its objections to the union win in Staten Island, which it is scheduled to present in a hearing Monday, the nation's second-largest private employer will continue to put up fierce opposition to any wave of union momentum.

"They're scared," said Seth Goldstein, an attorney representing the Amazon Labor Union (ALU), which pulled off the victory in Staten Island. "They want to stop the organizing, and this is how they want to do it."

"Like every company, we have basic expectations of employees at all levels of the organization when it comes to attendance and performance, safety, and personal conduct," Amazon spokesperson Kelly Nantel said in a statement. "Whether an employee supports a certain cause or group doesn't factor into the difficult decision of whether or not to let someone go. The allegations mentioned in this story are without merit, and we look forward to showing that through the appropriate process."

Even if the attempt by Amazon to get the Staten Island election results thrown out fails, it will probably be months or years before workers succeed in bargaining for a contract. Meanwhile, an attempt to unionize a warehouse in Bessemer, Ala., is ongoing, as both sides contest the results of an undecided union election that took place there in March. A second Staten Island warehouse voted against unionizing last month.

"While Amazon likes to boast about its competitive starting pay, its generous benefits, and its support for select progressive policy items, this 'pro-worker' sentiment fades away the moment its own workers state they want to exercise their legal right to collectively bargain," Sens. Bernie Sanders, I-Vt., and Kirsten Gillibrand, D-N.Y., wrote in a letter to Amazon Chief Executive Officer Andy Jassy on Friday.

Nonetheless, the original victory in Staten Island -- and a revote in Alabama -- triggered outreach from hundreds of new workers interested in unionizing some of the company's warehouses, according to the unions.

In December, in response to allegations of union-busting across the country, Amazon made a deal with the labor board in which it agreed to make union organizing at its facilities easier.

But workers say Amazon has continued to push back against their efforts -- helping prompt a wider array of filings with the NLRB.

To deal with all the requests for legal help from Amazon employees, the ALU's Goldstein said, the upstart union has accepted help from 21 Harvard and Yale law students who volunteered their services.

Other unions have also stepped up to provide legal support and financial resources. In Pennsylvania, an Amazon employee who claims to have been illegally retaliated against is being represented by the American Postal Workers Union, which has expressed interest in expanding its membership to include more employees of private companies.

A union lawyer declined to comment on the case. The Postal Workers Union didn't respond to questions about whether it is trying to organize Amazon employees, though it has publicly stated its intent to support them. Amazon's Nantel said the charge is without merit.

In the two months since the ALU's victory, more than half a dozen Amazon workers claim to have been fired in what they call an effort to intimidate others who might be interested in unionizing. Four Amazon workers in New York City's Queens borough said in an April filing that the company discharged them for "protesting terms and conditions of employment."

A worker in Cleveland, Joey Desatnik, said in a May 16 unfair-labor-practice charge that Amazon had terminated him to "discourage union activities and support among his fellow employees." And in Chicago in May, Amazon fired warehouse worker Rakyle Johnson, a member of Amazonians United who alleged in a labor board filing earlier this month that Amazon fired him because he "joined or supported a labor organization."

Amazon's Nantel disputed those allegations, saying Desatnik was terminated for aggressively avoiding a security screening and that Johnson "was terminated for a serious safety violation that involved jamming an object in a conveyor belt to stop production." Johnson and Desatnik did not respond to requests for comment.

But Goldstein, the ALU attorney, said, "I think there's been more of a crackdown."

One alleged victim of that crackdown is Pat Cioffi, an ALU organizer who said he was friendly with management at JFK8, the Staten Island warehouse, before he became a vocal union supporter following the arrest of union leader Chris Smalls. Amazon fired Cioffi on June 9; in an email, Nantel said Cioffi was terminated because an internal investigation found that he verbally and physically assaulted a female manager. But Cioffi denies it and told The Washington Post his termination was retaliation for union activity.

"I was very pro-union, and very vocal for the union and getting people to join our union, and they didn't like that," said Cioffi, who on Friday demanded to be reinstated to his job in an unfair-labor-practice charge with the NLRB.