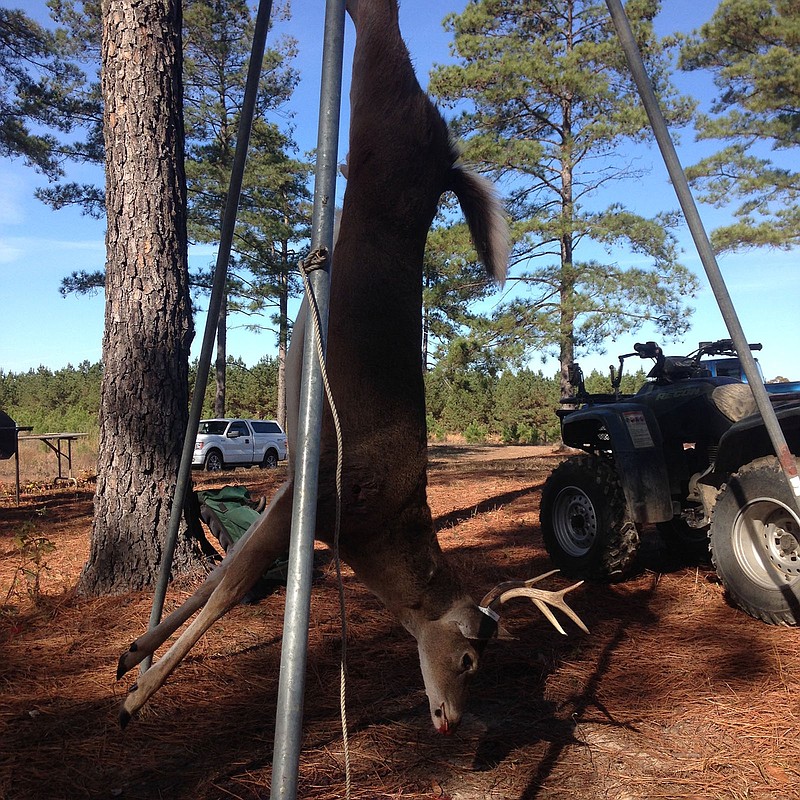 A hunting club is an economical way to access good hunting opportunities throughout Arkansas. Clubs are like cooperatives. Reputable clubs are incorporated businesses in which members share the cost of a leased amount of acreage. They have bylaws which include policies on personal conduct, whether family members may hunt, and also if and when guests can hunt.

Some clubs, depending on the quality of their habitat, also have management objectives. They often have antler-point restrictions that are more demanding than Arkansas Game and Fish zone regulations. Some might have lower doe limits than AGFC zone regulations.

With a little research, a hunter can find a club whose goals and expectations align with their own, but that often requires some legwork and research.

While deer hunting clubs exist everywhere in Arkansas, they are most common in the Gulf Coastal Plain of South Arkansas. Fortunately, this is Deer Management Zone 12, Arkansas's so-called "Deer Factory." The counties in Zone 12 consistently contribute the most deer to Arkansas's annual deer harvest, and while this area is not known for giant racks, it offers ample opportunity to encounter mature bucks. Even if it doesn't have the same quality of antlers as are common in the Mississippi River Delta or in portions of the Ozarks, a mature buck is the most challenging and most rewarding to hunt.

They typical hunting club in the Gulf Coastal Plain is a large tract leased from a timber company or a large property management company. It is part of a working forest, which means that timber harvest is the landowner's primary objective. Deer hunting occurs around timber management activities, which means that your prime hunting location last fall can be reduced to a moonscape this summer.

Your secluded stand in the shade of mature pines will be in the middle of a cutover and in view of half a dozen other stands. Members of these clubs accept that reality and understand that good hunting will return as the cutover regenerates with a new crop of row-planted pines.

Membership in some clubs are by invitation only. One such club is Old Belfast Hunting Club, of which I have been a member since 2009. The hunting ranges mediocre to outstanding. Even in the mediocre years, deer are plentiful. The quality of hunting depends on the quality and condition of the habitat, the timing of the season and merely being there at the right time.

The main reason I'm in this club is because I enjoy its other members. Some of us are like family. We all get along very well, and we all generally value hunting the same way. If such a club invites you to join, it's because the club has already vetted you and determined that you will be a good fit.

If you have to look for a club to join, you should be prepared to ask a lot of questions. Unfortunately, you also have to be prepared to be disappointed occasionally.

For example, I joined two clubs in the early 2000s where I did not fit. One was 10 minutes from my home, and it was very inexpensive. It was inexpensive because it did not cap the number of memberships. It had way too many members for its relatively small acreage. There was no limit on how many hunting stands a member could have, and there was no minimum distance requirement to separate stands. People were all over each other, and it was unsafe.

The second club was near Warren. One family dominated the club, and other members existed only to underwrite their expenses. Before erecting or hanging a stand, a member had to report the location to the club president for permission. If a newcomer found a good place for a stand, he was informed that grandma or grandpa had already claimed that spot. It quickly became apparent that new members were merely a scouting service for the established family members.

Before joining, a prospective member should know how much acreage the club has and the locations of its boundaries. It's important to know how many stands a membership is allowed to have. At Old Belfast, for example, a single membership is allowed to have only three stands. A single membership includes spouses and children, but they are limited to hunting from only three stands. Meemaw and papaw and all the kids and grandkids don't get three additional stands each. If a club does not impose a similar limitation, you can assume that you will probably not get a good place to hunt.

How accommodating is a club to new members? At Old Belfast, anyone that sponsors a new member is required to find the new member at least one good place to hunt, even if it means giving up one of your own stands.

Does the club allow running deer with dogs? If your preferred style of hunting is not compatible with deer dogs, you won't be a good fit for a dog-running club.

A club's policy about alcohol consumption might be important to you. If it's a partying club, it might not be a suitable place to bring your family.

What is the club's policy on cutting shooting lanes. Because many clubs are working forests, a club might be financially responsible for any trees a member cuts. Repetitive property destruction is grounds for a landowner to revoke a lease, so clubs are often very strict in this area.

If you do your homework and perform your due diligence, you stand a much greater chance of finding a club that's more like a home.