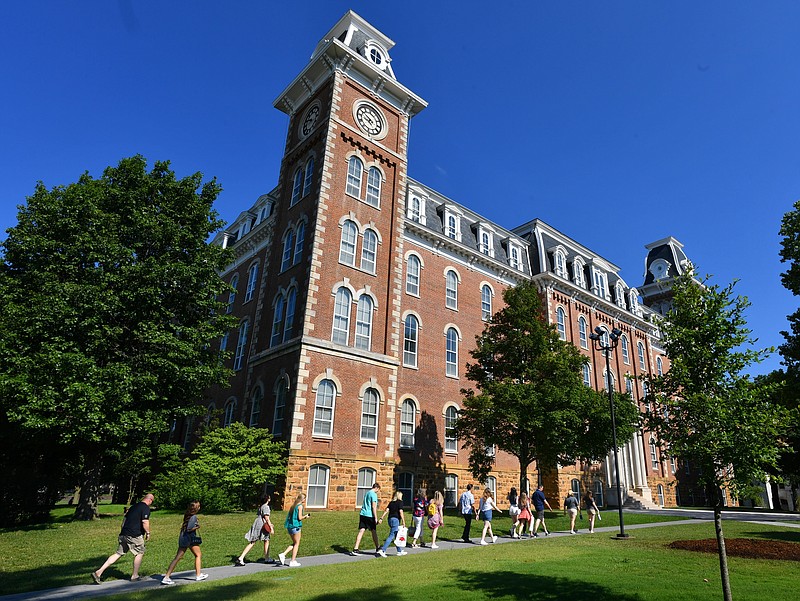 Prospective students and their families walk Thursday, June 30, 2022, to the front doors of Old Main on the University of Arkansas campus while taking part in a tour of campus in Fayetteville. Tour guides are busy this time of year giving tours to high school students as they decide their college destinations. (NWA Democrat-Gazette/Andy Shupe)

More than half of the state's universities would lose funding under the state's productivity model, while a recommended $6.4 million in productivity funds for the University of Arkansas, Fayetteville is 11 times larger than what any other school would receive.

The state Higher Education Coordinating Board on Friday approved recommendations for annual funding distributions under a model that's been championed as a way to prioritize student success and program completion, including by Gov. Asa Hutchinson.

An analysis by the Democrat-Gazette earlier this year found that UA-Fayetteville has gained a cumulative total of $36.9 million in added productivity-based funding dollars compared with an initial baseline of fiscal 2018 funding, with no other state college or university seeing cumulative gains greater than $10.8 million.

The recommendations approved Friday for the 2023-2024 fiscal year -- if given legislative approval -- would further that gap.

Justin Ortagus, a University of Florida researcher who studies state higher education funding policies, called the Arkansas productivity distribution recommended for 2023-2024 "more unequal than usual," though he added that such funding models often benefit what are known as state "flagship" universities like UA-Fayetteville.

"If the goal is to graduate more students, it's understandable why policymakers would direct resources to those institutions deemed most likely to graduate students. Unfortunately, productivity-based funding leads to unintended consequences, such as allocating fewer resources to already under-resourced institutions," Ortagus said in an email.

The governor-appointed coordinating board approved recommendations based on year-over-year changes in what's known as a school's productivity index.

Mark Rushing, a UA-Fayetteville spokesman, asked about whether the model led to inequitable funding, said the $6.4 million recommendation was not a year-over-year increase in funding for UA.

The 2023-2024 "total change in funding" recommendation approved Friday is in reference to the 2023-2024 "base" funding level which is less than what UA actually received in fiscal year 2022-2023 because that year included one-time incentive funding.

Rushing in an email said the state's formula doesn't pit schools against each other, "but rather the formula measures each institution against itself in terms of how that institution improves each year."

State colleges and universities can gain or lose funding each year under the system. Funding losses get reallocated to schools with an improved productivity index, which this year especially benefited UA-Fayetteville, as the state's largest university showed greater index gains than any other university.

"Also, since the creation in 2017 of the productivity funding formula, the U of A has greatly increased its student retention and graduation rates while reducing the time to degree competition," Rushing said.

Ortagus said "productivity-based funding allows wealthy institutions to get wealthier while institutions with minimal resources are allocated even less."

Losses for universities would range in amount from $118,253 for Henderson State University to $757,102 for Arkansas Tech University.

Sam Strasner, a spokesman for Arkansas Tech, in an email described the pandemic's effects on enrollment as a factor in the school's productivity index decline.

"Institutions such as Arkansas Tech serve a significant number of low-income and first-generation college students, and those students' ability to enroll at a university and persist to degree attainment has been disproportionately negatively affected by the pandemic and the associated economic effects," Strasner said in an email.

Maria Markham, director of the state Division of Higher Education, on Friday told members of the governor-appointed Higher Education Coordinating Board that by October there will be a report on the state's productivity funding.

Alisha Lewis, a spokeswoman for the state agency, said a group of higher education professionals annually evaluates the productivity model, adding that any recommendations for change would be presented to the board in October.

Strasner, with Arkansas Tech, referred to conversations about the state's productivity model.

"Like most public policy, the productivity model can be adjusted over time to meet the evolving higher education needs of the people of Arkansas," Strasner said. "As stakeholders and policymakers evaluate those factors, Arkansas Tech looks forward in participating in conversations that support the best interests of its students, ensure the continued financial health of the institution and are aligned with the overall health of the higher education ecosystem in Arkansas."

Riley also said state leaders earlier this year adjusted funding per full-time equivalent student, raising it for the Fort Smith campus and two other universities. She praised Hutchinson "for recognizing an inequity and taking action to begin incrementally correcting this issue."

"As it is, the loss of $438,000 is a major challenge, and equates to the salaries and benefits of roughly seven [full-time equivalent] employees (assuming average salary and benefits of $65,000/year). Conversely, we would have to increase enrollment by 55 students attending full time who receive no institutional scholarships to fully balance the financial loss," Riley said.

Riley said UAFS lost productivity points "in the areas of retention, persistence, and timely completion of credentials and degrees."

"Though we look forward to a rebound in enrollment as we overcome pandemic losses, leaders at UAFS both anticipated and planned for the decline we saw over the past two academic years. Understanding the grim enrollment forecasts for regional public institutions across the nation, it is not surprising to see this reflected in productivity funding losses for institutions our size," Riley said.

"Overall, SAU has benefited from the productivity funding formula," Shelly Whaley, a spokeswoman for the Magnolia campus, said in an email, adding that since the first year of the current model the university has outperformed other schools in its productivity index.

Whaley, explaining the recent index decline, said students majoring in STEM fields -- science, technology, engineering and mathematics -- who had been counted in a "baseline" formula calculation have since left the university. The state's productivity formula gives added weight to STEM degrees.

"These students graduating was the reason for our decline," Whaley said.

George Cotton Sr., vice chancellor for institutional advancement at UAPB, in a statement referred to efforts made at the historically Black university to support students during the covid-19 pandemic.

"Overall, covid negatively impacted African American communities far worse than other ethnic groups. This pandemic hit our students hard -- there's no way around that fact," Cotton said. He said the school in the previous year's recommendations had index gains and that he hoped legislators would keep funding steady.

Apart from UA-Fayetteville's $6.4 million, the next largest recommendation for productivity funding would go to Arkansas State University. The governor-appointed board approved a recommended $544,585 for the Jonesboro campus, which by enrollment is the second-largest in the state behind UA-Fayetteville.

"A-State has focused on and excelled in multiple areas of the formula related to student success and efficiency," Jeff Hankins, a spokesman for the Arkansas State University System, said in an email.