Pallette signs with White Sox for over slot value 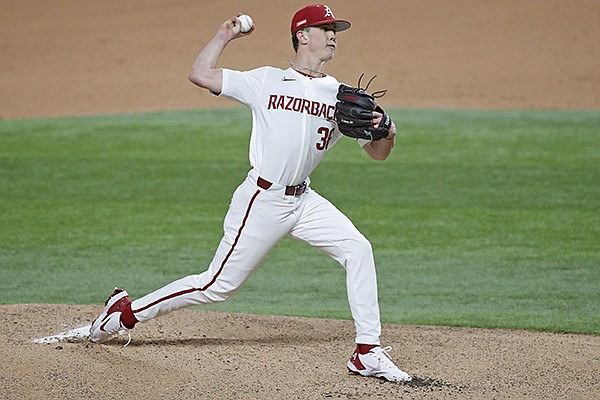 Arkansas pitcher Peyton Pallette throws during a game against Texas on Sunday, Feb. 21, 2021, in Arlington, Texas.

Pallette will receive a $1.5 million signing bonus from the team, MLB.com senior writer Jim Callis reported. That is more than the $1.16 million slot value for Pallette, who was drafted 62nd overall in the second round of the MLB Draft last week.

Pallette, a Benton native, is recovering from Tommy John surgery, which he underwent early this year. Prior to the surgery he was projected to be a high first-round pick by Baseball America.

Eight of Arkansas' nine draft picks have signed professional contracts since they were drafted last week. The only player yet to sign is third baseman Cayden Wallace, who was drafted 49th overall by the Kansas City Royals in the second round.

The deadline for drafted players to sign professionally is Aug. 1.