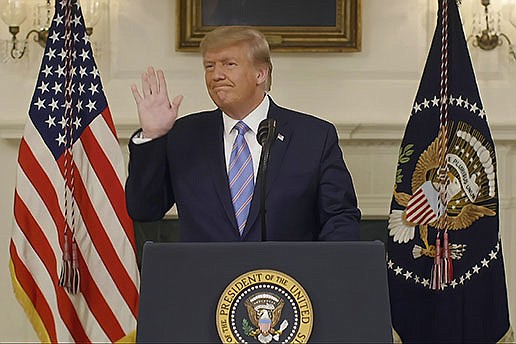 Months deep into their investigation of the Jan. 6 attack on the U.S. Capitol, House Select Committee members do not mince words.

They have learned a lot, will learn more and want to see those responsible held to account for this stain on American history.

Criminal charges, if there are to be more against those who plotted or participated in the failed coup, must come from the Justice Department or elsewhere in the nation's judiciary.

That's why what the committee discovers and how members articulate their findings to the public is so significant.

As the inquiry has gone on, the members' words have gotten all the more direct, their accusations pointed straight at former President Donald Trump as the driving force behind what happened on Jan. 6.

"Over the last month and a half, the Select Committee has told the story of a president who did everything in his power to overturn an election. He lied. He bullied. He betrayed his oath. He tried to destroy our democratic institutions."

Thompson's words, delivered with the Mississippi Democrat's soft Southern accent, might have been lost in anticipation of the hearing testimony that was to come.

Nevertheless, his straightforward comments set the stage for new evidence of Trump's performance -- or lack of it -- on Jan. 6.

This was the committee's first public hearing focused specifically on Trump's behavior.

It was all about that critical 187 minutes between Trump's speech to assembled supporters at the Ellipse and his reluctant call for the mob that attacked the Capitol to go home.

As committee members have done in past hearings, they presented recorded and live testimony from Republicans who had been with the president that day.

These were people on his White House staff, family members and others who swore under oath that they witnessed the president do nothing to stop the ongoing, bloody insurrection for more than three hours.

The testimony was damning, confirming what Chairman Thompson had said beforehand.

Trump was the one person who could call off the mob that was savagely beating law enforcement officers and targeting his own vice president and U.S. lawmakers gathered in the Capitol.

Yet, Trump "could not be moved," Thompson said.

Trump did not summon the military or anyone else to stop the mayhem. The commander-in-chief instead ignored pleas from his own advisers, from lawmakers in the Capitol and even from Trump's favored Fox News' hosts.

The president of the United States sat in his private White House dining room and watched the brutal attack he had incited unfold on television.

By delaying the Electoral College vote count, the Capitol rioters were doing precisely what Trump wanted. It was his last-ditch attempt to cling to power.

It failed, but at great cost to this nation as the Jan. 6 investigation is confirming.

Last week's hearing made clear that the president had, through his inaction, betrayed his oath of office and ignored his duty to protect the Capitol and all who worked there.

Trump had faced "a stark and unmistakable choice between right and wrong," said Liz Cheney, the committee's vice chair, as the Wyoming Republican summed up what had happened in her closing remarks.

"There was no ambiguity. No nuance. Donald Trump made a purposeful choice to violate his oath of office, to ignore the ongoing violence against law enforcement, to threaten our constitutional order. There is no way to excuse that behavior. It was indefensible."

Then she bluntly asked whether a president willing to make the choices Trump made during the violence of Jan. 6 can ever be trusted with any position of authority again.

Cheney has answered the question for herself. She has likely sacrificed her re-election as Wyoming's lone House member to take a strong stand to defend the Constitution and expose Trump.

Her question was actually directed to Americans everywhere, particularly those who vote.

The answer should be an emphatic "no," although Trump threatens to run again for president.

Meanwhile, the committee's work continues as members and staff take new testimony, seeking to record what happened on Jan. 6 as completely as possible.

More hearings and a written report, including recommendations from the panel to guard against a repeat of that violent day, are expected in September.

Full video and transcripts of the Jan. 6 Select Committee's hearings are readily available online, including at NPR.org.