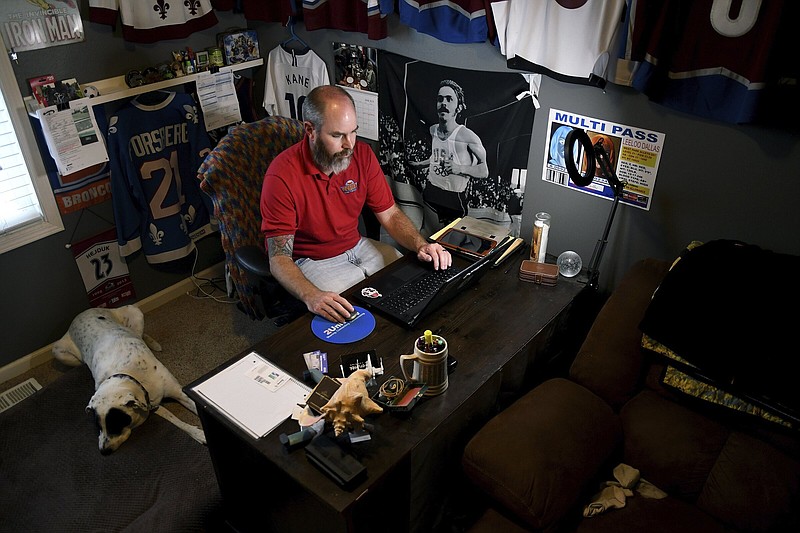 Kyle Tomcak works in his home office in Aurora, Colo., on Monday, July 18, 2022. Tomcak was in the market for a home priced around $450,000 for his in-laws and he and his wife bid on every house they toured, regardless of whether they fell in love with the home. He said his search became increasingly dispiriting as he not only lost out to investors fronting cash offers $100,000 over asking price but as mortgage rates started to balloon. He has since pulled out of the housing search. (AP Photo/Thomas Peipert)

NEW YORK -- Kyle Tomcak was looking for a home for his in-laws in the suburbs around Denver, something priced close to $450,000.

Tomcak became dispirited as he lost out to investors fronting cash offers $100,000 over the asking price. Then mortgage rates ballooned, putting his price range out of reach.

"All of a sudden, your buying power is less ... even though your payments are the same," he said.

Tomcak, 39 and a project manager for a commercial painting company from Aurora, Colo., had hoped to lock in a monthly mortgage payment of $2,350. His mortgage consultant recommended dropping the maximum price he'd pay for a home, first to $300,000 then to $200,000.

Tomcak has abandoned his search for now.

The rate on a 30-year mortgage averaged around 5.54% last week, according to mortgage buyer Freddie Mac; a year ago it was close to 2.78%. The increase in rates is leaving buyers with some unwelcome options: pay hundreds of dollars more for a mortgage, buy a smaller home or choose to live in a less desirable neighborhood, or drop out of the market, at least until rates come down.

All signals point toward the Fed continuing to raise interest rates, promising little relief for potential buyers at least for the rest of the year.

Data provided to The Associated Press by the real estate data company Redfin shows how much home a buyer could get with a $2,000 a month mortgage payment. In Providence, R.I., for example an average buyer a year ago could have purchased a roughly 4,900-square-foot home for that size mortgage payment. Now that amount only gets a buyer a 2,200 square foot home.

In Seattle, a hotter housing market, a $2,000-a-month payment this time last year would have gotten a buyer a modest 1,300-square-foot home. That sort of payment would get them only a 950-square-foot apartment now.

"Simply put, people cannot afford the same home as they could have a year ago," said Daryl Fairweather, an economist with Redfin.

Besides pushing would-be homeowners to reconsider their home search, rising rates are also forcing a growing number of buyers who struck a deal on a house to back out. About 60,000 home-purchase deals fell through in June, representing nearly 15% of all homes that went under contract last month, according to Redfin. That's up from 12.7% in May and 11.2% a year ago.

For more than a decade, potential homebuyers were willing to put up with rising home prices because the cost of a mortgage was at historical lows. The average mortgage rate on a 30-year fixed-rate mortgage mostly stayed below 4.5% for most of the last decade, according to data from the Federal Reserve Bank of St. Louis.

The financial data firm Black Knight estimates that the rise in mortgage rates has increased a typical borrower's monthly payment by 44% since the beginning of the year. Since the start of the pandemic, the average mortgage payment has doubled to more than $2,100.

Most of the pain is being felt at the bottom of the market: the first-time homebuyer, who often has the least amount of money for a down payment and is trying to make the monthly payment work for their budget. Sales of homes priced below $250,000 fell by more than 30% in June.

For those who can afford to buy a home even with higher mortgage rates, the housing market slowdown has a silver lining -- more options. As homes get fewer offers, they tend to linger on the market longer. The number of homes for sale, which has been rising from ultra-low levels since the spring, increased 18.7% from a year earlier, according to Realtor.com.

The market has changed dramatically for sellers as well.

Raymond Martin and his wife listed their home in Austin, Texas, for sale for $1.1 million in early May. They figured selling the four-bedroom, three-bath house would be "a walk in the park."

The couple had reason to be optimistic. As recently as this spring, it wasn't unusual for sellers to receive multiple competing offers within hours of listing their home, or for some buyers to agree to pay well above asking price while giving up their right to a home inspection -- all to beat out rival bidders. It was very much a sellers' market.

Instead, the Martins have yet to receive a single offer and have lowered their asking price to $899,000. Raymond Martin, 51, noted that shortly before listing his Austin home, a neighbor sold their similar-sized home for $100,000 over the $1 million asking price.

The couple are living in a new home in Florida while patiently trying to sell the Austin property. "Clearly, the market's kind of stalled," he said.

Historically, late spring to early summer is peak home buying season in the U.S., but there are multiple signs that buyers have become discouraged.

Joe Luca, a realtor and past president of the Rhode Island Association of Realtors, said buyers are having to refine their search, settling for smaller homes, or choosing a neighborhood further from a city center.

"People may be looking to buy a house in a really nice town in the best part of that town. Rates go up so they can't afford that, so they need to recalibrate what they are going to buy," he said.

Information for this article was contributed by Jesse Bedayn of the Associated Press. 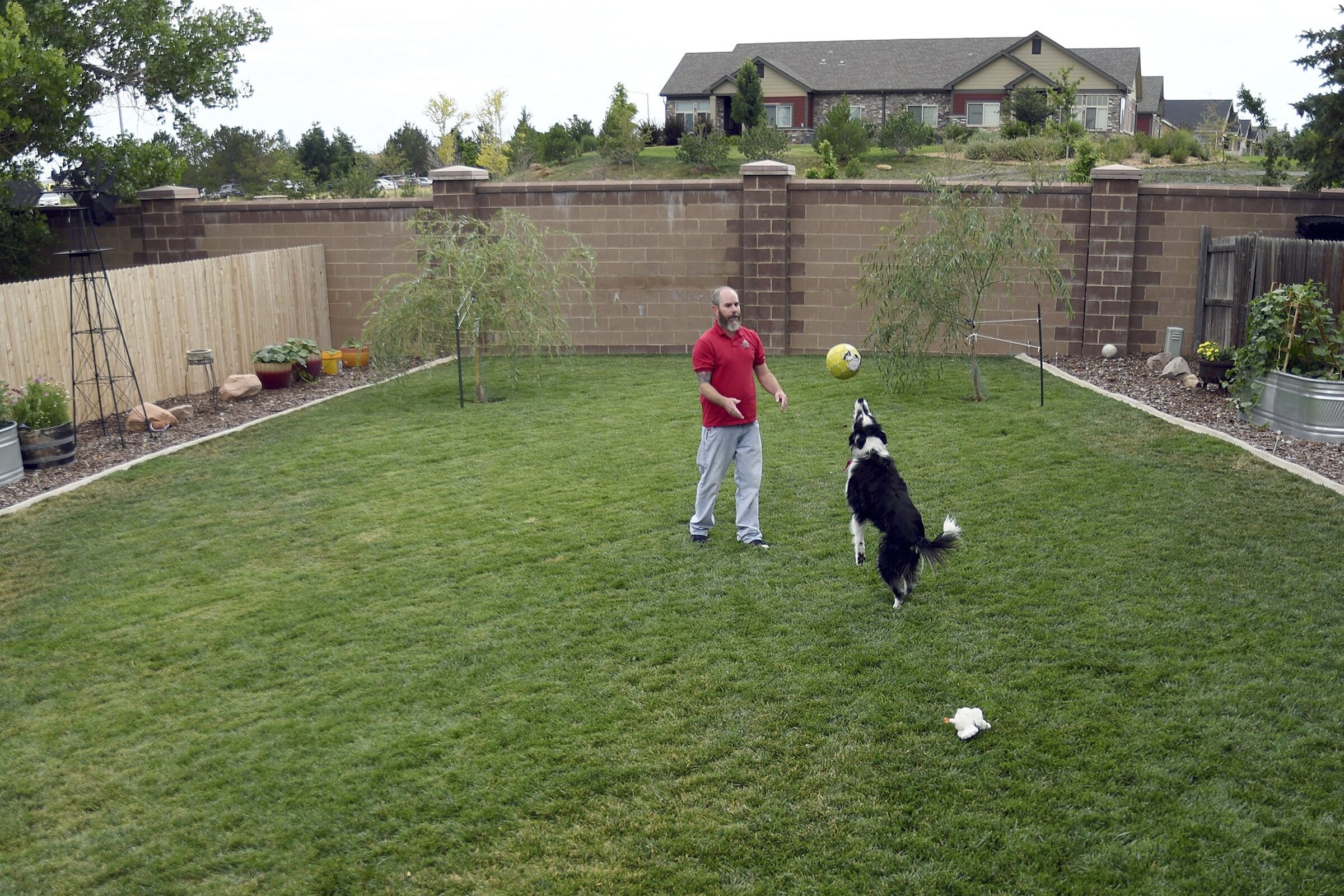 Kyle Tomcak plays with one of his dogs in the backyard of his house in Aurora, Colo., on Monday, July 18, 2022. Tomcak was in the market for a home priced around $450,000 for his in-laws and he and his wife bid on every house they toured, regardless of whether they fell in love with the home. He said his search became increasingly dispiriting as he not only lost out to investors fronting cash offers $100,000 over asking price but as mortgage rates started to balloon. He has since pulled out of the housing search. (AP Photo/Thomas Peipert)