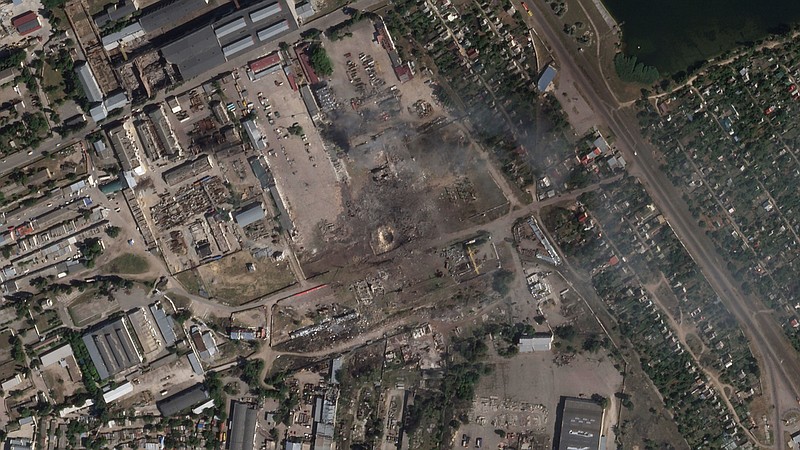 KYIV, Ukraine -- The Ukrainian military on Tuesday reported destroying a Russian ammunition depot in southern Ukraine, resulting in an explosion captured on social media, while rescuers said the death toll from a weekend Russian strike in the country's east grew to 45.

An overnight rocket strike targeted the depot in Russian-held Nova Kakhovka, the Ukrainian military's southern command said. Nova Kakhovka is about 35 miles east of Kherson, which is also occupied by Russian forces.

The precision of the strike suggested Ukrainian forces used U.S.-supplied multiple-launch High Mobility Artillery Rocket Systems. Ukraine indicated in recent days that it might launch a counteroffensive to reclaim territory in the south as Russia bombards the eastern Donbas region.

Russia's Tass news agency offered a different account of the blast in Nova Kakhovka, saying a mineral fertilizer storage facility exploded and a market, hospital and houses were damaged. Some of the ingredients in fertilizer can be used for ammunition.

A satellite photo taken Tuesday and analyzed by The Associated Press showed significant damage. A huge crater gaped precisely where a large warehouse-like structure once stood.

Ukraine now has eight of the rocket systems, a truck-mounted missile launcher with high accuracy, and Washington has promised to send four more.

Explosions were reported late Tuesday in Luhansk, a city in the Donbas that has been under the control of Russian-backed separatists since 2014.

A spokesman for the separatist forces, Andrei Marochko, said the Ukrainian army had dealt a "massive blow" to the air defense system in Luhansk, the Russian news agency Interfax reported. He said there was no word yet on any casualties.

There was no immediate information from the Ukrainian government or military.

"The occupiers have already felt what modern artillery is like, and their rear will not be safe anywhere on our land that they have occupied," President Volodymyr Zelenskyy said in his nightly video address. "They have felt that the operations of our intelligence officers for defending their homeland are of an order of magnitude greater than any of their special operations."

Elsewhere in Ukraine, Russian shelling over the past 24 hours killed at least 16 civilians and wounded 48 more, Ukraine's presidential office said in its Tuesday morning update. Cities and towns in five southeast regions came under Russian fire, the office said.

Nine civilians were killed and two more wounded in Donetsk province, which makes up half of the Donbas. Russian rocket attacks targeted the cities of Sloviansk and Toretsk, where a kindergarten was hit, the presidential office said.

The death toll from a Russian rocket attack that struck a Donetsk apartment building Saturday rose to 45, the emergency services agency said late Tuesday. It said workers found more bodies and also rescued nine people as they dug through the rubble in Chasiv Yar.

Many in the Donbas, a fertile industrial region in eastern Ukraine consisting of the Donetsk and Luhansk provinces, refuse -- or are unable -- to flee, despite scores of civilians being killed and wounded each week.

"The Russians continue their tactics of intimidating the peaceful population of the Kharkiv region," Kharkiv Gov. Oleh Syniehubov wrote Tuesday on Telegram.

In eastern Luhansk, "fighting continues near the villages" on the administrative border with neighboring Donetsk, Luhansk Gov. Serhiy Haidai told The Associated Press on Tuesday.

The British Defense Ministry's intelligence briefing said Russia had seized the town of Hryhorivka and continued to push toward the Donetsk province cities of Kramatorsk and Sloviansk.

However, Russia may be relying more heavily on private military contractors, like the Wagner Group, to avoid a general mobilization, the British ministry said.

Ukraine is getting an additional $1.7 billion in assistance from the U.S. government and the World Bank to pay the salaries of its beleaguered health care workers and provide other essential services.

The money coming Tuesday from the U.S. Agency for International Development, the Treasury Department and the World Bank is meant to alleviate the acute budget deficit caused by Russian President Vladimir Putin's "brutal war of aggression," the agency said in a statement.

While many medical staffers have left Ukraine, some hospitals have shut down and other hospitals have been bombed. The health workers who remain in Ukraine do their jobs under dire circumstances.

"$1.7 billion is not just yet another financial support; it is an investment that makes us a step closer to victory," Liashko said in a statement.

To date, USAID has given $4 billion in budgetary support to the Ukrainian government. These funds have been used for keeping gas and electricity flowing to hospitals and schools, getting humanitarian supplies to citizens and paying the salaries of civil servants and teachers, the organization said.

Treasury Secretary Janet Yellen said in a written statement the money would "reach those who need it most at the front lines of Putin's brutal and illegal war."

In other developments, the Kremlin said Putin would visit Iran next week. Kremlin spokesman Dmitry Peskov said Putin will travel to Tehran next Tuesday to attend a trilateral meeting with the leaders of Iran and Turkey, a format for Syria-related talks.

Russian and Turkish military representatives plan to meet in Istanbul on Wednesday to discuss the transport of Ukrainian grain through the Black Sea, a Russian Foreign Ministry official said.

Pyotr Ilyichyov, head of the ministry's department for international organizations, told Russian news agency Interfax that "representatives of Ukraine, as well as U.N. [officials] in the role of observers" are also expected to take part in the talks. Ilyichyov reiterated that Moscow was ready "to assist in ensuring the navigation of foreign commercial ships for the export of Ukrainian grain."

Germany's justice minister said investigating war crimes in Ukraine would likely take "many years" but he was confident it ultimately will be successful.

Justice Minister Marco Buschmann said there will "probably be hundreds of thousands, maybe even millions, of pieces of evidence that have to be sifted through, documented and evaluated."

Buschmann spoke Tuesday in Prague, where he and his European Union counterparts were meeting.

Information for this article was contributed by Maria Grazia Murru, Jon Gambrell, Isabel DeBre and Fatima Hussein of The Associated Press.