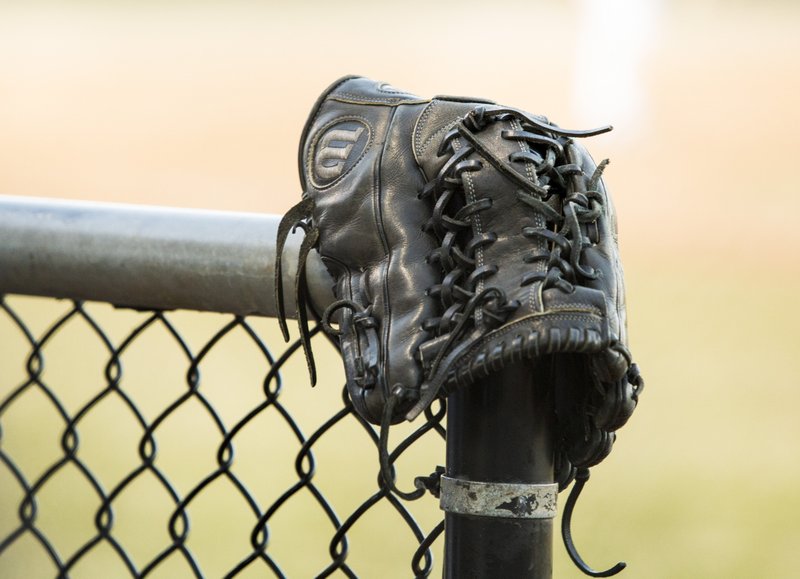 File photo -- A baseball glove rests on a fence.

It was smooth sailing Monday for Fort Smith until the final inning against Clinton. The situation turned dicey, but it found its way again to escape at Hunt's Park.

Fort Smith's pitching dominated most of the game in the 8-5 victory in an opening-round pool play game of the American Legion U17 state tournament.

After being behind 8-0 entering the seventh inning, Clinton got the bats going and put together a five-run inning and threatened for even more. Fort Smith then turned to Chunk Newton.

Newton allowed a run when Fort Smith couldn't turn a ground ball into an out on a fielder's choice. Newton bounced back after that to get a pop up and a ground out for the final outs to close the door for a save.

"He did a great job with things not going well for us," Fort Smith coach Mark Kincannon said. "He wasn't supposed to pitch today. But there at the last, I turned to him and asked, 'can you get me two outs?' He came in there and did his job well. He was injured during the high school season, so he is excited to make an impact."

Fort Smith, which consists of players all from Northside, started Landon Parnell on the mound. He picked up the win throwing 3 1/3 innings with 1 hit and 1 walk to go with his 8 strikeouts.

"I went out there and tried to throw strikes," Parnell said. "I wanted to pound the zone. The fastball was locating well and the breaking ball was curving a lot. I want to attack them and put the pressure on them."

Parnell set the tone early and often with strikeouts, as he struck out the initial five batters of the game including the side in the first inning. Fort Smith turned to Evan Ross after Parnell. Ross pitched 2 1/3 innings, allowing no base runners with a strikeout.

"Normally, Parnell would've finished the game, but in this format we needed to save him with his pitch count so he can come back later this week," Kincannon said. "Evan did a great job finding the strike zone. He had a three-pitch inning and I told Evan that his dad needed to buy him a big steak dinner for that. You don't see that very often."

Fort Smith jumped out to a 3-0 edge in the first inning with a lot of patience at the plate. They used five walks and an error to score their runs. Mason Kincannon, McLane Moody and Max Howerton all scored with RBIs coming from walks by Alex Martinez and Joe Roque.

"We know in this format that pitch count matters," Mark Kincannon said. "We talked about that coming into this. We saw a lot of pitches to get into their bullpen. Guys did a good job buying into that. I'm proud of our approach."

Fort Smith made it 4-0 after four innings. Mason Kincannon walked and later scored on a two-out error in the bottom of the fourth.

Martinez helped break open the game in the sixth inning on a 3-2 count. After he walked during the previous three plate appearances, he found something to hit and drove it for a two-run single during a four-run sixth inning for Fort Smith.

"I was seeing fastballs that at-bat and wanted to take advantage with runners on base," Martinez said. "We want to be patient then attack the baseball. That was the plan. I got my pitch to hit that appearance."

Mason Kincannon, Moody, Howerton and Andrew Taylor all scored during the sixth-inning rally. Martinez, Howerton and Roque provided the RBI. With the pitching woes in the final inning, it turned out to be the difference in the game.

"Those runs ended up mattering a lot," Mark Kincannon said. "Up until that last inning, we were pretty pleased. We didn't have a clean last inning and didn't field the ball well."

Clinton's Gavin Widner led the way with a two-RBI game. Matthew Bingham, Dillon Jones and Rylan Jones each had RBI as well during the come-from-behind attempt in the final inning.