Portion of U.S. 412 in Arkansas, Oklahoma designated a future interstate in infrastructure bill 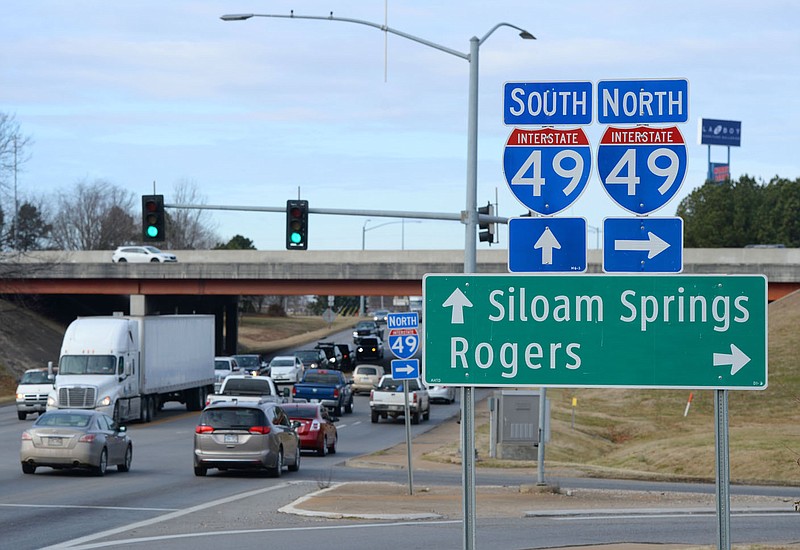 Traffic passes Friday, Jan. 28, 2022, along Sunset Avenue near the highway's exchange with Interstate 49 in Springdale. A 189-mile portion of U.S. 412 in Arkansas and Oklahoma has been officially designated a future Interstate on the National Highway System. Visit nwaonline.com/220130Daily/ for today's photo gallery. (NWA Democrat-Gazette/Andy Shupe)

FAYETTEVILLE -- A portion of U.S. 412 in Arkansas and Oklahoma has been officially designated a future interstate on the National Highway System.

Connecting Northwest Arkansas and north central Oklahoma with an interstate highway will encourage economic development along the corridor and expand opportunities for employment in the region, according to officials in both states. Others say it would improve supply chain connectivity and make travel between the areas safer.

The portion lies between Interstate 35 in Noble County, Okla., and Interstate 49 in Springdale. Congress made the designation in the new infrastructure bill. The future interstate designation authorizes the U.S. Department of Transportation to add segments of the corridor to the interstate system when certain criteria are met.

The Arkansas Department of Transportation is expected to discuss the study at a state Highway Commission meeting Wednesday.

In Arkansas, the route would use the new U.S. 412 Springdale Northern Bypass, when that road is complete. Phase one of the bypass -- also designated Arkansas 612 -- has been open for a while between Lowell and Arkansas 112. Work on phase two, from Arkansas 112 to U.S. 412 in Tontitown, is expected to kick off soon.

In Oklahoma, the route likely would follow the current U.S. 412 route through the Tulsa, Okla., metro area.

The purpose of the study is to determine the need for upgrading about 189 miles of U.S. 412 to interstate standards, according to the Oklahoma Department of Transportation.

The department also wants to determine access control ownership along the corridor, focusing on portions of U.S. 412 east of Tulsa that are not part of the turnpike system.

The study will also look at where additional right-of-way may be required and impact to adjacent properties may be.

Where the road cannot be upgraded, the study will identify the best alignment modifications.

The study will also look at what changes would be needed to make portions of the route eligible for interstate designation and any improvement the corridor would need to be interstate-compliant.

The study also will look at prioritizing utility improvements and all ongoing construction projects and projects under development in the corridor.

Phase one of the study should ultimately determine the design needs for the route, access control throughout the corridor and all proposed improvements required for interstate designation.

Phase two would determine what alignment changes would be required.

The idea of making the route part of the interstate system surfaced last year when the Indian Nations Council of Governments in Tulsa passed a resolution seeking support for the change from Oklahoma and Arkansas transportation and elected officials.

The Arkansas and Oklahoma transportation departments expressed support for the proposal in a letter to Inhofe.

"Northeast Oklahoma and Northwest Arkansas share historic, geographic, and economic interests and a future interstate designation will improve economic development opportunities for both regions while providing the state DOTs with sufficient time to fully upgrade the corridor to interstate standards," stated the letter signed by Tim Gatz, Oklahoma secretary of transportation, and Lori Tudor, director of the Arkansas Department of Transportation.

The highway would improve supply chain connectivity for major retail and industrial employers in the region, including Walmart in Northwest Arkansas and numerous energy and aerospace companies in Northeast Oklahoma, according to Indian Nations Council officials.

About 133 miles of U.S. 412 between I-49 and I-35 have been designed and constructed to interstate standards, according to the Indian Nations resolution. The resolution notes U.S. 412 directly serves the major inland ports of the Tulsa Port of Catoosa and Oakley's Port 33 on the McClellan-Kerr Arkansas River Navigation System. It also provides, or will provide, access to Tulsa International and Northwest Arkansas National airports.

U.S. 412 intersects with I-35 about 80 miles west of Tulsa. Interstate 35 runs from Laredo, Texas, north through San Antonio, Dallas, Oklahoma City and Wichita, Kan., to I-70 in Salina, Kan. It continues north all the way to Duluth, Minn.

Of the 60 largest metropolitan statistical areas in the nation, Tulsa is one of the few non-coastal cities that doesn't have more than one interstate highway passing through town. In Tulsa, it's I-44. Northwest Arkansas also has only one, I-49. 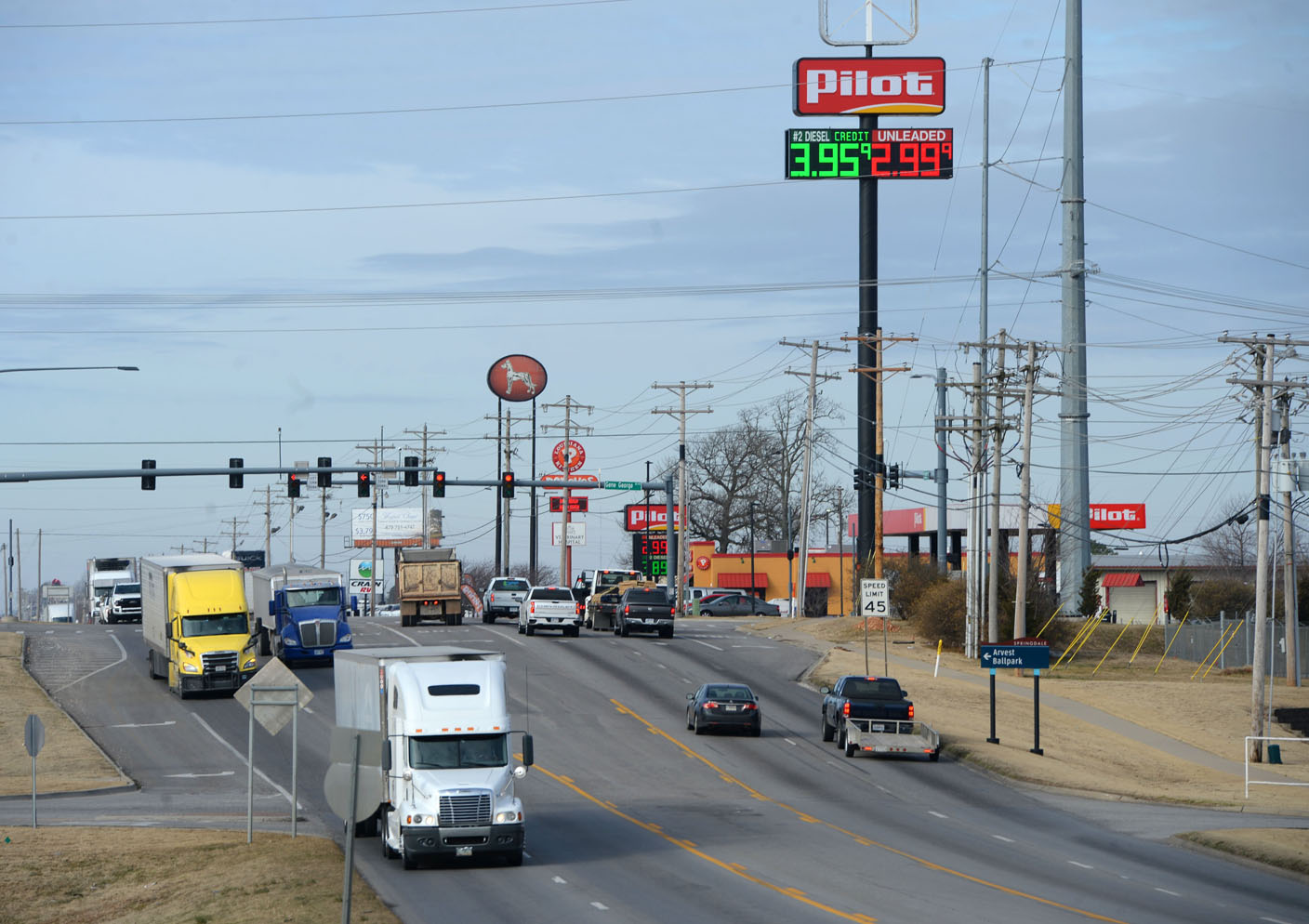 Traffic passes Friday, Jan. 28, 2022, along Sunset Avenue near the highway?s exchange with Interstate 49 in Springdale. A 189-mile portion of U.S. 412 in Arkansas and Oklahoma has been officially designated a future Interstate on the National Highway System. Visit nwaonline.com/220130Daily/ for today's photo gallery. (NWA Democrat-Gazette/Andy Shupe) 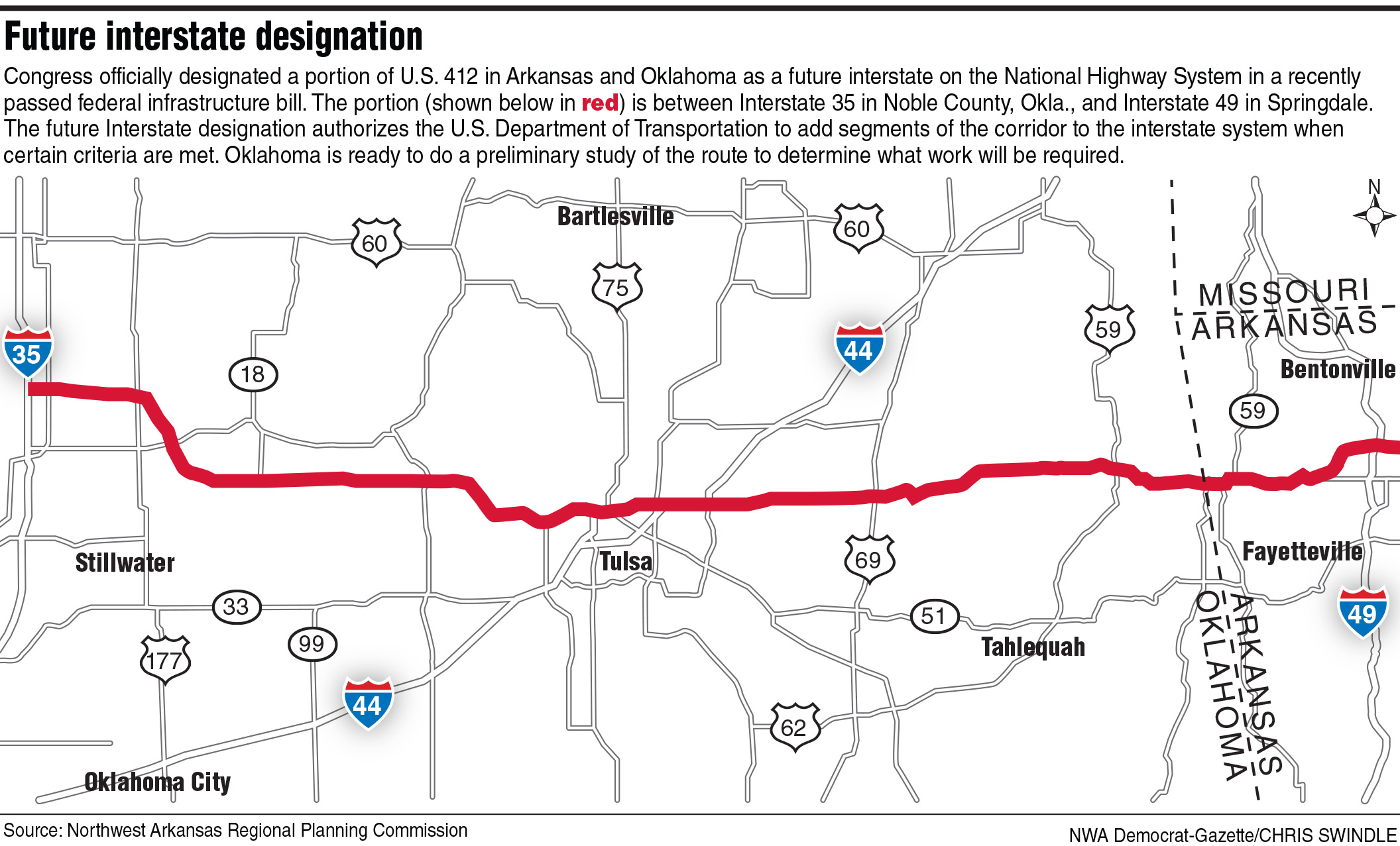