Mattarella reelected as president of Italy 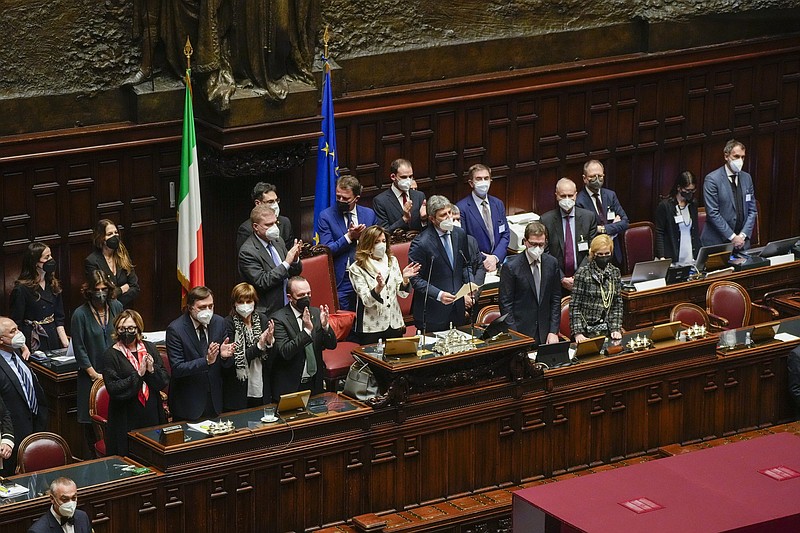 President of the Senate Maria Elisabetta Alberti Casellati, center left, and lawmakers applauded as low Chamber President Roberto Fico, center right, announces that Sergio Mattarella is re-elected as Italy's 13th president in the Italian parliament in Rome, Saturday, Jan. 29, 2022, at the end of the eighth round of voting. (AP Photo/Gregorio Borgia, Pool)

Earlier Saturday, lawmakers entreated Mattarella, 80, who had said he didn't want a second mandate, to change his mind and agree to reelection by lawmakers in Parliament and regional delegates. That move followed days of fruitless efforts by political leaders to reach a consensus on another candidate.

[Video not showing up above? Click here to watch » arkansasonline.com/130mattarella/]

Mattarella won in the eighth round of voting when he clinched the minimum of 505 votes needed from the eligible 1,009 Grand Electors. The count then resumed, with Mattarella continuing on to win 759 votes.

But after a seventh round of balloting in six days in Parliament failed to yield any consensus on a presidential candidate, party whips and regional governors visited Mattarella at the presidential palace to solicit his willingness Saturday.

Mattarella's willingness to serve again "is a choice of generosity toward the country," Democratic Party leader Enrico Letta told a news conference minutes before Saturday's second, conclusive round of voting began.

Former Prime Minister Silvio Berlusconi, who heads the center-right Forza Italia party he founded, said that unity "today can only be found around the figure of President Sergio Mattarella, of whom we know we're asking a great sacrifice."

Health Minister Roberto Speranza, who heads a small left-wing party, told reporters that Mattarella's reelection would be crucial for "stability for Italy."

Conte's praise for Mattarella was all the more remarkable considering how, when Conte was trying to form Italy's first populist-led government in 2018, Mattarella intervened and vetoed his pick of a euro-skeptic economist for the post of finance minister, an appointment likely to have shaken financial markets' faith in Italy to stay in the eurozone.

Also lobbying for Mattarella was right-wing League party leader Matteo Salvini, whose candidates failed to take off in the early rounds. In 2019, Salvini suffered the humiliation of seeing Mattarella turn to Conte to form a government, this time without the League, after Salvini yanked his support in a failed bid to grab the premiership for himself.

Italy's presidency is a generally largely ceremonial role that sees the head of state make official trips abroad or receive visiting foreign leaders to strengthen Italy's international relations. On occasion, the president can send legislation back to Parliament to modify aspects deemed not in keeping with the postwar constitution.

During the pandemic, Mattarella also staunchly backed the nation's vaccination campaign -- one of the more successful ones in Europe -- as critical to Italy's economic recovery.

Mattarella's brother, Piersanti Mattarella, was assassinated by the Sicilian Mafia in 1980 while serving as that island's governor.

A Palermo native, Sergio Mattarella began his career in Parliament in 1983. He was active in the Catholic social movement faction of the Christian Democrats, then the dominant postwar party in Italy. Mattarella had been serving as a judge on the nation's constitutional court from 2011 until his election as head of state on Jan. 31, 2015.