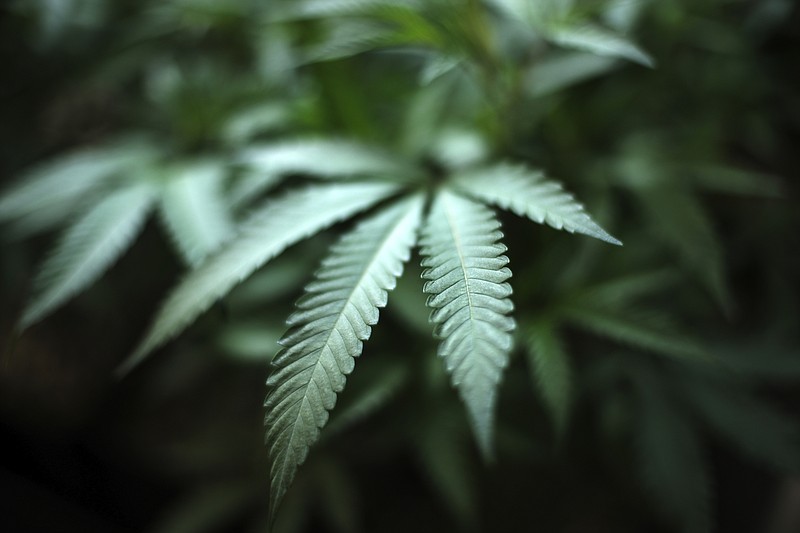 In this Aug. 15, 2019, file photo, marijuana grows at an indoor cannabis farm in Gardena, Calif. With nine research grants announced Thursday, Sept. 19, 2019, the U.S. government will spend $3 million to find out if marijuana can relieve pain, but none of the money will be used to study the part of the plant that gets people high. (AP Photo/Richard Vogel, File)

A third group seeking to legalize marijuana for adult recreational use in Arkansas filed a petition for a proposed constitutional amendment to appear on the ballot in November, providing the group obtains enough signatures on petitions.

The Arkansas Adult Use Cannabis Amendment is backed by the ballot question committee Responsible Growth Arkansas and has been vetted for the past several months by a consortium of dispensary owners and cultivators, committee chairman Eddie Armstrong said in an interview Tuesday.

The sponsors must obtain thousands of signatures on petitions to get the measure on the general election ballot.

Arkansas voters approved Amendment 98, the constitutional change that legalized cannabis for medical use, in 2016, and the first dispensaries in the state opened in 2019.

Under the proposed amendment, the state Alcoholic Beverage Control Division would issue adult use cultivation and dispensary licenses to entities that already hold licenses under Amendment 98 on or before March 7, 2023.

The amendment would create two "tiers" of cultivation facility licenses.

"Tier One" licenses would go to the existing cultivation license holders.

On or before Nov. 8, 2023, the Alcoholic Beverage Control Division would issue 12 "Tier Two" licenses to facilities chosen by a lottery. Those facilities would be limited to growing up to 250 mature cannabis plants at any one time, according to the amendment.

Armstrong described the amendment as a "more responsible and regulated approach to expanding into this adult cannabis space for Arkansas," which he said was the goal of the industry stakeholders who worked on it.

"We took a look at how this could be done in a meaningful and well-regulated way for Arkansans," Armstrong said.

Since filing its initial paperwork in October, the ballot question committee supporting the effort has raised $1.75 million and spent more than $46,000 toward the effort, according to reports filed with the Arkansas Ethics Commission.

The initiative's funding and the restrictions in the amendment sparked criticism from the backers of two other recreational marijuana initiatives that have been filed with the state.

Melissa Fults, who filed an amendment that would allow Arkansas to have a number of cannabis businesses proportional to the state's population, said the amendment would allow the large cultivators to profit while squeezing out competition.

"It's going to be a horrible monopoly. It's going to be awful for the state. There's no expungement of records, so they're going to be making millions upon millions of dollars when there's people who still have a felony on their record for a joint," Fults said.

Fults' amendment, as well as another backed by the group Arkansas True Grass, would allow for people with criminal charges related to marijuana use to have those charges expunged from their criminal records.

The Arkansas True Grass Amendment would allow an unlimited number of businesses and would automatically release people who are incarcerated solely because of a marijuana-related charge.

Jesse Raphael, a spokesman for the group, called the Responsible Growth Arkansas amendment "a power grab by the medical monopoly."

"It locks in all of the production for the recreational marijuana for the current producers of medical marijuana," he said, adding that another concern the group has about the amendment is that it doesn't allow people to grow their own cannabis at home.

To qualify to place a constitutional amendment on the ballot, a group must collect at least 89,151 valid signatures of registered voters, or 10% of the votes cast for governor in the 2018 general election.