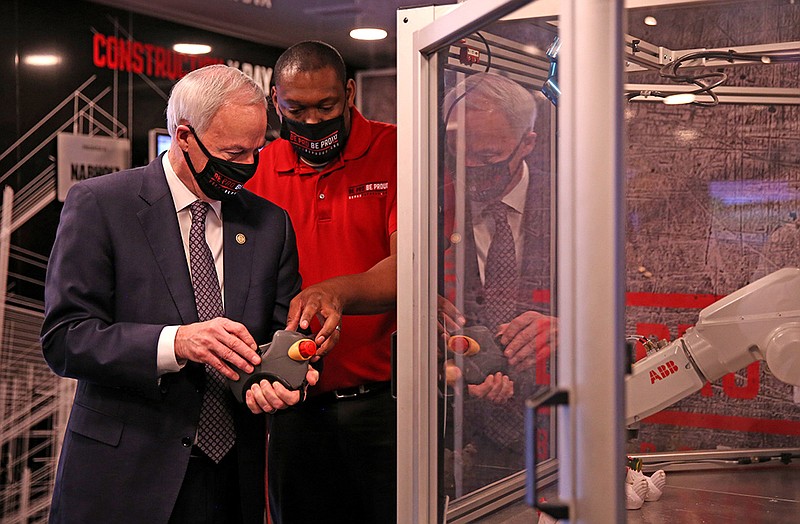 Gov. Asa Hutchinson, far left, receives instruction on how to operate a robotic arm from Montrell Thornton, second from left, during an event at the state capitol celebrating the Be Pro Be Proud economic development initiative Monday, Jan. 24, 2022. (Arkansas Democrat-Gazette/Colin Murphey)

The state Office of Skills Development is providing a $1.5 million grant for a second mobile unit for the private-sector-led "Be Pro Be Proud" initiative to provide information to Arkansas students about jobs requiring technical skills, Gov. Asa Hutchinson announced Monday.

The Arkansas State Chamber of Commerce, Associated General Contractors of Arkansas and the Arkansas Trucking Association created this initiative several years ago to help young people understand their different options in private industry in order to make a good living, the Republican governor said.

The first mobile unit was purchased in 2018 to replace an initial temporary unit, and "since we've had one unit just like the one here on the road, we've had 124 visits," Hutchinson said at a news conference in front of a mobile unit south of the state Capitol. He was joined by several dozen officials.

"But right now there are 135 schools on a waiting list" for a visit from a mobile unit, the governor said. "That means there are students that want to have this exposure that don't have that opportunity. With that waiting list, we knew that we needed to have a duplicate, a second mobile unit."

According to the chamber-sponsored "Be Pro Be Proud" website, "The best opportunity to reach those who will make up the skilled workforce of the future is to bring the opportunity to them. Our mobile unit, the Workforce Workshop, provides hands-on experience with skilled professions while showing the jobs in depth to a live audience.

"The Workforce Workshop tour will feature a customized, interactive trailer loaded with information, skills challenges and more as it makes its way across Arkansas visiting companies, schools and community events."

Hutchinson joked about his experience in the mobile unit: "Today, I tried my hand at robotics and there is a reason that I'm governor and not a leader in robotics in industry."

Hutchinson said the state has now provided a total of $2.2 million to support the private-sector-led effort. The private sector will cover the operating costs of the second mobile unit, he said.

At the news conference, Randy Zook, chief executive officer and president of the Arkansas State Chamber of Commerce/Associated Industries of Arkansas, said private sector officials greatly underestimated the potential for this initiative.

Teachers across the state report a positive effect on their students' attitudes about their career paths and educational performance from the "Be Pro Be Proud" initiative, he said.

Two-year colleges report a positive impact on their enrollments from the initiative, and companies participating in the initiative are starting to see newly hired employees who resulted from it, he said.

More and more companies are starting to look to the initiative to help respond to short-term and long-term recruitment and hiring needs to fill skilled technical job openings, Zook said.

U.S. Rep. French Hill said, "Hats off to Randy Zook and his team for putting this on the road and making it a reality.

"It's a game changer," said Hill, a Republican from Little Rock.

Patrick Bruce, an academy career coach in the North Little Rock School District, said the "Be Pro Be Proud" initiative fills the gap to help students understand their options after high school graduation.

"I hear the students say, 'Where do I go from here? I can't afford college,'" he said. "But there is always an alternative.