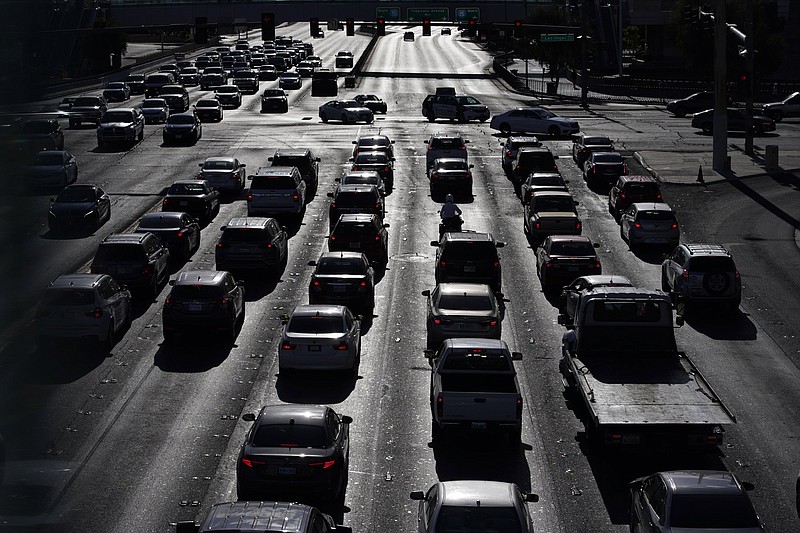 FILE - In this April 22, 2021 file photo, cars wait at a red light during rush hour at the Las Vegas Strip, in Las Vegas. Two organizations that influence many Americans? automobile buying decisions will begin rating vehicles on how well they track behavior of motorists who use partially automated driver-assist systems. Consumer Reports and the Insurance Institute for Highway Safety say the ratings will factor into scores for new models starting this year. The new ratings, announced Thursday, Jan. 20, 2022 come as the auto industry struggles with how to make sure drivers stay alert as the systems take on more driving functions. (AP Photo/John Locher, File)

DETROIT -- Two organizations that influence many Americans' automobile buying decisions will begin rating vehicles on how well they track behavior of motorists who use partially automated driver-assist systems.

Consumer Reports and the Insurance Institute for Highway Safety, or IIHS, say the ratings will factor into scores for new models starting this year. Automobile buyers often turn to both groups to judge the safety of vehicles.

The new ratings, announced last week, come as the auto industry struggles with how to make sure drivers stay alert as the systems take on more driving functions. Plus, the systems are being offered in more new vehicles.

Both groups say research shows drivers often rely too much on the computerized systems, even though they cannot drive vehicles themselves. At times, the systems have made mistakes and drivers have failed to take action -- with deadly consequences. Some automakers have oversold the systems' abilities in advertising, both groups said.

The organizations say they are stepping in with ratings and standards because at present there are none from the National Highway Traffic Safety Administration, the U.S. government's auto safety agency. The agency said in a statement that it's researching the monitoring systems to establish benchmarks and get driver data for possible future actions.

Both Consumer Reports and the Insurance Institute for Highway Safety hope that automakers will respond with more robust monitoring systems.

"Keeping drivers focused on the road and the vehicle is critical for the safe use of partially automated driving systems," said David Harkey, president of IIHS, an industry group that has shamed automakers into making safety improvements with its rankings.

Partially automated systems, with trade names such as "Autopilot," "Super Cruise," and "ProPilot Assist," vary in levels of sophistication. Some are a combination of lane-centering technology and advanced cruise control, which will adjust speed to keep a vehicle away from those in front of it. Others can change lanes on their own. Most use cameras and some have radar sensors.

But drivers are able to ignore some of the monitoring systems, especially with Tesla, which led the industry by rolling out its "Autopilot" driver-assist system in 2015. Government officials say no self-driving cars are available for sale and that drivers must be ready to take action at all times.

For example, in 2018, a Tesla operating on Autopilot crashed into a freeway barrier in Mountain View, California, killing the driver. The National Transportation Safety Board found that the driver likely was distracted by a cell phone video game.

The agency has opened a formal investigation into Teslas on Autopilot crashing into emergency vehicles parked on roadways. A message was left Thursday seeking comment from Tesla.

Some companies, such as General Motors, Ford, Tesla, BMW and Subaru, have cameras that watch a driver to make sure their eyes are on the road. Others only check for hands on the steering wheel. But since there are no federal standards, some monitoring can be turned off by drivers, while others don't take enough action to make drivers pay attention, both organizations said.

There is no evidence that the driving systems make vehicles safer, and research shows they could be less safe if the systems don't make sure drivers are engaged, Harkey said.

"There are studies that go back probably 80 years that show humans are pretty bad about just watching automation happen," said Jake Fisher, senior director of Consumer Reports' Auto Test Center. "It's just too easy to get bored and let your attention wander."

Currently, the partially automated systems aren't widely used. Harkey said the systems are a "single digit" percentage of the roughly 280 million vehicles on U.S. roadways. But they're being offered on a growing number of vehicles. Consumer Reports found last fall that they're available on about half of all new models.

At present, no driver monitoring systems meet the standards set by IIHS, Harkey said. To earn a coveted "good" rating, the systems have to have multiple types of alerts reminding a driver to look at the road. They also have to make a driver place hands on the steering wheel if they've looked away. If a driver fails to respond, the systems should slow the vehicles to a crawl or stop, IIHS said.

"We're hoping and we think that the automakers will respond and they'll start to add more robust features into their vehicles that have these systems," Harkey said.

In the past, automakers have re-engineered the front structure of models that didn't pass an IIHS crash test that simulated striking a tree.

Ratings are expected to start this year, but that could be delayed if vehicles aren't available for testing due to the global shortage of semiconductors.

Starting with ratings that come out in February, Consumer Reports will add two points to the overall score it gives vehicles if their systems monitor drivers to encourage safety, Fisher said. This year, only General Motors' "Super Cruse" and Ford's "Blue Cruise" systems will get the extra points, he said.

In the 2024 model year, the magazine and website will deduct two points if systems don't have adequate driver monitoring, rising to four points for 2026 models.

Consumer Reports and IIHS both said the auto industry has been aware of the ratings for about a year.