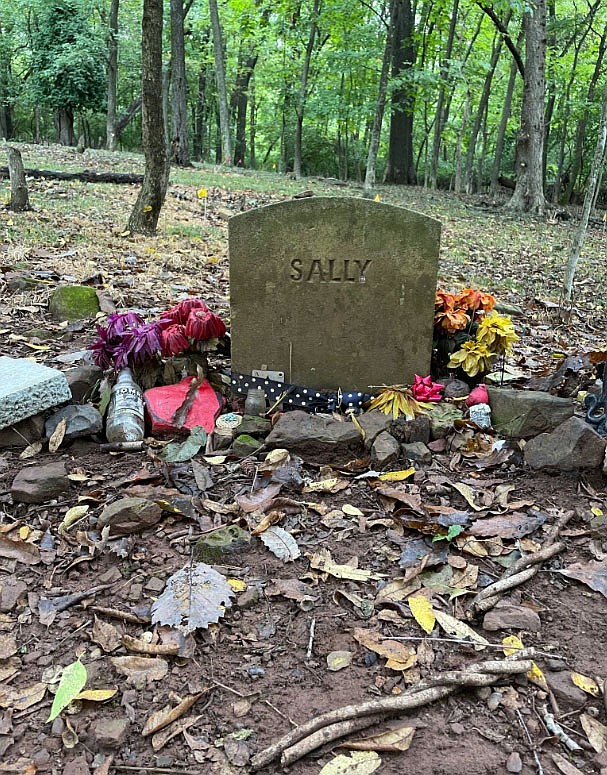 Sally’s headstone is located in East Mountain Cemetery in Fayetteville. Though there are 80 to 100 formerly enslaved people buried there, very few have headstones. Sally’s is the only one with any inscription. Her headstone lays beyond Sen. David Walker and his family’s fenced plot. Beyond Sally’s grave are small flags marking confirmed burial sites (and those still being investigated) of formerly enslaved people. (Special to NWA Democrat-Gazette/Grace Arnn)

Sally, an enslaved person during the 19th century, rests at East Mountain Cemetery in Fayetteville. Surrounding and beyond Sally's grave are yellow and red plastic flags marking spots where archaeologists believe 80 to 100 formerly enslaved people are buried, along with rugged bricks thought to be makeshift headstones. Unlike Sally's, those few existing headstones are completely blank, without inscriptions.

As for Sally, the Northwest Arkansas African American Heritage Association shared that "[she] was an enslaved woman sold by Lodawick Brodie to David Walker in 1843 when she was 45 years old," Sharon Killian, a founder and the former director of the NWA-AAHA, says. The rest of her story and the details about those she shares her final resting grounds with are mysteries waiting to be unearthed.

Until 2014, efforts to tell these individuals' stories had been buried along with their bodies. However, when the NWA-AAHA received the deed to East Mountain Cemetery, opportunities to illuminate these lives arose.

"Until our involvement, nothing was said in our local culture about Black people at East Mountain," Killian says. "This silence only served to disappear the people who created the riches in Northwest Arkansas with their very life."

Now, the association is working to find, record and begin the conversation about buried formerly enslaved people in East Mountain Cemetery through revitalization efforts that will establish the cemetery as a learning and cultural site, Killian says.

The nonprofit does not have any fundraising activities planned at the moment, Stephanie Conway of the NWA-AAHA says. There is, however, a donation button for the project on the nonprofit's website. It costs the NWA-AAHA $3,000 annually just to maintain the cemetery's landscape. Long-term goals, such as iron fencing, headstone restoration and memorial art, each require $20,000 independently, Conway says.

Formerly enslaved people at East Mountain Cemetery are typically found buried in east/west depressions, Killian explains. Sometimes the burial sites create rows, sometimes not. A portion of the graves are marked by bricks laid in a square formation where the person's head would rest, and those are located outside the fenced plots of the slave owners. Other graves were marked with stones, which are now strewn.

A few feet west of Sally stands the David Walker plot, where the former senator (1806-1879) and his family are buried with tall and elaborate headstones, surrounded by a wrought iron fence. Separated by a narrow gravel road, the Walker plot is a few feet uphill from the Fayetteville Confederate Cemetery, where Confederate soldiers from the Civil War are buried in neat rows enclosed by a handsome stonewall. East Mountain Cemetery predates the Confederate Cemetery, however.

The Confederate Cemetery is maintained by the Southern Memorial Association. Before 2014, the East Mountain Cemetery and David Walker plot were owned by the Wade family. In the early 1970s, Lynn Wade and his father, who was an attorney and senator, purchased the land. They were originally approached by a New York resident with a relationship to the Walker family who asked the Wades to help him sell the property. The Wades advertised the land, but they were not able to find any buyers. The Wades purchased the land as an accommodation after the failed sales attempt.

"It was very frustrating over the years trying to find a Boy Scout troop, a religious group, and different folks to have clean-ups... Basically, all the 50 years that we owned it, I was busy trying to find a nonprofit to take it on," Wade says.

The sites' locations, as a whole, are a juxtaposition. Killian says she hopes East Mountain Cemetery's future will be "beautiful, welcoming for everyone, not Confederate" and that it will work in "promoting truth and critical thinking."

"It so happens that East Mountain Cemetery and the Confederate Cemetery are both located inside the historic African American neighborhood along Willow and Spring streets and what is now part of the Washington-Willow neighborhood," Killian adds.

The University of Arkansas' Landscape Architecture program is working in conjunction with the NWA-AAHA to restore the cemetery with the "humanity of African Americans in mind," Killian explains. Beyond restoration, the program is developing community-centered design ideas for the site.

Solving major drainage issues caused by the cemetery's steep incline is the first course of action, Sharida Holloway of the NWA-AAHA explains.

"We have new ideas every day, but also there are irrigation issues at the cemetery," Holloway says. "Once we take care of that or get that figured out, we can move into phase two, but it would be counterproductive to put something in or install something right now because there is a lot of erosion going on."

"The drainage on the site was ridiculous to figure out," Shearman says. "It was terrible. You can literally see ruts that are several feet deep just from water."

Similar to human interference, weather, and animal activity, the drainage has the power to disturb burial sites or methodically placed objects, like bricks, vital to understanding what the cemetery holds, Shearman explains. "We were terrified because the survey maintenance team had to mark out where every single thing was: every tree, every mountain, every rock, everything, so we were there and just wondering how many bodies we could be walking over and not even know."

"Typically, markers for enslaved people were more ephemeral than what we think of as cemetery markers," says Jama Grove, who has a Ph.D. in history and works as an assistant professor at Centenary University.

Contrastingly, burial practices in the white community focused on perpetuating individuals' status and wealth and beyond their death, Grove explains. Enslaved people did not experience the same privileges, nor did they have the resources to provide similar memorials. Burials were much more performative in the moment for enslaved people rather than for the future, Grove says.

"You see a lot of practices that cross poverty lines, regardless of race, of fixing a particular stone, or a particularly prominent tree as what we would think of as a headstone," Grove says. "But you also see a lot of things like simple wooden markers that simply wouldn't survive."

The lack of preserved grave markers at East Mountain Cemetery invited methods, including dowsing, to search for and locate unmarked graves. The Wade family led the dowsing initiative.

Dowsing is a folk practice that includes loosely holding two sticks or rods, walking around an area, and waiting until the two sticks cross, creating an "X," explains Anne Marie Martin, who holds a Ph.D. in history, specializes in death and burial history and is an assistant professor at Catawba College. The crossing rods are thought to represent a water or well line.

"It's 100% a folk belief, but it has worked well enough in the past that some people still choose to do it," Martin says. "I mean, I could guess that if you were operating under that assumption, you might think that you're finding an abnormality in the ground for a burial."

Dowsing is typically used to identify underground water; however, some scholars are considering dowsing for unmarked graves and successful instances have been reported. Small flags around the cemetery represent plots the dowsers and archaeologists believe someone was buried.

Volunteers visit the cemetery to clear brush, mow the lawn and maintain the space. At the beginning of the project, the site's extreme overgrowth required weekly volunteer efforts. However, volunteer events are now planned at least twice a year in the spring and fall through a Facebook page Conway created, Conway explains.

The NWA-AAHA's efforts go beyond physical maintenance as they search for the identities and stories of those resting beneath the ground of East Mountain Cemetery.

"We interview people throughout the community on their family history in the past. That's how we are making connections now. ... The paperwork I have is at least 10 years old from an ancestry database online. ...We have to stick things together," Holloway explains.

The organization is working to digitize the resources they have collected, but challenges arise. For example, enslaved people were typically given their enslaver's last name; however, inconsistencies in spelling can make tracing those people through censuses difficult. Furthermore, enslaved people were barred from literacy, adding an extra challenge when tracing records, Holloway explains.

"All of the people interred at East Mountain Cemetery have a story to tell about how we've come to be who we are as a city, region and state, and our efforts will lead to forging an equitable path," Killian says. 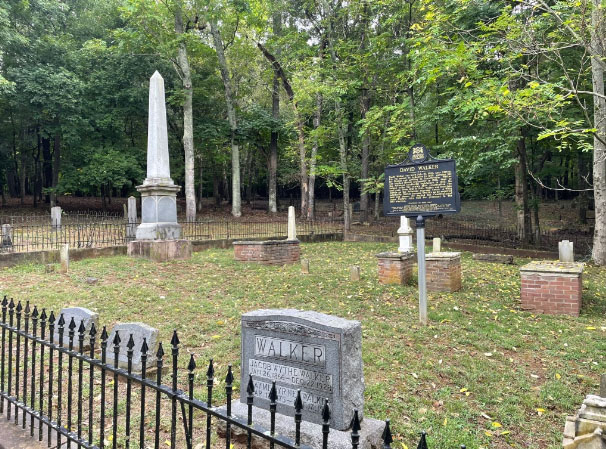 The Walker plot, where David Walker and the former senator’s family are buried, is in close physical proximity to where Sally and many other formerly enslaved individuals’ burial sites are located on East Mountain. (Special to NWA Democrat-Gazette/Grace Arnn) 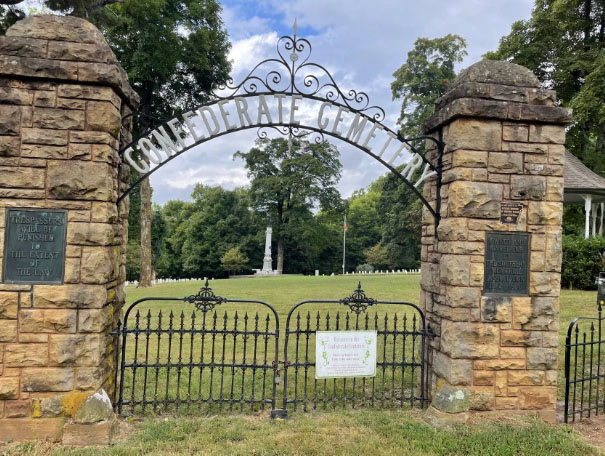 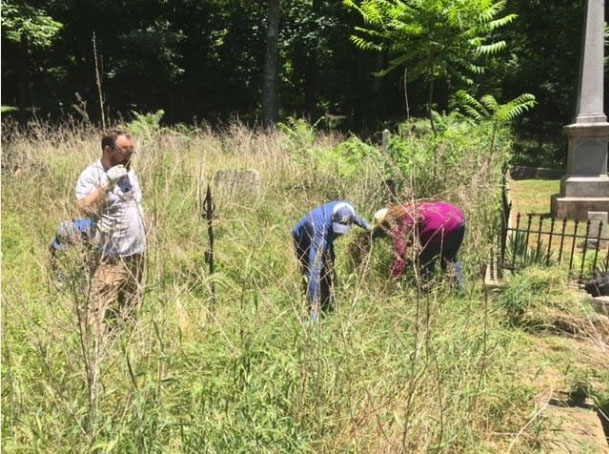