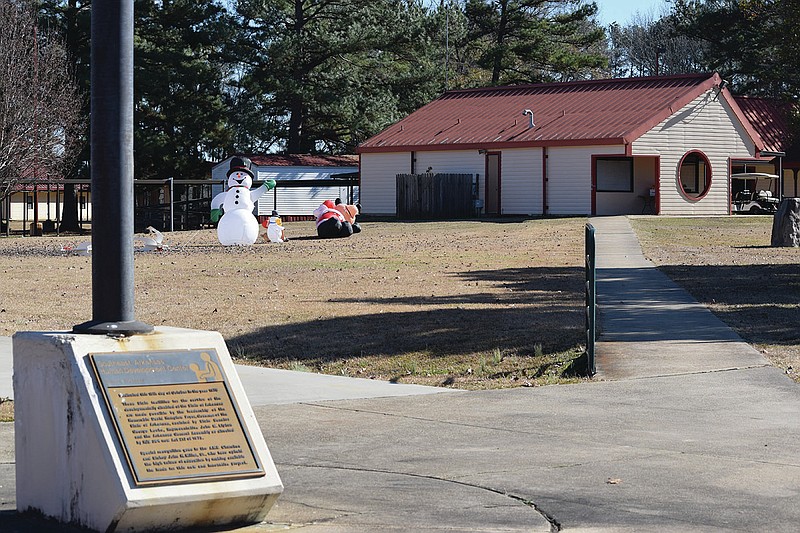 The Arkansas Department of Human Services asked the state Legislature on Wednesday for permission to require employees at seven of its health care facilities to be vaccinated against covid-19.

Legislative leaders expect similar requests from other state entities -- like the University of Arkansas for Medical Sciences -- by the end of the week.

The already controversial mandates have been further complicated by conflicting state and federal directives.

The federal Centers for Medicare and Medicaid Services issued the vaccination requirement in November for workers in most health care facilities.

The federal rule directly conflicts with Act 977, a state law passed last year that says covid-19 vaccination "shall not be a condition of education, employment, entry, or services from the state or a state agency or entity" unless the Arkansas Legislative Council approves an exception.

Arkansas was one of 10 states to challenge the federal directive, but the U.S. Supreme Court upheld the mandate Jan. 13.

Arkansas Department of Human Services Secretary Cindy Gillespie asked for an exemption from state law to implement coronavirus vaccination requirements at seven of the agency's facilities across Arkansas.

"This request is made only to keep DHS in compliance with federal law and protect the federal funding that keeps our healthcare facilities open, as DHS opposes the [mandate] in principle," Gillespie wrote in a letter to the Legislative Council co-chairs, state Rep. Jeff Wardlaw, R-Hermitage, and state Sen. Terry Rice, R-Waldron.

Wardlaw said the Legislative Council will hear and consider the Department of Human Services' request at its regular meeting Jan. 28. The council expects similar requests from the UAMS and the state Department of Veterans Affairs by Friday, he said.

He has said the potential loss of Medicare and Medicaid funding would merit approving the requests.

"It is what it is, and we can't lose funding," he said Wednesday.

The federal mandate applies to the five human development centers, the State Hospital and the Arkansas Health Center run by the Department of Human Services. They receive a total of nearly $125 million in Medicare and Medicaid funding.

Gillespie told the Legislative Council in November that she feared the mandate would drive staff members at the already short-staffed facilities to leave.

She sent a letter on Dec. 17 to the Centers for Medicare and Medicaid Services -- co-signed by Hutchinson as well as Wardlaw, Rice and other legislators -- expressing opposition to the "oppressive, wide-ranging vaccine mandate" as part of the centers' public comment period after releasing the requirement.

Five of the seven affected facilities are in rural areas of Arkansas, making staffing during a pandemic a challenge on its own, and health care employees throughout the country have shown resistance to being vaccinated against covid-19, Gillespie wrote.

"By directly threatening the ability of DHS to maintain the adequate staffing that is essential to protecting the health and safety of the residents of these facilities, the overall harm that will be inflicted by this [mandate] will far exceed any benefit that may accrue in the battle against covid-19," Gillespie wrote.

At the time, 63% of employees in the seven affected facilities were fully vaccinated, she wrote.

That number now exceeds 70%, according to data from Human Services spokeswoman Amy Webb.

The same facilities saw staff attrition rates between 26% and 79% between July 2020 and June 2021, and wage increases for health care workers did not mitigate the problem, Gillespie wrote.

On Wednesday, Gillespie presented the department's fiscal 2023 budget to the state Legislature's Joint Budget Committee. Rice asked if the department was prepared to lose employees who do not comply with the vaccination mandate.

"Our budget at this stage presumes, unfortunately, the same type of turnover issues that we've had throughout the last two years, which is an extremely high turnover rate at our facilities, and continuing to have to contract because that is our reality as we face it today," Gillespie said.

Rice also asked if the department will accept employees' requests for medical and religious exemptions to the vaccination mandate. Such exemptions are allowed under the federal rule.

The department has already drafted an exemption policy that will go into effect if the Legislative Council approves the request, said Mark White, the department's chief of staff for legal and legislative affairs.

A "sincerely held religious belief" has been the standard basis for exemptions, he said.

"We're going to make that process as simple for the employee as we can, because we don't want to put any obstacles in the place of employees who have those convictions and want to claim that exemption," White said.

A strongly held belief regardless of religion has historically been the determining factor for exemptions, said state Sen. Jonathan Dismang, R-Beebe, the budget committee's Senate chairman.

"I've heard from some [health care workers], 'It's not against my religion and I think it would be wrong for me to sign this even though I'm not willing to take the vaccine,'" Dismang told Gillespie and White. "It's my understanding that in a lot of health care, that's a discussion that's happening amongst their legal teams, and I'm sure yours too, and one that we really need to make sure we comprehend as a legislative body."

White said the law "does not give a lot of leeway to second-guess" whether a person's strongly held beliefs are tied to religious beliefs.

UAMS is still seeking a meeting with the Legislative Council, spokeswoman Leslie Taylor said. She said last week that the institution was reviewing the Supreme Court ruling and would await further guidance from the Centers for Medicare and Medicaid Services.

Taylor did not say whether the institution will request a vaccination requirement for a second time.

UAMS Chancellor Cam Patterson made the first request to the Legislative Council in November, saying $600 million in Medicare and Medicaid funding would be at risk if the institution did not comply with the federal mandate. At the same hearing, Gillespie did not request a vaccination requirement but said she wanted to take steps in that direction.

The council voted to postpone a decision on Patterson's request while waiting for a decision in the 10-state challenge to the mandate, and both UAMS and the Department of Human Services withdrew their petitions to the council Nov. 30 after a federal judge blocked the rule's enforcement.

The rule also applies to the state veterans homes in Little Rock and Fayetteville, run by the Arkansas Department of Veterans Affairs, which provides veterans with nursing home services such as hospice care, and physical and occupational therapy. A spokesperson for the department did not respond to a request for comment Wednesday.

The federal mandate also applies to most private hospitals and clinics in the state, though most private facilities implemented vaccination requirements last year. Act 977 does not apply to private entities.

The federal mandate covers 17 million health care workers at 76,000 health care facilities across the U.S., including home health providers. It originally stated that these employees must be fully vaccinated by Jan. 4.

A facility with more than 80% of its staff fully vaccinated and a plan to reach 100% within the following 60 days will not face sanctions, the rule states.

Florida has a state law similar to the one in Arkansas prohibiting vaccination against covid-19 from being a condition of employment, and Florida Gov. Ron DeSantis said Jan. 13 that the state will not enforce the mandate from the Centers for Medicare and Medicaid Services.