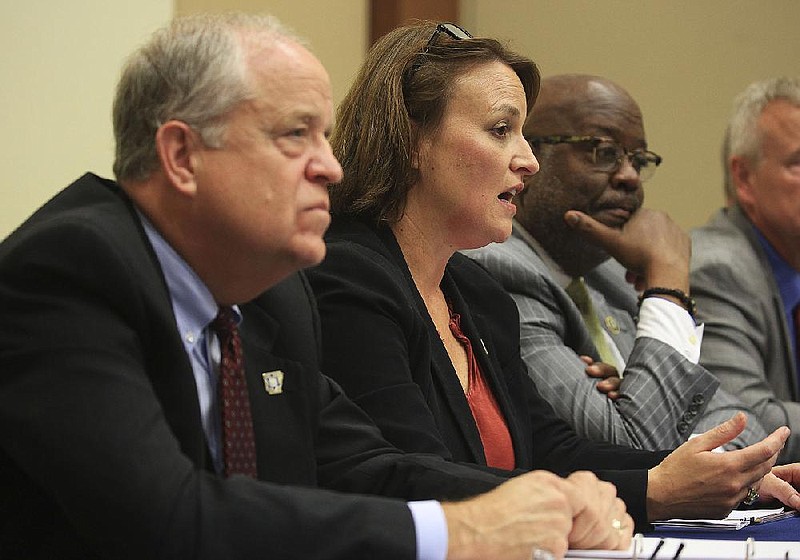 Arkansas State Police Director Bill Bryant told state lawmakers Tuesday that his agency's goal is to raise the starting salary for state troopers from $42,357 to between $52,000 and $55,000 a year because the pay lags behind other state police agencies in the region.

Gov. Asa Hutchinson has proposed a $7.4 million increase in the general revenue budget for the Arkansas State Police to $78 million in fiscal 2023, which starts July 1.

The Republican governor said last week that he wants to increase the salaries of entry-level state troopers and benefit those with seniority in the coming fiscal year. Hutchinson wants to elevate the state police's starting salaries to be second among Southern states and set an example for local governments in Arkansas.

Bryant said the state police has 525 trooper positions filled and 61 vacancies. Vacancies are expected to drop to 22 if all 39 recruits report to the training academy next week, he said.

Department of Public Safety Secretary Jami Cook and the department's human resources staff are working closely with the state's Office of Personnel Management to complete work on the pay raise plan "to try to avoid these issues with [salary] compression," Bryant said Tuesday during the Arkansas Legislative Council and Joint Budget Committees' budget hearings of state agencies in advance of the Legislature's fiscal session that starts Feb. 14.

"What we haven't done in the past is we really did not recognize years of service or time and grade, and what that resulted in is some of our corporals are making more than our sergeants," he said.

The Texas Department of Public Safety pays its troopers what is called availability pay, so every week they get 10 hours of overtime and that gives them a tremendous boost in salary, Bryant said. An Arkansas state trooper with a starting salary of $42,537 in south Arkansas can go to the Texas Department of Public Safety and make $100,000 a year after five years, he said.

In response to a question from Sen. Kim Hammer, R-Benton, Bryant said he is aware of two Arkansas state troopers who left to be troopers in Texas.

Bryant also said that four Arkansas troopers were shot at over a six-month period in 2021, and that's the highest level in his seven years as director.

"Our people do historic things every day nobody ever hears about," he said. "They do a great job and are committed to the job, but they have families to support, just like you and I do. They have kids. It would be great if we get that salary up. We have a lot of people work second jobs to be able to feed their families."

Rep. Mark Berry, R-Ozark, noted that the number of applicants for state trooper has declined from 1,373 for 2013 to 226 for this year.

Bryant said the pay levels and increased scrutiny of law enforcement have reduced the number of applicants.

Bryant said making the starting salaries competitive would be "a huge investment" for Arkansas and that Hutchinson "was spot on" that this plan would set an example for cities and counties to do the same for their law enforcement officers.

He questioned whether state officials have taken into account the effect the plan would have on local law enforcement agencies' ability to retain officers.

Bryant said the culture of government needs to change to recognize how important law enforcement officers are.

He said he would encourage city and county governments to follow the state police's model and raise salaries to retain officers.

Some local governments in south Arkansas probably couldn't increase their budgets to raise officers' pay because they are losing population each year and have lower budgets for public safety, he said.

Garner asked Bryant if it would make more sense for the state to take a broader action to boost salaries for law enforcement officers across the state in order to recruit and retain them.

Bryant said state lawmakers would have to weigh that matter.

"It is very complex, and I don't think there is a silver bullet answer to that," he said.

Garner said the Legislature should adopt a tax credit or "something else" to help out state and local law enforcement officers across the state.

CORRECTION: Arkansas State Police Director Bill Bryant told lawmakers on Tuesday that four Arkansas state police troopers were shot at over a six-month period in 2021, and that’s the highest level since he’s been director of the Arkansas state police for seven years. An earlier version of this story incorrectly described what happened to the troopers.