Remember when, Arkansas? In 1980s, creators of KABF radio asked donors to buy them some watts 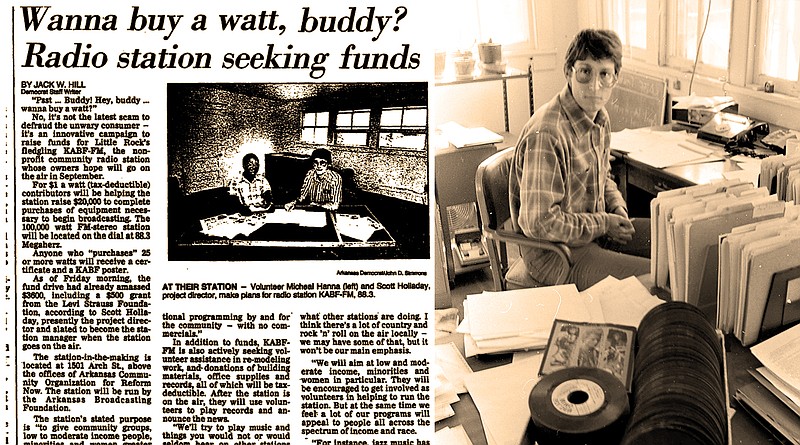 Scott Holladay, station manager of KABF-FM, 88.3, poses Jan. 19, 1984, with a box of records donated by a supporter of the Little Rock community radio station, which had just erected its transmitter on Crystal Mountain. (Democrat-Gazette archives)

Does anyone recognize what's happening in this photo from the Democrat-Gazette archives?

With a few exceptions (like KARN-AM), in the 1980s, Central Arkansas radio paid only the least legally required attention to public affairs. An educational station, KLRE-FM, precursor of today's public powerhouse KLRE/KUAR-FM, was heard only in and near the capital city.

Meanwhile, volunteers with ACORN (Arkansas Community Organizations for Reform Now) were trying to create KABF-FM, 88.3, a station that would air diverse genres and local artists while offering a platform to community groups. The A, B and F stood for Arkansas Broadcasting Foundation, which owned the license for a 100,000 watt signal.

With grants from ACORN, the Roman Catholic Diocese of Little Rock, the federal government and individual donations, KABF acquired a secondhand transmitter that needed work.

The Wanna Buy a Watt? fund drive suggested that each $1 donated would buy one watt for the transmitter. Donors who gave $25 or more got a poster and a certificate.

When the Arkansas Democrat's Alex Brandon shot this photo in January 1984, the foundation had just erected KABF's 200-foot broadcast tower and its transmitter building atop Crystal Mountain, adjacent to Shinall Mountain's antenna farm. The bespectacled Scott Holladay, station manager, predicted they might get on the air by February.

Jim Youngdahl, a lawyer, had donated about 100 records, including some jazz and blues on old 78 rpm discs (known as "78s").

But they still needed a broadcast studio and some turntables, a console, tape recorders. It wasn't until August 1984, with a federal deadline looming, that KABF aired its first program, at 10,000 watts.

Three years later, it jumped up to 100,000 watts. But setbacks lay ahead. Read what happened next at arkansasonline.com/0117kabf/.