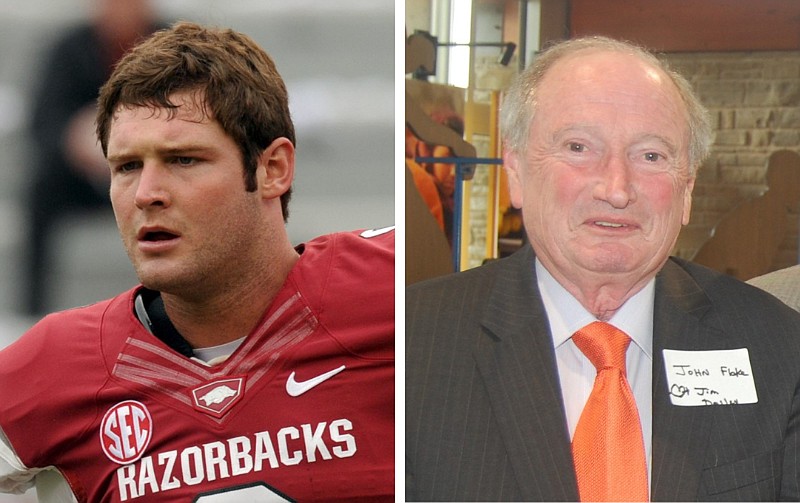 Tyler Wilson (left) and John Flake are shown in this combination photo. Wilson was photographed in Fayetteville as the quarterback for the Arkansas Razorbacks in September 2012, while Flake was photographed at a Leadership Greater Little Rock event at Heifer Village in Little Rock in April 2017. (Arkansas Democrat-Gazette file photos)

Wilson will serve as president of Cirrus Investments while Flake will serve as partner and adviser. Wilson also will join Flake & Company as a licensed broker.

At first blush, the pairing is an unusual one: The diminutive Flake and Wilson, who set 29 records as quarterback at the University of Arkansas and spent time with three National Football League teams before turning to a career in business.

Flake's bonafides are unquestioned in real estate, where he has worked for 50 years on a wide array of commercial real estate projects, including the 40-story Simmons Bank building in downtown Little Rock.

Flake said he also has held ownership stakes in an array of companies, including Southwest Media, which once owned Little Rock television station KARK-TV, Channel 4, and two other television stations, and AGL, a Jacksonville company that manufactured laser systems for the construction industry.

Wilson, meanwhile, quietly has been building his own post-football resume.

"I've been under the radar," he said.

He has worked for several years under commercial real estate broker Leonard Boen at Commercial Realty, where he was involved in Dollar General Store developments in Tennessee and Arkansas.

"We did all the triple net leasing and those were ground-up build-to-lease triple net leases ... brokering them and putting them together," Wilson said. A triple net lease, according to Investopedia, is a lease agreement on a property where the tenant promises to pay all the property expenses, including real estate taxes, building insurance and maintenance, in addition to rent and utilities.

Wilson also is an executive at Delta Solar, which handles all aspects of commercial and agricultural solar installation.

His experience with the Razorback brand also is helpful.

"Up on The Hill, there was some good times, fun times but also some challenging times," Wilson said.

Cirrus is a 50-50 partnership between Flake and Wilson. They already have their eye on some investments.

It won't be just real estate.

"Most of my career has been in real estate, but we intend to invest in other financial assets besides real estate, which could include operating companies or whatever we see," Flake said.

Wilson sees a favorable environment for investing in assets affected by the covid pandemic while interest rates remain low.

"We're real excited with what we bring to the table," he said, "with John's experience and my knowledge of triple net leases.

"We intend to do big things, reach for the stars and grab it."