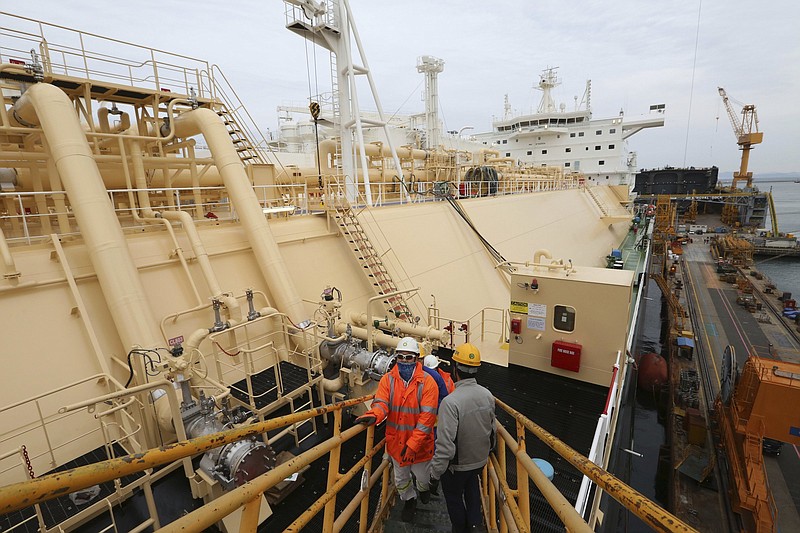 Workers board a liquefied natural gas ship under construction at the Daewoo Shipbuilding and Marine Engineering facility on South Korea’s Geoje Island. (AP)

BRUSSELS -- The European Union on Thursday rejected the merger between South Korean shipbuilders Hyundai and Daewoo, saying a union between two of the world's biggest players in the industry would have given the combined company a global stranglehold on the production of liquefied natural gas carriers.

EU Competition Commissioner Margrethe Vestager says the merger "would have led to less choice, higher prices and ultimately less innovation for European customers." European companies account for almost half the orders in the $45 billion market.

"We prohibited the merger," Vestager said, arguing the new company would have eliminated a major player and grabbed a global market share exceeding 60%.

And it is not an easy market for new players to jump into. Building liquefied natural gas ships is a complicated process that requires transporting frozen gas at minus 260 degrees Fahrenheit across the globe.

"Only a handful of shipbuilders around the world are able to build these vessels," she said.

Hyundai Heavy Industries Holdings called the decision disappointing, saying it "will pursue possible measures, including an appeal to the General Court of the European Union." It denied that the new company would have a chokehold on the market, saying "credible competitors already exist," including Samsung in South Korea and Mitsubishi and Kawasaki in Japan.

While Vestager's office is powerful in vetting such mergers and ensuring European consumers are not hurt by dominant players in the market, it was only the 10th merger that it has blocked in the past decade among 3,000 requests for approval.

Under EU rules, the European Commission can reject mergers even outside its borders because they would affect markets in the 27-nation bloc if the companies do business there. In the case of the liquefied natural gas carriers, the new company would have a huge stake in the European markets. To move forward, the two companies would put themselves outside of EU law and lose a huge part of their market.

"It does not matter where the merging firms are located," Vestager said. "What matters is whether they compete for demand in Europe. Companies are always welcome to grow by acquisition, as long as this is not at the expense of choice, price, quality and innovation in the European single market."

She said the EU also had been in contact with South Korean and Japanese fair trade commissions, which still have to make their own decisions on the merger.

The EU's move came as the 27-nation bloc is struggling with a natural gas shortage that has led to surging prices and put millions of families in trouble at the height of winter. Even though natural gas is still a polluting fossil fuel, it does so to a lesser extent than coal and is being promoted in the EU as a bridge toward cleaner energies in the future.

The continent is importing more liquid natural gas to fill the gap, hence the need for competitive pricing in the transport ships bracket.

"Diversification of sources of supply is fundamental. About a quarter of all of the EU's energy consumption is accounted for by natural gas, most of which is imported, including in the form of LNG," Vestager said.