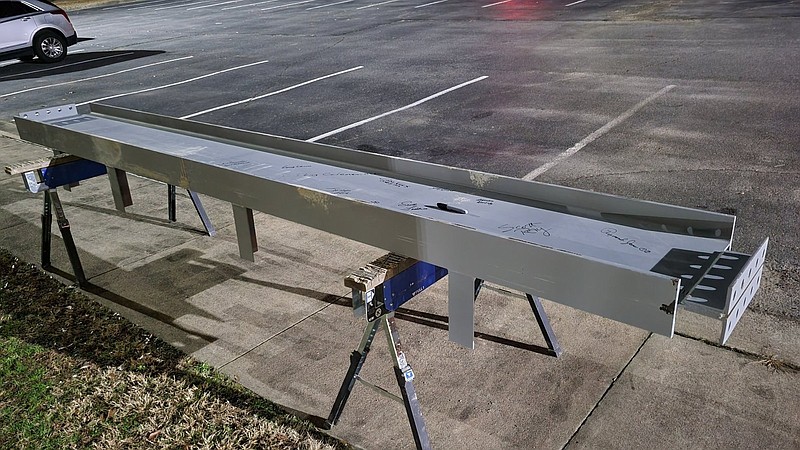 An I-beam rests outside the White Hall School District administration building during Tuesday’s board meeting. Board and faculty members signed the beam, which will be used to “top out” the fine arts building at the high school during a ceremony today. (Pine Bluff Commercial/I.C. Murrell)

Five White Hall School District students connected to social media threats posted in December were expelled from campus for the rest of the school year during Tuesday night's board meeting.

Three of the students participated in individual hearings, each of them closed at their request, while the other two declined the procedure, Superintendent Doug Dorris said.

The students were arrested and removed from campus on suspicion of posting threats between Dec. 8-10. Four high school students allegedly made threats on the app Yik Yak that "were possibly involving the White Hall High School," and a middle school student allegedly posted a threat on Instagram "to the safety and security" of that school, according to White Hall Police Chief Greg Shapiro.

Shapiro said last month the case for each student was referred to Juvenile Court. Juvenile suspects are typically not named unless they are charged with crimes as adults.

Each student will be allowed to continue their studies through online learning under state law, Dorris said.

'NO INTENTION TO GO VIRTUAL'

Dorris on Tuesday announced the WHSD would pivot to alternate methods of instruction from Wednesday through Friday due to an increase in covid-19 staff cases, which he said in a statement "has impacted our ability to adequately staff our campuses."

To be counted present, each student must attend through Google Meet and submit all assignments. If a parent is unable to provide childcare for a student, that student may attend on-site, but transportation is not being provided.

Tuesday was to be the seventh and last day of a district-wide temporary mandate for all students and staff members to wear masks on school property. Dorris enacted the rule when the combined number of covid-19 positive cases and quarantines in the district exceeded 30.

"By the time I think our world is starting to settle down and our world is going in the direction we all hoped it would, we get slammed again," Dorris said. "I had no intention this morning when I woke up we were going virtual, simply because we were able to handle the situation."

But Dorris chose the alternative when he said he got word that not enough substitute teachers would be able to cover every classroom.

Brown said $300,000 of the difference went to cover most of the $350,000 in bonuses the district awarded to staff members, but the district also lost $200,000 in state revenue for this school year as a result of a 91-student decrease from last year's enrollment.

Brown also said every classroom has been equipped with cameras, microphones and televisions. High school hallways will also see installation of new TVs for announcements.

The Arkansas Department of Education's Division of Career and Technical Education awarded White Hall schools a $30,307.77 grant toward establishing a veterinary science course for 2022-23 and $26,877 grant for advanced programming computer science courses for 2023-24.

"The grants will pay 85% of the cost of what we would want to utilize in these programs," assistant superintendent Debbie Jones said. "It's exciting to see our high school get those pieces together and grow and meet a lot of student needs happening there."

Dorris said the WHSD is still looking for bus drivers, and those who are interested should apply by Feb. 1, or they will be required to take an extra test for certification under state law.

Board and faculty members signed an I-beam that rested outside the district administration building Tuesday evening. That beam will "top out," or be one of the last pieces placed on, the new fine arts building during a ceremony scheduled for 2 p.m. today. The ceremony will be held at the bridge of the building.

Keyboard teacher Robbie Stewart was approved for a transfer from White Hall High to White Hall Middle seventh grade for 2022-23.