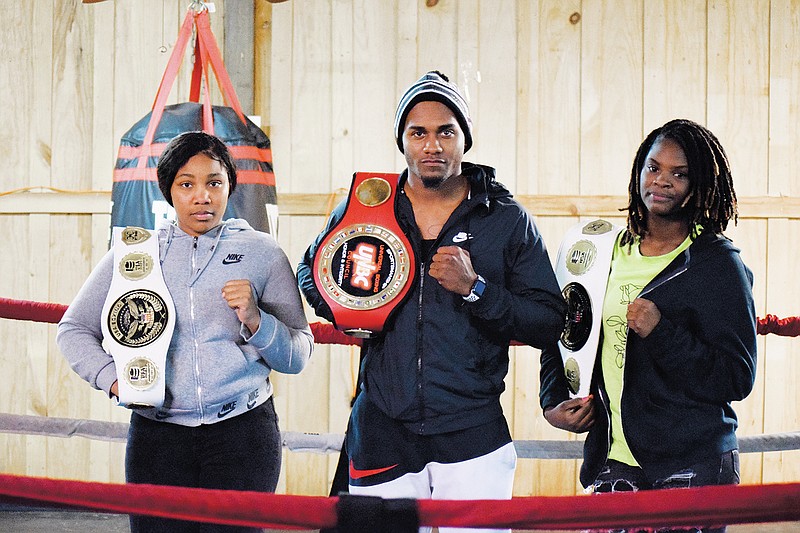 Jabreiona Hankinson, left, Tez'Waun Starlings and Tyesha Harrison pose in the ring at Hankinson Boxing Gym in Aiken, S.C. In 2015, James and Brittany Hankinson started a nonprofit boxing gym in their backyard to combat gun violence in Aiken County. Six years later, their trainees include half a dozen professional boxers and 13 state champions. (Alexandra Koch/The Aiken Standard via AP)

AIKEN, S.C. -- In 2015, James and Brittany Hankinson started a nonprofit boxing gym in their backyard to combat gun violence in South Carolina's Aiken County. Six years later, their trainees include half a dozen professional boxers and 13 state champions.

The first gym Hankinson trained at was owned by a local couple. He said that experience inspired him to mimic the program with his wife, Brittany, in Aiken County.

"Seeing how my coach and his wife took us in and how they loved us, I wanted to keep that same love," Hankinson said.

Growing up boxing, he said he recognized the impact the sport can have on youth and saw a need in Aiken County.

"I never played any other sport, so boxing was one of the things that I knew how to do," Hankinson said. "With all of the violence that was going on around Aiken at the time, my wife and I wanted to make a difference -- all of the kids were carrying around guns and killing each other. So we named the gym 'Gloves up, guns down.'"

Hankinson said the gym is more of a family than anything. Photos of young boxers fill the walls around the ring.

"It's history," Hankinson said while looking at the photos on the wall. "When the kids that come through the program leave, we follow them. When you get grown, that doesn't mean me and Brittany are out of your life. We go to all of the graduations, and it's nice to remember those memories."

The gym does not have an age limit, and they start training kids at age 7.

Hankinson said the program relies on word of mouth and social media to recruit participants.

He said Aiken Public Safety Chief Charles Barranco and school principals also spread the word about the work they're doing.

"It helps you be free," Jabreiona said. "Anybody can do it; it's just got to be in your heart to do it."

Tyesha Harrison, another 15-year-old who is a national champion in her weight class and trains with Hankinson, said the gym provides opportunities.

"It gives us opportunities to travel, learn self-control and boost our confidence," Tyesha said.

When asked about what it's like to break into a male-dominated sport, she said people at school are impressed.

"They're amazed that we're boxing," she said

Tez'Waun Starlings, who also trains with Hankinson, is now a professional boxer and recently won the title of 2021 UNBC Champion.

Starlings said he started boxing at a different gym when he was 9 years old.

"At first I didn't really like it, but the more I got into it -- it was something that I kind of fell in love with," he said.

Starlings took a break from boxing to join the military. When he came back, he decided he wanted to go professional, and Hankinson became his coach.

"I felt like the next level was required," he said. "So I got in contact with him, told him I wanted to go pro, and he told me what I needed to do."

Even though Starlings is a national champion, he said there's more to Hankinson Boxing Gym than just the sport.

"Here, it's more than boxing," he said. "We are a family. We put God first, then family, then boxing."

Print Headline: 'Gloves up, guns down'