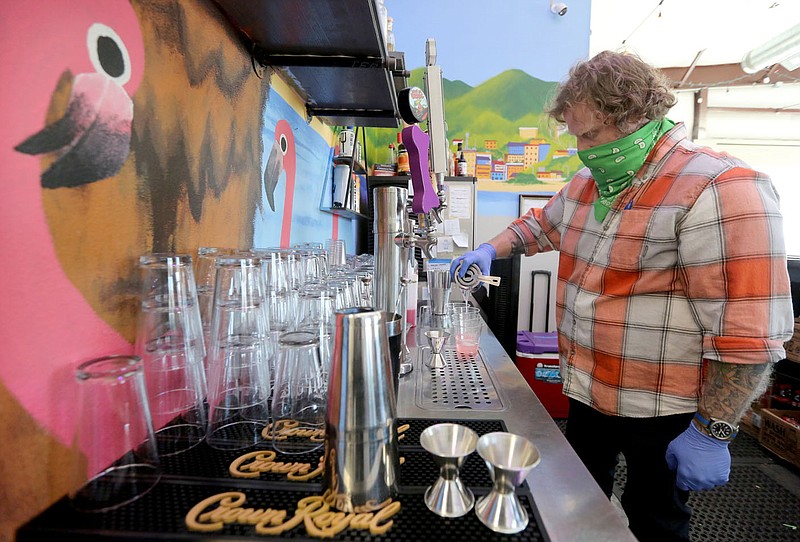 Jason Kindall, co-owner and bar manager, prepares a drink on Jan. 22, 2021, behind the bar at Nomads Trailside Kitchen and Bar in Fayetteville. The City Council will consider reinstating its mask mandate Tuesday. (File photo/NWA Democrat-Gazette/David Gottschalk)

FAYETTEVILLE -- The city may bring back its mask mandate in response to surging covid-19 cases associated with the omicron variant.

The City Council on Tuesday will discuss bringing back the mandate for city-owned buildings and public places. The most recent mandate expired Dec. 23.

Council member Teresa Turk sponsored the measure, saying it largely would match the previous mandate except for two notable differences. This version of the mandate would expire March 2 unless extended by the council, and the measure carries no enforcement mechanism, she said.

The council discussed reinstating the mandate during an agenda session Tuesday. The mandate would apply to public service areas in all places of public accommodation. Responsibility to wear a mask would lie on individuals, and businesses would not have to require masks.

The measure makes exceptions for when people are eating or drinking; settings with fewer than 10 people; areas without normal public access, such as semi-private offices and workshops; people with a disabling condition preventing mask-wearing; outdoor settings where social distancing cannot be achieved; and for children younger than 2.

City Attorney Kit Williams said the mandate would go into immediate effect if adopted Tuesday. He said the measure mostly would serve an educational purpose and show the council's commitment to the idea that people should wear masks in public.

Researchers with the University of Arkansas for Medical Sciences project the omicron variant will have cases peak over the next 30 days with a sustained level of new infections through February and into March. The City Council will have a regular meeting March 1, and if cases and hospitalizations have not subsided by then, the council could vote to extend the mandate, Williams said.

Mayor Lioneld Jordan would be able to require people to wear masks in city-owned buildings regardless of whether a citywide mandate is in place, Williams said.

The state's daily count of new reported covid-19 cases reached record levels last week, peaking at more than 8,000 new cases Friday. Tuesday's count was more than 7,700 new reported cases. The counts do not include many at-home tests taken that have become widely available.

Benton and Washington county hospitals were caring for around 30 covid-19 patients in November when the City Council decided to let its previous mandate expire. Marti Sharkey, the city's public health officer, said at the time that fewer than 30 covid hospitalizations and 100 covid and noncovid intensive care unit admissions was considered manageable.

Turk said the omicron variant has caused cases to skyrocket, and she has concerns about overwhelming the hospital systems. Fayetteville Public Schools and the University of Arkansas, Fayetteville, both require masks in public settings, and the city should too, she said.

"I don't like wearing a mask, either," Turk said. "But I feel we really need to do that."

The Fayetteville City Council will discuss reinstating a citywide mask mandate at 5:30 p.m. Tuesday in Room 219 of City Hall, 113 W. Mountain St. Members of the public can participate in person or online via Zoom.

For more information, go to http://fayetteville-ar.gov and click on “Participate in public meetings.”