Design of proposed Daisy Bates statue approved by Architect of the Capitol in Washington, D.C. 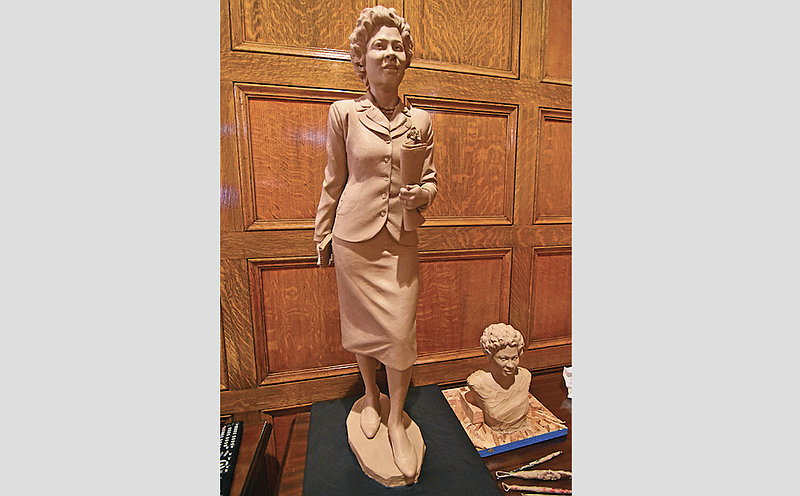 A clay sculpture of Daisy Gatson Bates by Benjamin Victor of Boise, Idaho sits in the governor's conference room during the Capitol Arts and Grounds Commission meeting with the National Statuary Hall Steering Committee and finalists of the Daisy Bates and Johnny Cash statues Wednesday at the State Capitol in Little Rock. (Arkansas Democrat-Gazette/Staci Vandagriff)

The nation's architect of the Capitol has approved a model of a statue of civil-rights leader Daisy Bates, the Arkansas secretary of state's office said Tuesday.

For the past few years, Arkansas has been in the process of replacing the two century-old statues that represent the state in the U.S. Capitol with likenesses of Bates and country music icon Johnny Cash.

State officials submitted photos of 3-foot-tall models, called maquettes, representing what both statues will look like, in November for the required approval from the federal government.

Kurt Naumann, director of administration and government relations for Arkansas Secretary of State John Thurston, told the state Capitol Arts and Grounds Commission and National Statuary Hall Steering Commission that he had received notification earlier Tuesday morning from the architect of the Capitol's office saying that the Bates maquette had been approved.

The approval means that Benjamin Victor, the artist selected by the state to construct the Bates statue, can begin to design the full-size scale model.

"The architect of the Capitol was very complimentary, and Benjamin said he started to work on it today, so he's going to get that process going right now," Naumann said. "So I think we're well down the road with Daisy Bates."

Meanwhile, the state is still working out the details of the Cash model. Naumann said the state had received feedback from the architect of the Capitol regarding concerns about the neck of Cash's guitar, which he is portrayed carrying on his back, hanging downward within reach of visitors.

Naumann said the chosen artist for Cash's statue, Kevin Kresse, has been in contact with the national architect about doing some slight revisions to the model.

For both statues, the state must gain approval of a full-size clay model and pedestal design, then approval of a completed statue, according to the steps listed on the architect of the Capitol's website.

Arkansas is one of several states that is in the process of replacing the statues that represent it in the U.S. Capitol, which Congress invited all the states to do in 1864. The state is changing out its statues of late attorney Uriah Rose and late U.S. Sen. and Gov. James P. Clarke under Arkansas' Act 1068 of 2019.