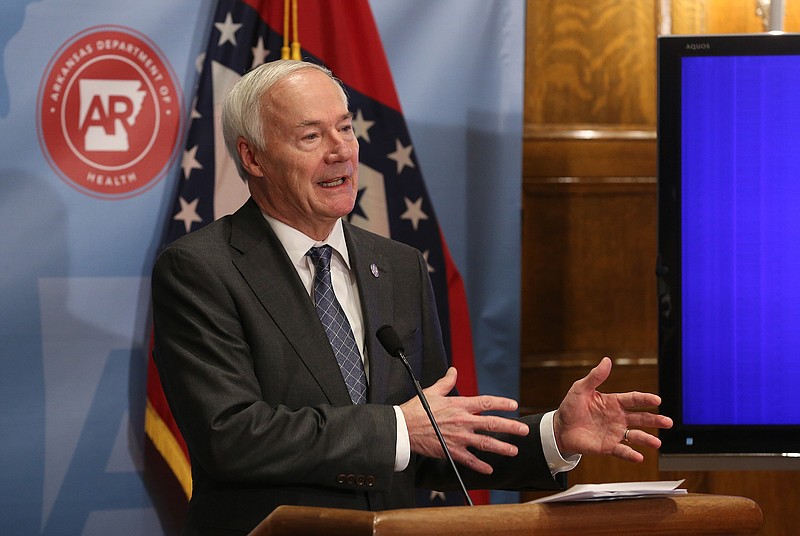 The surge in coronavirus cases in Arkansas continued on Tuesday, with the state's case count rising by more than 7,700 and the number hospitalized with the virus topping 1,100 for the first time since September.

The state's death toll from the virus, as tracked by the Department of Health, rose by 25, to 9,358.

At his weekly news conference at the state Capitol, Gov. Asa Hutchinson urged people to get vaccinated, "tested as needed and take the precautions that your particular situation dictates."

But he said it's important that schools continue to offer in-person instruction, and that families with unvaccinated children shouldn't have to "shelter in place."

"You can’t be calling for suspension of public interactions. That’s not where we are in our society today, and that's not what we need to do to get through this."

He said the omicron variant is "raging across Arkansas, but what we see from the data internationally and nationally is that this will pass through."

"We’re anxious for that to happen, but we've got to hold the line. We’ve got to make sure we take the actions so we can get through January into February where we expect to see this variant diminish signficantly just like it has in other countries."

Arkansas' count of cases rose Tuesday by 7,756, which was larger by almost 1,200 than the increase the previous Tuesday.

At a record level since Jan. 2, the average daily increase over a rolling seven-day period rose to 6,956.

With new cases continuing to outpace recoveries and deaths, the number of cases in the state that were considered active reached an all-time high for the eighth day in a row as it rose by 3,613, to 64,735.

Rising by double-digits for the 12th day in a row, the number of people hospitalized in the state with covid-19 jumped by 80, to 1,148, its highest level since Sept. 10.

The number of the state's virus patients who were on ventilators rose by 16, to 163, its highest level since Oct. 13.

The number who were in intensive care rose by 35, to 339, the largest number since Oct. 3.

The Health Department has purchased 1.5 million of the iHealth tests using $10 million in grant money from the U.S. Centers for Disease Control and Prevention.

Hutchinson said the first shipment of 211,000 tests arrived Monday, and 393,000 were expected to arrive Tuesday evening.

The Health Department posted a map of locations were the tests can be picked up at healthy.arkansas.gov/programs-services/topics/covid-19-guidance-for-at-home-testing.

People are limiting to picking up two tests per day for an individual or six per day for a family. The tests come in boxes of two.

[Video not showing up above? Click here to watch » youtube.com/watch?v=V-kWQWZS1ug]