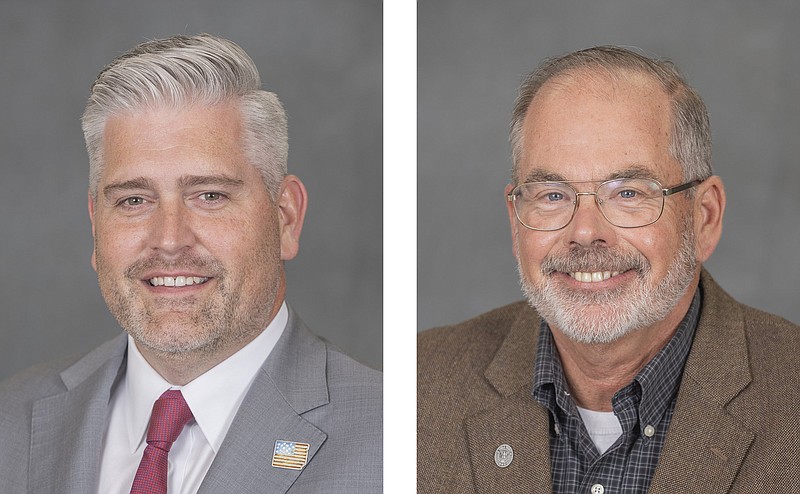 Colby Fulfer (left) and Steve Unger are the Republican candidates in the runoff for state Senate District 7.

Voters go to the polls today to choose the Republican candidate for the special election for state Senate District 7.

Colby Fulfer and Steve Unger, both of Springdale, face each other in a runoff. Neither garnered a majority of the votes in the four-man Republican primary Dec. 14.

Fulfer is chief of staff for the city and a former City Council member. Unger is a retired Navy captain in his first political race.

The winner will face Democrat Lisa Parks in the special election Feb. 8.

There were 107 votes cast during the early voting period that ran for a week starting Jan. 4, according to Jennifer Price, Washington County elections director.

Fulfer and Unger are vying for the seat left open by state Sen. Lance Eads, who resigned Oct. 28 to work for a lobbying firm.

The Arkansas Constitution requires the governor to call a special election to fill legislative vacancies. Gov. Asa Hutchinson picked the dates for the primaries, the runoff and the special election.

The existing boundaries of Senate District 7 include most of Springdale and Johnson plus southern Tontitown, all of Goshen and Elkins and eastern bits of Fayetteville. The district stretches to the eastern border of Washington County and touches both the southern and northern county lines.

The state has 35 Senate districts. State senators serve a four-year term and receive a base salary of $42,428. They also receive per diem and reimbursement for expenses.