Sen. Garner decides against reelection, while other Senate seats draw interest from Democrats 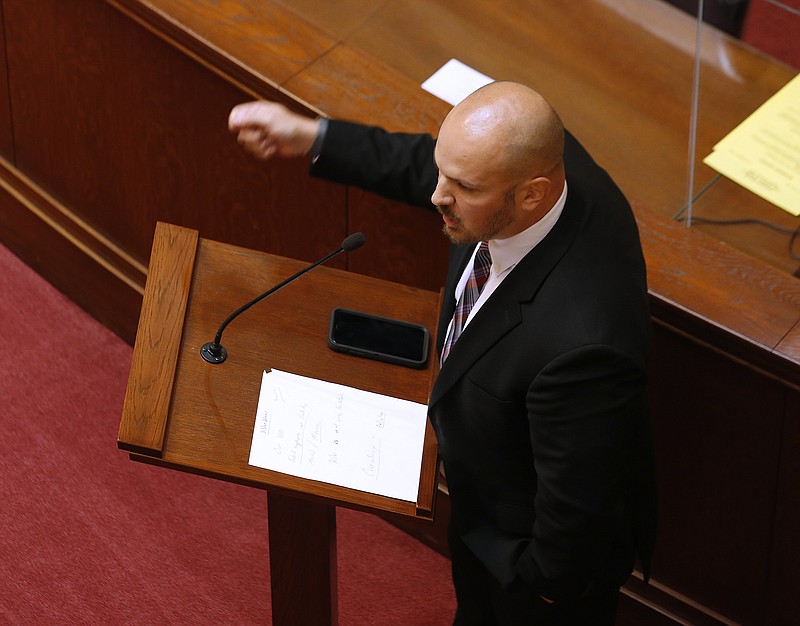 State Sen. Trent Garner, who has served in that body since 2017 and emerged as an outspoken critic of Gov. Asa Hutchinson, announced Monday that he isn't seeking re-election this year, saying it is time for him to serve the people of south Arkansas in a different role.

The El Dorado Republican said he is going to focus on building his legal practice and help the people of south Arkansas "reform the judiciary." Garner also said he is open to considering other employment opportunities if they arise.

Garner said he supports Matt Stone of Camden, his father-in-law, for the new Senate District 2 seat. Stone also is a Republican.

Senate District 2, under the redistricting plan approved in 2021, includes Calhoun, Dallas, Ouachita and Union counties and part of Grant County.

Meanwhile, state Rep. Reginald Murdock, D-Marianna, on Monday announced his bid for the Senate District 9 seat for which Senate Democratic leader Keith Ingram of West Memphis said Friday he is not seeking reelection to this year.

Murdock, who has served in the state House of Representatives since 2011, said in a written statement that many citizens who live in Senate District 9 and others who don't have reached out to encourage him to continue his service to the state as a senator.

"Over last several months, I have grown tired of hearing that our state senator only cares about voters who voted for him in the last race, especially given he did not have a challenger in the general election," Summers said in a news release. "He has made it clear he represents a loud and vocal minority of extremists."

In response, Sullivan said in a written statement that he is proud of his record and "we fully expect to defend that to District 20 voters.

"We have begun preparing for the upcoming ... elections and will leave no stone unturned," he said.

Garner, who is a former aide to Republican U.S. Tom Cotton of Little Rock and served two tours in Afghanistan with the U.S. Army Special Forces, said in a written statement that serving the people of south Arkansas has been one of his greatest honors and "we have made great strides on making our state a better place to live and raise our families."

He said he spoke out against "career politicians" when he first ran for the state Senate in 2016. That year, he ousted Democratic state Sen. Bobby Pierce of Sheridan.

"After seeing how the people's business is done in Little Rock the last few years, I believe stronger than ever a true public servant should be careful about how much time they spend in power," Garner said.

"I've seen firsthand from Governor [Asa] Hutchinson, a career politician who has spent decades in office, how those who stay in office too long end up violating conservative principles for power," he said in a written statement.

In response, Hutchinson said in a written statement, "After having a very fulfilling career of practicing law for 25 years, I know Sen. Trent Garner is going to enjoy himself and I wish him well."

Hutchinson has been governor since 2015 and has served stints as the state's 3rd District congressman, U.S. attorney, U.S. Department of Homeland Security undersecretary and administrator of the U.S. Drug Enforcement Administration.

Garner said one of the lessons that he learned during the covid-19 pandemic is that "we need to have conservative leaders fighting for the people in our court system.

"It was conservative Attorney Generals, not the Arkansas State Senate, who protected the people of Arkansas from President [Joe] Biden's dangerous vaccine mandates in court," Garner said.

Garner said, "It was an activist judge in Little Rock who overturned the will of thousands of parents on mask mandates, risking the safety of our children."

Act 1002 of 2021 -- sponsored by Garner -- prohibited state and local governments, including public school districts, from mandating that individuals wear masks during the coronavirus pandemic.

Fox said that the act, among other things, violates the separation of powers clause by attempting to usurp the constitutional authority of county judges and the Arkansas Supreme Court, and violates the equal protection provisions of the Arkansas Constitution by discriminating between minors in public and private schools.

Garner said, "Now more than ever, we need strong leadership in our legal system.

"I plan on providing that leadership for the people of South Arkansas," he said.

"His work ethic is unquestionable, and I have no doubt he will be successful in whatever he decides to pursue," he said in a written statement.

Senate President Pro Tempore Jimmy Hickey, R-Texarkana, said Garner's plan not to seek reelection "is not a decision I enjoy.

"He is a young man with much spit and vigor who enjoys a heightened legislative arena," Hickey said in a written statement. "He has obviously caused me more than a few gray hairs. However, he has always kept our lines of communication open and Senator Garner is highly effective at reading and comprehending potential legislation. I wish the very best for my friend."

Sen. Kim Hammer, R-Benton, said in a written statement that he understands that Garner is not seeking reelection "because he has an opportunity that is too good to pass up. If that is the case, I wish him the best and thank him for his service to the state as a senator."

The Senate is composed of 26 Republicans, seven Democrats and an independent with one seat vacant due to the resignation of Sen. Lance Eads, R-Springdale, in October.

The 2022 primary election is set for May 24 and the general election will be held Nov. 8.