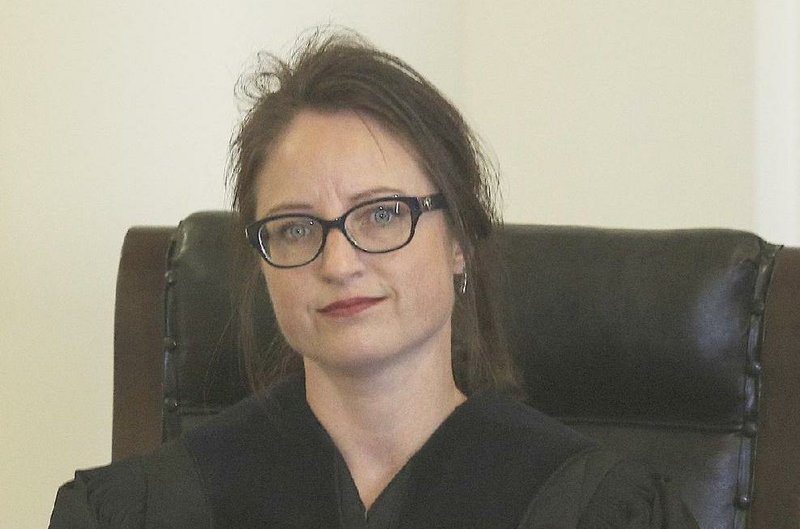 An ethics complaint has been filed against Arkansas Supreme Court Justice Rhonda Wood for, among other things, asking an embattled candidate for an appeals court judgeship to delete text messages to and from her in 2014.

Wood was serving as a judge on the Arkansas Court of Appeals and running for the Supreme Court that year.

Michael Maggio, a Faulkner County circuit judge, was running for a seat on the state appeals court. He withdrew from the race in March 2014 after a scandal about his anonymous social media posts pertaining to women, homosexuals, bestiality, incest and an adoption case involving the actress Charlize Theron.

The nonprofit Arkansas Public Law Center filed the complaint against Wood on Dec. 24 with the Arkansas Judicial Discipline and Disability Commission saying her actions "reflected adversely on her honesty or fitness to serve as a judge" and "undermined the integrity of the judiciary."

David J. Sachar, executive director of the commission, said its rules prevent him from confirming receipt of a complaint, except in special circumstances. He said investigations of complaints can take anywhere from two months to over a year.

"Pursuant to [Commission] Rule 8C, all complaints that are not summarily dismissed for lack of jurisdiction are sent to an Investigation Panel," Sachar said in an email.

The commission received 226 complaints in 2020 and sanctioned one judge that year. In other recent years, the number sanctioned has been as high as seven.

Robert Coon, a spokesperson for Wood's reelection campaign, said the complaint was frivolous and "a political hit job."

Judicial races in Arkansas are ostensibly nonpartisan under Arkansas Code 7-10-102.

Ernie Dumas, a member of the law center's board, said the complaint stems from testimony during last summer's bribery trial of Gilbert Baker, a former state senator, lobbyist and chairman of the Arkansas Republican Party.

Baker was acquitted of conspiracy to commit bribery. The jury deadlocked on another eight charges. A retrial on those charges is scheduled for May 16 in U.S. District Court in Little Rock.

Dumas said he and others closely followed coverage of the Baker trial in the Arkansas Democrat-Gazette.

"A couple of lawyers ... were alarmed by what they read in the paper" regarding Wood's testimony as a witness at the trial, said Dumas.

Baker, Maggio and Wood are all from Conway.

While running for office, sometimes they would travel together to campaign events, according to Wood's testimony in Baker's trial. Maggio would joke that he was her campaign driver.

During the same trial, however, Maggio testified that Wood did ask him to delete texts to and from Baker, and he followed her advice.

On March 3, 2014, Blue Hog Report, a liberal blog, ran an article about comments Maggio had posted on tigerdroppings.com, a Louisiana State University sports fan website with public forums. That same day, Sachar confirmed that Maggio was under investigation regarding those posts.

On March 6, 2014, Maggio withdrew from the appeals court race.

On March 11, 2014, Blue Hog Report broke the story that Maggio had lowered a jury award from $5.2 million to $1 million after receiving donations from political action committees associated with Michael Morton of Fort Smith and his nursing homes.

The case involved the April 7, 2008, death of Martha Bull. She died two weeks after being admitted for a one-month rehabilitation stint at Greenbrier Nursing and Rehabilitation Center, which is owned by Morton.

On March 13, 2014, Bull's family filed a complaint asking the Judicial Discipline & Disability Commission to look into Maggio's actions regarding the case.

Eventually, Maggio pleaded guilty to bribery in 2015 and was sentenced to 10 years in prison, but he was released early.

Morton hasn't been charged with any crimes and has denied any wrongdoing in the matter.

Baker was accused of acting as a middleman to bribe Maggio to reduce the jury award in the Bull case.

In response to a reporter's question, Coon said, "Justice Wood was disturbed by the inappropriate and offensive comments Mike Maggio made online, which is why she asked Maggio to delete their personal correspondence and sever communication with her. Sworn testimony confirms that her request was solely in regards to Maggio's decision to withdraw from the Court of Appeals race and not any other reason. Any allegations suggesting there were other reasons for that request are demonstrably false."

In addition to other allegations, the complaint concerns post-dated campaign checks.

Wood's campaign received 24 checks in 2013 from Morton and his nursing homes.

The checks -- for $2,000 each -- came through Baker, who was helping raise funds for Wood's campaign.

According to Rule 4.4 of the Arkansas Code of Judicial Conduct, "A judicial candidate subject to public election shall direct his or her campaign committee ... not to solicit or accept contributions for a candidate's current campaign more than 180 days before the applicable election, nor more than 45 days after the last election in which the candidate participated."

According to the complaint, during the Baker trial, Wood conceded that she "took no steps" to ascertain why the dates had been changed on the checks.

Wood testified that her father, who was her campaign treasurer, collected the checks in a basket at a fundraiser around Nov. 22, 2013.

Wood testified that she didn't know the dates had been changed until she saw the checks later in the FBI's office.