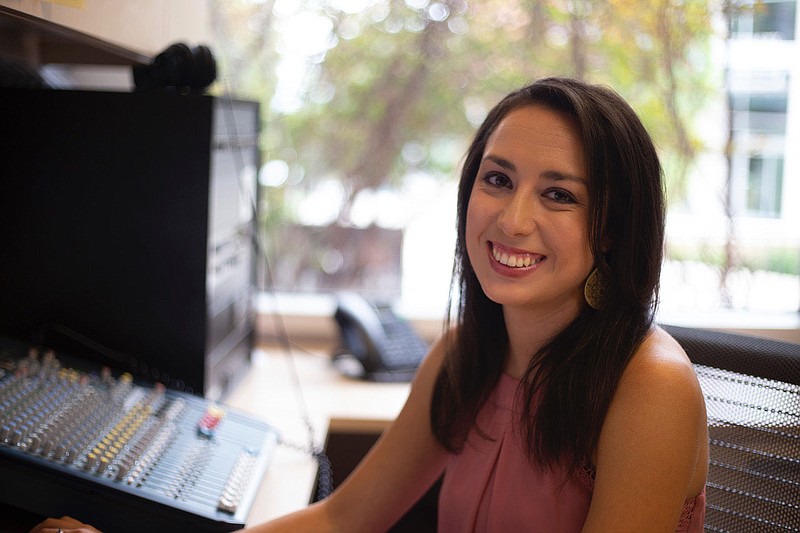 “Someone once told me if they’re not going to create space for us, we have to create it ourselves. That’s how I see Arkansas Soul,” Antoinette Grajeda says. “We’re not only creating a space where Arkansans of color can see themselves represented in a variety of ways, but also a safe place where BIPOC journalists can work on their craft. Negative experiences can prompt journalists of color to leave the industry altogether, and they’re taking valuable insight of their communities with them. It’s been said journalists write the first draft of history. If we aren’t including everyone in the narrative of our state, are we really writing a true history?” (Courtesy Photo)

Find out more about Arkansas Soul at https://argotsoul.com/

"I recently learned my maternal great-grandmother wanted to be a journalist, but became a teacher instead," Antoinette Grajeda reveals. "She died before I was born, but I think she'd be pleased. I'm grateful women have more career choices than in her era, but there's still a long way to go in achieving equity in the workplace."

Grajeda, armed with bachelor's and master's degrees in journalism from the University of Arkansas, is the first paid employee of Arkansas Soul, which she describes as "a statewide nonprofit media organization creating content by, for and about BIPOC (Black, Indigenous and People of Color) Arkansans."

"Our goal is to amplify the voices of communities of color so that not only are they included in the narrative of our state, but their stories are told in an authentic way," Grajeda explains. "We also want to help build a pipeline for young journalists of color."

Grajeda, well known as a reporter for the region's NPR affiliate, changed jobs in August to become editor-in-chief for what began in 2019 as a travel writing camp organized by the University of Arkansas School of Journalism and Strategic Media, she explains.

"Assistant professor Niketa Reed launched the initiative as a way to connect with high school students of color," Grajeda explains. "The program prompted discussions about the need for a media outlet for journalists of color. I created the Affirmative Action podcast as a freelancer in the summer of 2020 and by the end of the year, we were officially a nonprofit. In January 2021, I began producing regular content on weekdays in a part-time capacity. In August 2021, I became our only paid, full-time employee."

In the past few months, "the biggest steps we've taken have been producing regular content and making connections with people and organizations around the state," she goes on. "We're here to serve communities of color, but it's difficult to be an effective resource if people don't know you exist. In 2022, we plan to continue expanding our networks and connecting with new communities and groups in Arkansas. We're also focusing on fundraising efforts so we can expand our staff."

"How would you feel reading or watching local news and never seeing someone who looks like you? What if the only time you saw your community reflected was during a crime story? If you feel like traditional media does not value the stories of your community or cannot tell them in an authentic way, are you going to support it? Probably not.

"From a journalistic standpoint, that's problematic because our job is to educate the public," she elaborates. "How can you inform people if they've stopped paying attention because the message they've taken from your reporting is that they don't matter?"

Grajeda says growing up in Northwest Arkansas gave her a biracial perspective.

"My father is Mexican and my mother is white, so there's long been a struggle of where I fit," she says. "Latinos don't always accept me because I was born in the U.S. or because I'm not fluent in Spanish. On the flip side, I have found myself in situations where white people only embrace my latinidad when they need to check a diversity box. I've also been in uncomfortable situations where people say racist things in front of me not realizing I'm Mexican.

"I have found myself in spaces during my career where I'm the only person of color in the room so I felt it important to speak up when an institution's work could be problematic to communities of color," she adds. "Unfortunately, my perspective and lived experience were often ignored or dismissed. I've also had people approach me for projects solely for my ethnicity because they had been criticized for a lack of diversity. It's exhausting and disheartening to use my heritage to your advantage simply when it's convenient. We are more than our ethnicity and to only use that piece of our identity when it suits you is insulting.

"Creating true diversity, equity and inclusion requires an openness to being wrong and a willingness to accept ideas that aren't your own.