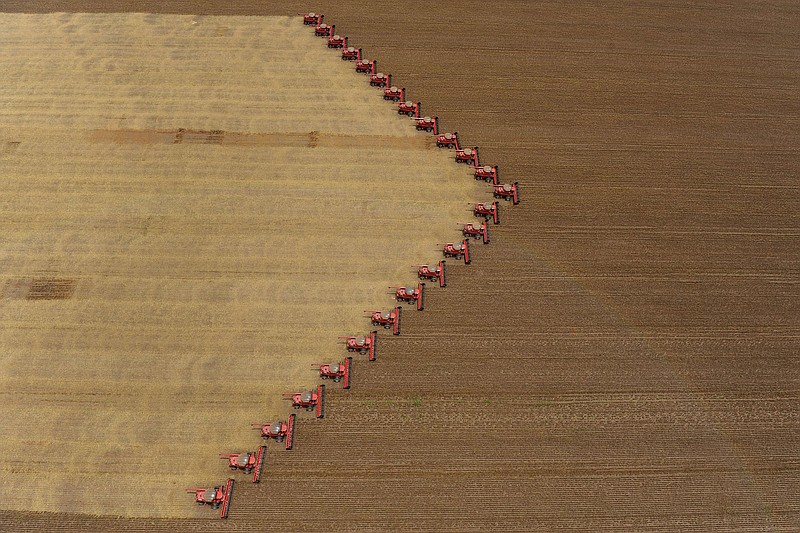 Soybeans are harvested from a field in Campo Novo do Parecis, in Mato Grosso state, Brazil, in this file photo. (AP)

The world's largest soybean producer and exporter will fail to deliver a record crop this year.

Crop forecasters have slashed their estimates for Brazil's soy output as persistent drought and heat caused losses in the nation's south. Production is now seen below last year's level, when the South American nation reaped 137.3 million tons. The harvest could have reached as much as 145 million tons this season, according to initial forecasts.

A tighter supply of the oilseed used to make everything from cooking oil to animal feed may add fuel to global food inflation. Concerns over the South America crop have caused a rally in Chicago, with soybean futures rising 13% since December. Brazil's lower production is also likely to curb its shipments and may increase the competitiveness of U.S. exports.

Heat and dry conditions were intense in December in Brazil's south, a region accounting for about a third of the nation's crop. That led brokerage StoneX to cut its production estimate by 7.7% to 134 million tons earlier this week. On Thursday, the local consultancy AgRural said output may be even lower at 133.4 million tons. While losses in Parana are consolidated as the crop is at a more advanced stage, yields in Rio Grande do Sul, which has a late planting, also had a big cut as adverse weather shortened the plant cycle in several areas, it said.

"Rain and lower temperatures are necessary right away to avoid more losses in the state," AgRural added in its report. In other regions, the crop is developing well and high yields are expected in the top-growing state Mato Grosso, where reaping has started.

Lack of rain and extreme heat in southern Brazil are conditions caused by the La Nina phenomenon, which is hitting the nation's agriculture for the second year in a row. Argentina, also a major supplier of the oilseed, faces a similar weather pattern, with moisture deficits reaching at least 75% of the nation's soy next week, according to the Commodity Weather Group.

The reviews made this week on Brazil's crop estimates may signal official cuts next week, when the U.S. Department of Agriculture and Brazil's Conab are scheduled to release forecasts for the nation's crop.