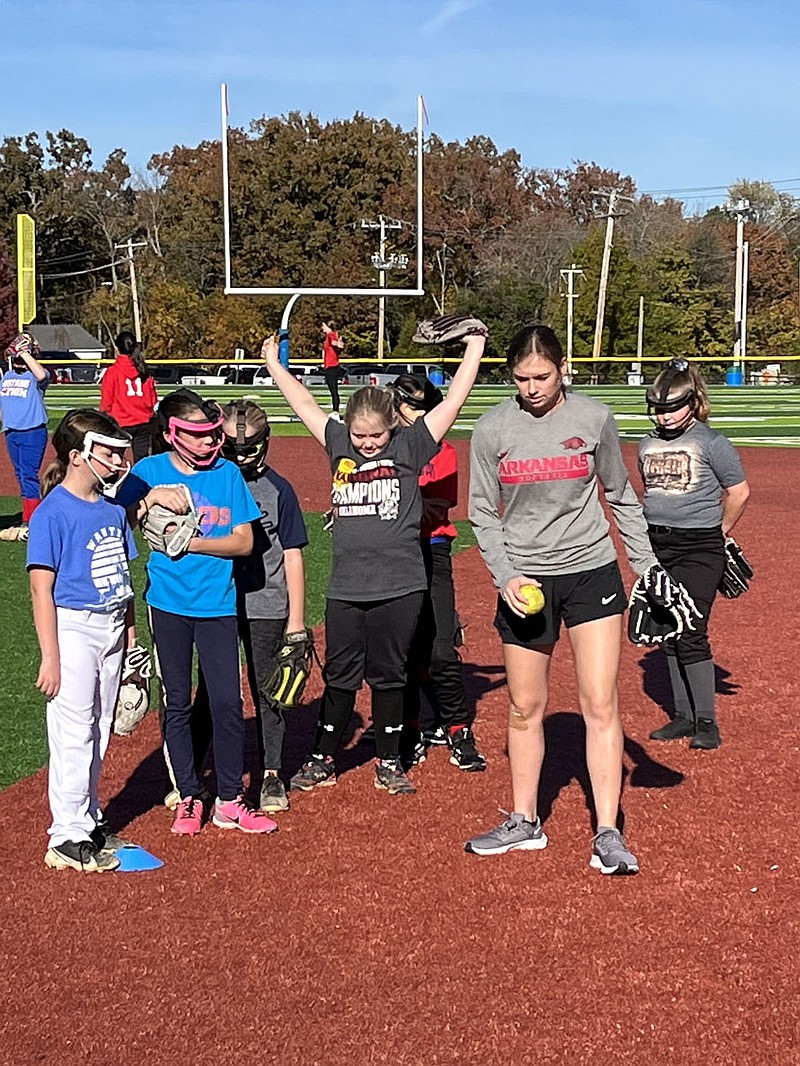 Current Arkansas Razorback softball player Ally Sockey demonstrates for youngsters at a recent youth clinic at Hunts Park in Fort Smith. The clinic is sponsored by Fort Smith Youth Baseball and Softball, a group that now oversees youth baseball and softball leagues in the city. Photo by Shea Hamilton

FORT SMITH -- The caretakers of youth baseball in Fort Smith may have recently changed, but the hope is to continue to grow the sport in the area and add softball, too.

That's a message Bill Kincannon, who grew up playing in the city as a youngster, wants to convey as the group called Fort Smith Youth Baseball and Softball will now take over management of the leagues at Kelley Park.

The Fort Smith board of directors recently selected the group, ending a 10-year lease with Fort Smith Church League and more than 60 years of their stamp on youth baseball in the city. The board agreed to a three-year lease with the option of two, one-year extensions.

"This kind of program needs to have new eyes and ears," said Kincannon, the chairman of the group's nine-member board. "It needs to be fresh. It needs to run parallel with where the game's going. It needs to see everybody's best practices.

"The group that we put together has so much profound knowledge and experience in all aspects of baseball and softball. From the playing to the teaching, the instruction, the coaching, the organization, I mean it just all fell into place."

He also tried to make sure each board member brought a different skillset to add to the overall product, whether that was coaching, officiating or other organizational aspects.

Kincannon pointed to factors like more overall instruction and not just for players, but also coaches and umpires that his group will work on. Another huge point was inclusion for more of the population of the city and specifically adding softball.

There were 75 teams involving around 800 players from ages 4-15 last season, according to Brent Lewis, who served on the Church League board and is now part of the new group. That's still quite a change from when it began with just four teams in 1955 as an extension of the First Methodist Church youth program, according to the Church League website.

But there's room for improvement to the current system and they have already started to implement a few changes to try to help the sport grow.

"We're in unison with what we want," said Kincannon, who has extensive experience with youth baseball as a coach. "And that's inclusion of everyone in the city of Fort Smith and surrounding area to be able to have the same opportunities and it hasn't been that way all the time."

The Fort Smith Christian graduate, who still has relatives that live in Van Buren, would go on to play college baseball at Arkansas-Fort Smith and for the Razorbacks before playing parts of 10 seasons in the big leagues for four different teams.

But before all that, he donned the uniform of St. Boniface Catholic Church among others from ages 10-to-15 as a standout at the Kelley Park fields. Those formative years in the mid-1990s were special, Gentry said.

"It was a great experience for me," said Gentry, who now lives in Texas. "To be honest, that was probably the most competitive league in the area. Guys who really play competitive baseball ended up going to the church league."

He was part of a Church League All-Star team that won the state tournament and competed in a regional in Texas at age 15. That experience of getting to face some outstanding competition and doing well was a definite springboard, he said.

"Going down there and playing really well was a big confidence booster for me," Gentry said. "Getting to compete at a high level like that really helped me grow."

Kincannon and his group are hoping to see these city leagues that have lost numbers like many across the country to more travel teams make a positive turn.

Off to a Good Start

The instructional clinics have already been a success, Kincannon said.

The first softball clinic for ages 5-12 brought out around 80 youngsters, while nearly 150 showed up for the baseball clinic a week later, he said.

"We had 25 instructors at the softball one, and those are area college and high school players who are doing their part to give back along with coaches," Kincannon said. "We had over 40 instructors in the second one.

Board member Shea Hamilton said it was fun seeing the reaction the youngsters had when they were told Arkansas softball player Ally Sockey of Greenwood would be giving them instruction.

"It's really something to see their eyes light up when you tell them with have a Razorback here," Hamilton said. "And softball is a huge component of this as well."

He said there's not much rec league softball leagues in the city.

"Most of the softball in our area is played at Ben Geren Park, which is a county park," Hamilton said.

On the baseball side, the group has also partnered with Fort Smith Boys and Girls Club and the Fort Smith Fall Baseball League, he added.

That's just in an effort to get more people involved, Hamilton said.

"Not that the church league didn't try, but we're reaching out to more areas of the city who haven't played out there," he said. "We'll have a scholarship fund for kids who might not afford it. And we'll try to use vans from the boys and girls club to transport kids to and from practice when we can."

Kincannon said former Fayetteville High School standout Cody Davenport, who went on to play baseball at Central Arkansas, told him he and a group of his friends growing up had the best of both worlds playing in the local baseball league during the week and then hit the travel circuit on the weekends.

"He said 'We all knew we needed to play in the city league during the week and have fun competing against each other, then on the weekend we were teammates,'" Kincannon said.

Another difference the new group wants to implement is a draft system for each team in the leagues, which should help the overall competitiveness.

In the church league, some of the same teams would dominate throughout the age groups year after year.

Lewis acknowledged he thought it was beneficial in the fall league where he coached a team.

"Ours is very structured and teams changed every year," Lewis said. "We've had great success with that. The fall league's grown from about 200 kids to around 400 in the last six years.

"There's no question in rec league baseball, a lotta the talent is gone. It goes to travel ball. What talent there is there need to spread out. ... you need to give a reason for some of these travel ball kids to play in the rec league. With a son who does some of both, I saw both sides of it." 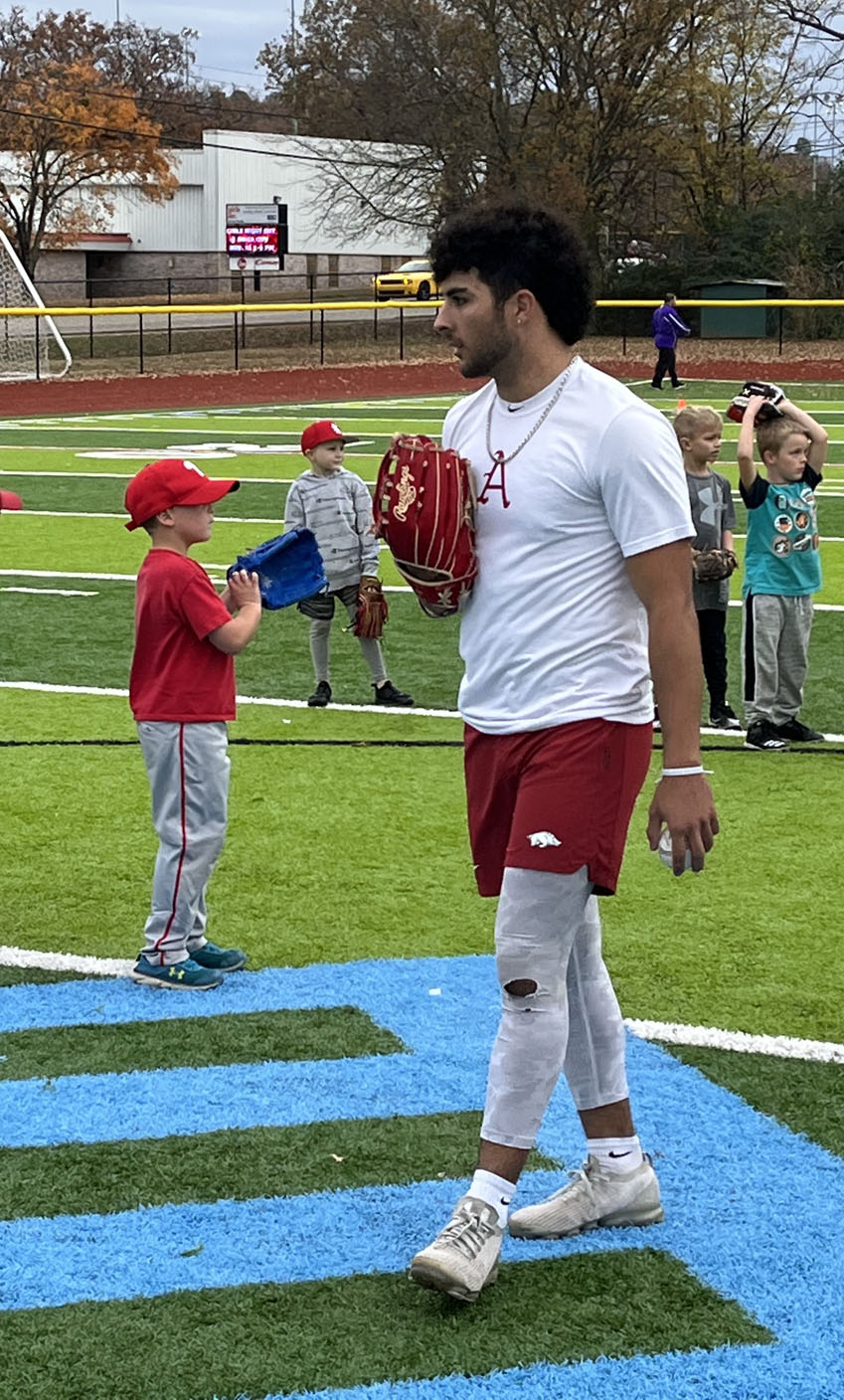 Current Arkansas Razorback baseball player works with youngsters at a recent clinic at Hunts Park in Fort Smith. The clinic was sponsored by Fort Smith Youth Baseball and Softball, which now oversees youth leagues in the city. Photo by Shea Hamilton
More News