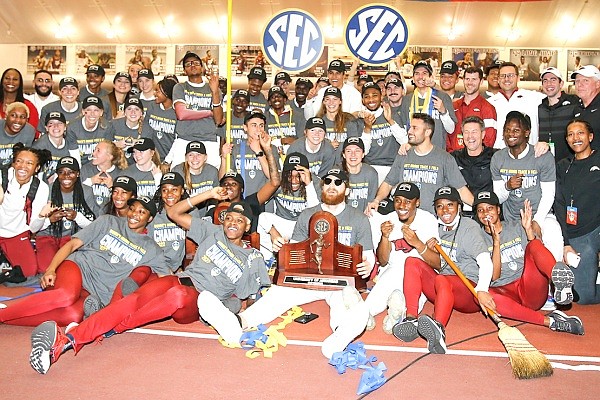 FAYETTEVILLE -- The University of Arkansas men's and women's track and field teams posed for a photo together Saturday night at the SEC Indoor Championships in College Station, Texas.

The Razorbacks wore championship hats and t-shirts along with their smiles.

Morgan Burks-Magee, a sprinter for the women's team, had a broom -- for the Arkansas sweep.

For the 34th time since Arkansas joined the SEC for the 1991-92 school year, the men's and women's teams swept titles at the same conference cross country and indoor and outdoor track and field meets.

"That photo after the meet with our teams together, it was very spontaneous," Arkansas women's Coach Lance Harter said. "The kids were so sky high, and there was lots of positive energy with everyone supporting each other.

"The feeling was, 'Hey, we are Arkansas.' It was really cool."

Chris Bucknam, the Razorbacks' men's coach, said the coaching staffs -- including assistants Doug Case and Travis Geopfert for the men and Chris Johnson and Bryan Compton for the women -- have a strong respect for each other and a camaraderie that the athletes embrace as well.

"We're equally proud of the women's program and how well they do, and I think the feeling is mutual," Bucknam said. "There's a lot of cooperation and goodwill between our coaches.

"We genuinely want success for each other."

Both Arkansas teams came from behind to overtake Florida in the final three events to sweep the team titles.

The No. 1-ranked Arkansas men's team won its third consecutive SEC indoor title and 25th overall with 86 points. Florida was second with 77.

Arkansas' No. 3 women's team won its eighth consecutive SEC indoor title and 12th overall with 127.5 points with Florida second with 97.

It also was the Razorbacks' women's team 22nd conference title in the last 23 SEC cross country and indoor and outdoor track and field meets.

"Both of our teams had to rally," Arkansas Athletic Director Hunter Yurachek said. "I think they get their energy from each other, because they're competitors and they see the success one team is having, and they want to go out for their next event and have that same level of success."

Harter said both teams always are supportive of each other.

"We're each other's greatest cheerleaders," Harter said. "Anything with a Razorback attached to it is positive reinforcement.

"During a meet we might have our pole vaulters competing, and a male runner goes by on the track during his race, and they're cheering for him.

"It's a united front. No doubt about it."

Nine men's and nine women's SEC track and field teams are ranked among the top 25 nationally.

"We're in the top track and field conference for both men and women and the other teams we compete against have great coaches and great athletes and great resources," Yurachek said. "That's what makes it so incredible what our teams continue to do in winning so many championships."

Bucknam and Harter expressed their thanks to Yurachek for helping arrange for another plane to take the teams to College Station on Thursday night after the charter they had scheduled to fly from Fayetteville on Wednesday morning was canceled because of the ice storm that hit the area.

The Razorbacks got to their hotel in College Station about 9 p.m. Thursday with the meet starting the next day.

"The kids were so resilient," Harter said. "[Arriving later than planned] was never really even a concern. It was just like, 'We're here. Let's go compete.' "

Bucknam said ideally the Razorbacks would have been able to work out at Texas A&M's Gilliam Indoor Track Center on Wednesday and Thursday but instead the teams practiced at home.

"To get to a championship event the night before the meet and not be able to practice at the facility where you'll be competing, that's not normal," Bucknam said. "But the kids never said a word about it. We just did what we had to do."

Yurachek, hired from Houston in December 2017, said Arkansas is the only athletic department he knows of that has separate coaching staffs for men's and women's cross country and track and field.

While the coaching staffs are separate, the programs work well together.

"Our offices and locker rooms are side by side," Bucknam said. "We share the same lounge and training room. We share the indoor and outdoor tracks, the weight rooms.

"There's an energy and a vibe here that's unlike a lot of other SEC schools."

Yurachek said after he met with Bucknam and Harter and studied their history of winning championships, maintaining coaching staffs for each program was an easy call.

"What I determined in the end was, 'Why am I going to mess with something that's working so well?" Yurachek said. "Both teams are winning championships year in and year out. We want that to continue."