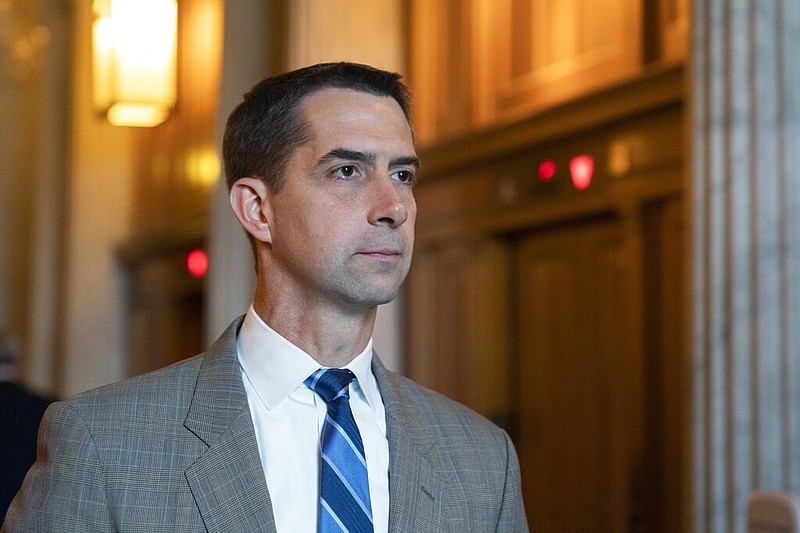 U.S. Sen. Tom Cotton said Arkansans should brace for an increase in gas prices as fallout from the crisis in Ukraine continues.

Cotton, along with U.S. Sen. John Boozman, spoke to reporters about the situation in Ukraine after an event with health care leaders in Little Rock on Wednesday. Both Republican senators are pressing for more sanctions against Russia after Russian President Vladimir Putin ordered troops into eastern Ukraine.

Although sanctions are likely to increase prices at home, most Arkansans will support the effort to punish Russia for a "naked, unprovoked aggression by Vladimir Putin against a smaller country," Cotton said.

"This is probably going to drive up the price of oil in international markets, which means they will be paying more at the pump," Cotton said.

Cotton said the crisis in Ukraine will also likely hurt farmers in Arkansas. Ukraine is a major agricultural exporter.

"Which means our farmers may have more export opportunities, but unfortunately they're going to be paying higher input costs for things like fertilizer," Cotton said. "And most Arkansans are going to continue to pay higher costs for groceries."

On Monday, Putin said Russia will recognize the independence of Donetsk and Luhansk, two breakaway areas of eastern Ukraine. He followed the speech by announcing that Russian troops would move into eastern Ukraine, prompting a tranche of sanctions from the United States.

At the White House on Tuesday, President Joe Biden announced that the U.S. will sanction Russian banks and sovereign debt. Biden also said he would target some of Russia's ultra-wealthy elite who "share in the corrupt gains of the Kremlin policies."

Boozman said the U.S. should impose travel restrictions for members of the Russian elite and cut off Russia's access to U.S. technology. Cotton said, European countries would need to take the lead in sanctioning Russia's elite, as many wealthy Russians live and own property in Europe.

"These people are very wealthy, they like to get out and flaunt their riches and this and that," Boozman said. "So we can make that difficult. That's really where we hurt them individually."

Cotton said the new sanctions Biden announced Tuesday were "a step in the right direction" but more should come, specifically against Russia's oil, gas and mineral industries "which is providing critical revenues to the Russian state."

Boozman said he expects Congress to pass "some really stringent sanctions" against Russia after lawmakers return to Washington next week. What sanctions Congress may approve will depend on what actions Biden takes in the coming days, Cotton said.

Boozman and Cotton have criticized the Biden administration for not implementing sanctions against Russia sooner as the country amassed troops on Ukraine's border. Last week, despite some bipartisan support, Congress did not agree to a sanctions package against Russia. Instead, Congress approved a non-binding resolution condemning Putin.