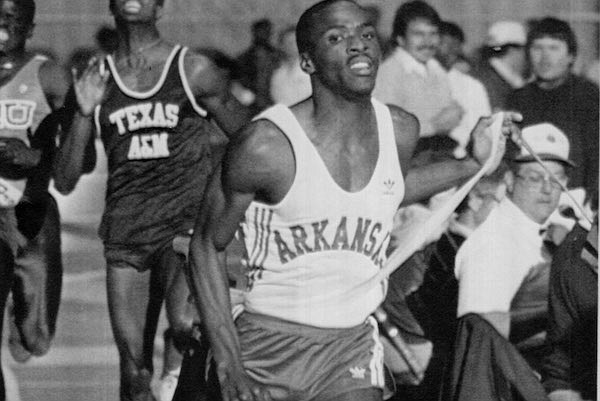 Arkansas sprinter Roddie Haley is shown during the 1985 SWC Indoor Championships in Fort Worth, Texas.

Haley, 57, had been suffering from health issues in recent years.

Competing for the Razorbacks from 1985-87, Haley was a three-time NCAA champion, a nine-time All-American and a seven-time Southwest Conference champion.

Haley helped Arkansas win its first national triple crown -- symbolic of titles in cross country and indoor and outdoor track and field -- in 1985.

Bill Jasinski, an All-America high jumper for the Razorbacks, recalled being inspired to leap a career-best 7 feet, 6 inches to take third at the NCAA Outdoor meet after watching Haley win the 400 in 44.70 at Memorial Stadium in Austin, Texas.

"The best story I've got about Roddie is from 1985 when he won the 400 right before I jumped 7-6," Jasinski said Friday. "He really fired me up. It was the highest bar I ever cleared."

"Roddie was a fantastic runner," Jasinski said. "Just such a natural talent.

"He had an unusual approach to running the 400. Most guys will take off and get a good start, then they'll ease into the race a little bit, because you're going a full lap.

"But Roddie didn't run it like that. He'd take off as fast as he possibly could and he'd run until he couldn't run anymore. He basically said, 'Catch me,' and nobody could.

"He blew the field away at the NCAA meet. Nobody could reel him back in at the end of the race. It was pretty amazing."

"If he has one great quality, it's his competitive spirit," Arkansas Coach John McDonnell said after that race. "He's just a terrific athlete and a terrific competitor."

Haley was inducted into the UA Sports Hall of Honor in 2016. During his acceptance speech at the banquet, he recalled choosing to sign with Arkansas over Texas when McDonnell made a home visit.

"John said Fayetteville is a small town [like Texarkana], and you won't get lost like you would [in Austin]," Haley said. "He said, 'And you can be the missing piece to our puzzle to win a national championship outdoors.'

"My grandmother said, 'You're going to Fayetteville to be a Hog.' "

As a member of Arkansas' distance medley relay at the 1986 Penn Relays, Haley ran the 400 leg in 43.7 to help the Razorbacks win the event.

Mike Conley, a former Razorback who won nine NCAA titles in the long and triple jumps and the Olympic gold medal in the triple jump in 1992 and silver medal in 1984, ran on the NCAA champion 400 relay with Haley in 1985.

"Roddie had performed so well in Austin before [in high school state championships] that he was very comfortable running there for us," Conley said in 2020. "He was right at home. As a freshman, he was just so loose and confident."

A GoFundMe page has been set up to help pay for Haley's funeral costs. A visitation will be from 1 p.m.-5 p.m. next Saturday, Feb. 25, at Richardson Hill Funeral Home Chapel in Texarkana.