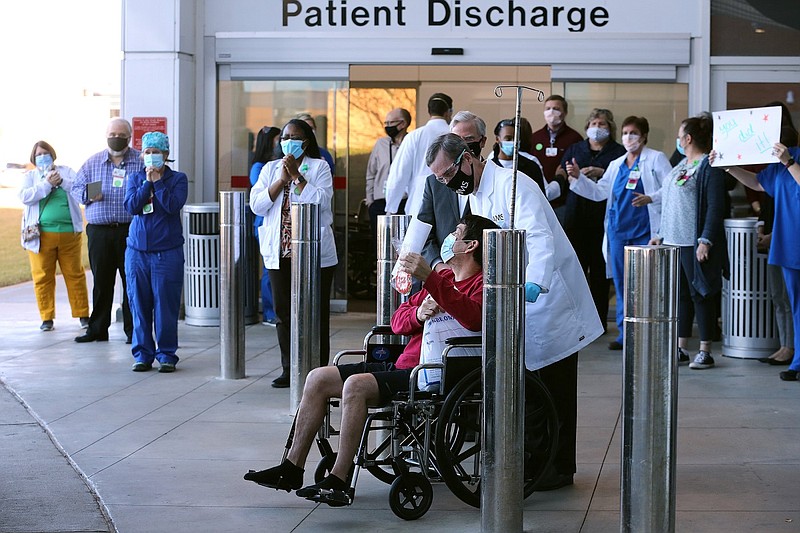 Michael Kent of Sherwood is wheeled out of University of Arkansas for Medical Sciences Medical Center in Little Rock by UAMS Chancellor Cam Patterson as he is applauded by employees and staff in this Jan. 4, 2021, file photo. Kent was the 1,000th covid-19 patient to be discharged from UAMS. (Arkansas Democrat-Gazette/Thomas Metthe)

A day after falling below 1,000 for the first time in more than a month, the number of covid-19 patients in Arkansas hospitals kept plummeting on Friday as the state's new case numbers also continued to decline.

Meanwhile, the state Department of Health was notified Friday of the state's fourth coronavirus case caused by the omicron subvariant BA.2, a department spokeswoman said.

Dropping for the 18th day in a row, the number hospitalized fell Friday by 66, to 865, its lowest level since Jan. 5 and less than half the all-time high it reached during the recent omicron surge.

The state's total count of cases rose Friday by 1,279, an increase that was larger by 130 than the one a day earlier but smaller by 668 than the one the previous Friday.

Already at its lowest level since the week ending Dec. 28, the average daily increase in the state's case count over a rolling seven-day period fell Friday to 1,258.

With recoveries and deaths outpacing new infections, the number of cases in the state that were considered active fell by 70, to 12,414.

Except for Jan. 29 and Jan. 30, when the Health Department didn't release numbers as it switched to a new data system, the active case total has fallen every day since it reached an all-time high of 102,576 on Jan. 22.

Health Department spokeswoman Katie White said one of the deaths reported Friday happened in December, and the rest occurred within the past month.

Already at its lowest level since Jan. 9, the number of the state's virus patients who were on ventilators fell Friday by four, to 138, its fourth straight daily decline.

BA.2 is sometimes called "stealth omicron" because of a genetic difference that makes it harder to track than the original strain, known as BA.1.

The state's first case of covid-19 caused by the subvariant was reported to the Health Department on Jan. 31.

Three more were reported this week, including one on Monday and one Wednesday.

The latest case, reported Friday, was identified through sequencing conducted by the molecular diagnostics laboratory at University of Arkansas for Medical Sciences Medical Center in Little Rock.

Dr. Susan Harley, an assistant professor at UAMS and section chief of the lab, said it started conducting sequencing for surveillance purposes on a specimens collected at the hospital, as well as from UAMS clinics around the state, about two weeks ago.

So far, about 270 specimens have been sequenced, she said.

"We're looking to see what variants the patient population has," Harley said.

"Our infectious-disease doctors are particularly interested in differentiating the omicron variant from the delta variant at this point for treatment purposes, but we're specifically looking at just identifying how the epidemiology of the virus is moving through our population."

She said the hospital acquired the sequencing equipment in November.

The laboratory, which also conducts testing used to tell if someone has covid-19, then had to validate the test used to determine which strain of the virus caused an infection.

In a report Tuesday, the World Health Organization said BA.2 appears to spread faster than BA.1 but didn't appear to be significantly better at evading the protection afforded by vaccines or immunity from previous infections.

The study, which has not yet been peer reviewed, also found evidence that that BA.2 is resistant to sotrovimab, the monoclonal antibody used to treat omicron infections in people at high risk of severe covid-19 illness.

According to the WHO report, the prevalence of BA.2 is increasing in countries where overall infections are falling as well as those where omicron has not yet peaked.

It is the dominant strain in China, Denmark and South Africa, among several other countries.

In the United States, where cases overall are falling, BA.2 accounted for an estimated 3.9% of all coronavirus cases last week, up from 1.6% the previous week, according to the U.S. Centers for Disease Control and Prevention.

Arkansas Health Secretary Jose Romero said this week that he didn't see the presence of BA.2 in the state as cause for alarm.

"Right now, what we're seeing is not going to change the downward trend of our cases," Romero said Wednesday.

UAMS Medical Center had 39 covid-19 patients on Friday, down from 53 on Monday and a record 99 on Jan. 25, spokeswoman Leslie Taylor said.

"We're pleased that cases seem to be going down," she said. "We hope they continue to go down."

She said the patients on Friday included nine who were in intensive care, seven on ventilators and one on a heart-lung bypass machine.

Sixteen of the 39 patients had been fully vaccinated, she said. In addition, she said two patients had died of covid-19 within the past 24 hours.

At its hospitals in Little Rock and Springdale, Arkansas Children's had 16 covid-19 patients on Friday, the same number as a day earlier, spokeswoman Hilary DeMillo said.

She said the number who were on ventilators had risen from one to two.

More than half the 16 patients were at least 5, making them eligible for vaccination, but only four had been fully immunized, she said.

The Health Department's tally of vaccine doses that had been administered rose Friday by 2,925, which was smaller by 195 than the daily increase a week earlier.

Booster shots made up 26% of the most recent increase.

The count of first doses rose by 1,283, which was up by 332 compared with the increase in first doses a week earlier.

After rising a day earlier, the average number of total doses administered each day over a rolling seven-day period fell Friday to 2,832, which was still up from an average of about 2,400 a day a week earlier but down from more than 12,000 a day in early December.

The average for first doses rose to 888.

According to the CDC, the percentage of Arkansans who had received at least one dose remained Friday at 65.5%, and the percentage who had been fully vaccinated remained at 53.2%.

The percentage of those fully vaccinated who had received booster doses remained at 37.2%.

Among the states and District of Columbia, Arkansas continued to rank 37th in the percentage of its residents who had received at least one dose.

In the percentage who were fully vaccinated, it fell from being roughly tied with Tennessee for 45th to 46th, ahead of only Idaho, Louisiana, Mississippi, Wyoming and Alabama.

Nationally, 76.1% of people had received at least one dose, and 64.6% were fully vaccinated.

Of the fully vaccinated population nationally, 43.1% had received a booster dose.