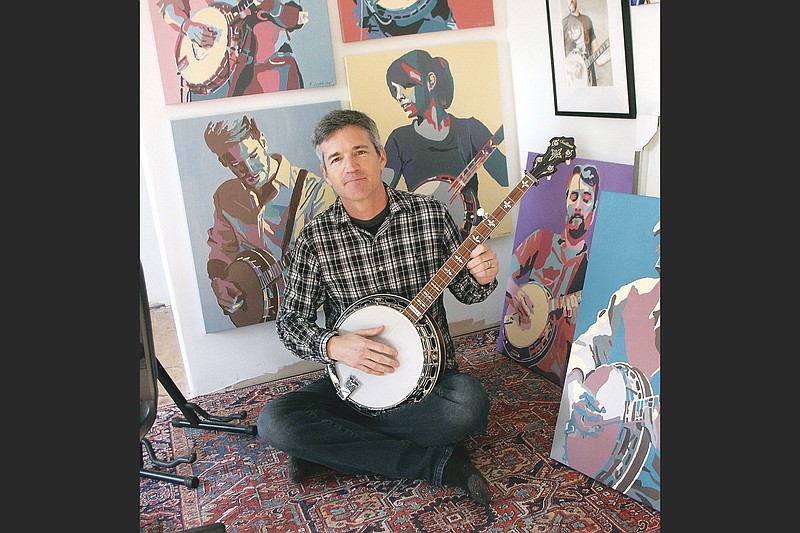 Web developer and graphic artist Colyn Brown who lives in Friendsville, Tenn., is creating trading cards of some of the best banjo players past and present. He grew up listening to bluegrass music and started taking banjo lessons a few years ago. (AP/The Daily Times/Tom Sherlin)

MARYVILLE, Tenn. — If you think it would be hard to come up with the names of 42 awesome banjo players, you might be right.

But if you're Colyn Brown and you've listened to bluegrass music since your dad played festivals at Knott's Berry Farm in the '70s and '80s, your list is much more lengthy.

And with his latest project, he's sharing his own list of favorites old and new.

This resident of Friendsville, Tenn., web developer and graphic artist just started a new business based on his love of bluegrass music and the musicians who make him fall in love with that distinctive sound every day.

The business is called Bluegrass Trading Co. Brown is putting the likenesses of 42 banjo players on trading cards, much like the ones that feature favorite baseball or basketball players. They are the all stars, some relatively new on the scene while others have passed on. The backs of the cards provide interesting facts and bios.

The project has sprouted wings quickly; he came up with the idea in May while still living in Phoenix. By September work was underway. He moved to Friendsville in October, and in January is taking orders for the packs of cards that will each feature seven regular cards and one commemorative. Brown said narrowing down his list to just 42 banjo players wasn't easy.

"There are thousands of banjo players," he said. "It was really difficult to narrow it down to a minuscule 42."

Bluegrass Today caught wind of the project and did an article on Brown in January's issue.

He never collected trading cards as a kid, never pinned them to his bicycle spokes to get that thundering sound as he pedaled through the neighborhood.

He didn't trade players with his friends or enjoy that pink piece of bubblegum included in every pack of cards. There will be no gum in these banjo player cards.

But Brown sees the attraction of being able to hold in your hand works of art that are part nostalgia and reverence.

He admits the whole thing was just going to be a personal project at first, a way to pay homage to his music idols.

"The whole thing has been really organic," he said. "I was thinking of making the cards by hand. Maybe 20 packs and that would be it. It started snowballing into a more ambitious project."

It went from something he could do from his home office to reaching out globally to find the right artists. Brown now has 10 of them — some as close as Knoxville, Tenn., and others from Ireland; Poland; South Wales; Dallas and Portland, Ore. Brown has reached out first to the banjo players or the families of deceased players, to get them onboard with the playing cards. Once they agree, he reaches out to an artist to get them to create a portrait that is then turned into a trading card by a commercial printer.

He first contacted Ireland artist Georgina Flood; next it was Kara Lockmiller, who lives in Knoxville and who then recommended Robert Felker. Before he knew it, Brown had secured 10 artists for the card art.

Up to this point, Brown has taken orders for 400 card packs and will do so through the month of February.

All who have been contacted have readily agreed to be part of this creative process. In addition to the trading cards, Brown has also done some 5-by-7s of the banjo pickers that he is also offering for sale. He's on Instagram and Facebook and has a website.

With all of this attention focused on the banjo, one might wonder how Brown is with one in his hands. He said he's still at the beginner/intermediate phase of his musical journey with the instrument. He has been taking lessons now for a few years.

"The banjo is easy to learn and difficult to master," he explained. "There are a few techniques on the banjo that you can get going on quickly. It's the tone and quality and how you put it all together that's a lot of work." 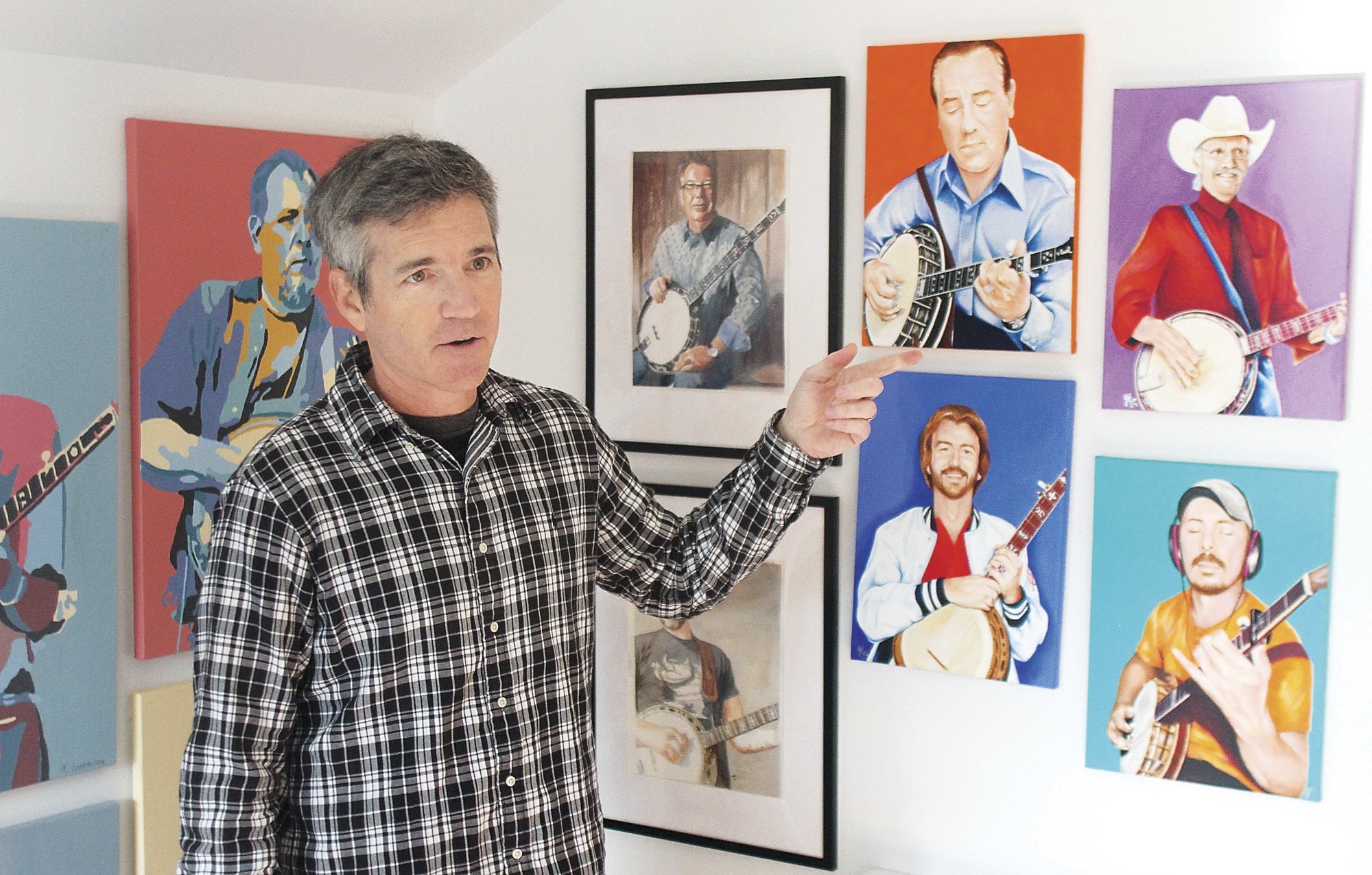 As for who's Brown's favorite banjo player — today that would be Butch Robins, who played with Bill Monroe. He discovers new talent to love as well.

While some of the above listed 15 banjo players are not part of Brown's card set, there is one player the set had to include — that's Ken Brown, Colyn's dad, who made a name for himself in the bluegrass world. His playing, after all, led to this day.

"I listened to bluegrass as a young person," Colyn said. "It was everything. We went to festivals every weekend in the summer at Knott's Berry Farm in California back in the '80s. That was pretty cool."

And while Brown's enthusiasm for the endeavor is evident, he did wonder if there was anybody else out there who might be interested in becoming collectors and increasing their knowledge of banjo pickers near and far. He used his Facebook groups of banjo lovers as a sounding board on whether to move forward.

They gave him their pledges of support; many have already placed orders.

"They told me this has never been done before and it's an amazing idea," Brown said. "It seems to fit my personality — music and art coming together."

He will end up with 42 portraits from 10 artists once this series is done, and many playing cards. Brown said he is going to give the original portraits to the banjo players or their families. He also wants to have a show and display them before handing them over.

Then there's the question of what next? Brown said he probably won't do more banjo player cards, but maybe the mandolin. He's not sure yet.

As he gets ready for sending out the cards, Brown makes time to practice on his banjo. He has an 11-year-old granddaughter who has taken up the fiddle.

"She is taking lessons," he said. "I will be playing with her soon."