Community School of the Arts in Fort Smith reaches $7.5 million fundraising goal thanks to $750,000 grant 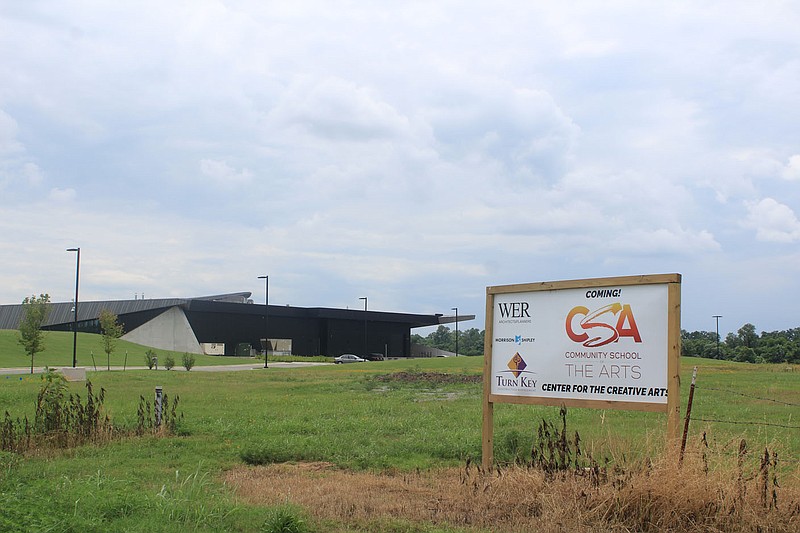 The construction sign for Community School of the Arts is seen next to the U.S. Marshals Museum Friday, July 2, 2021, on the Fort Smith riverfront.

FORT SMITH -- The Community School of the Arts announced Wednesday that it reached its $7.5 million initial capital fundraising goal to build a facility on the riverfront.

This was the result of a $750,000 "challenge" grant that the Texas-based Mabee Foundation awarded for the project, according to a news release from the school. The school will receive the money in the spring after the building's foundation is finished for the Center for the Creative Arts, which will be north of the U.S. Marshals Museum at 789 Riverfront Drive.

"The Mabee Foundation is proud to support the Community School of the Arts and its mission to integrate arts education with leadership training for kids who often have no access to either," Michael Goeke, executive director of the Mabee Foundation, said in the release. "We expect this new facility to expand CSA's influence throughout Arkansas and Oklahoma for many years to come."

Rosilee Russell, founder and executive director of the Community School of the Arts, said the school was awarded the grant after raising $3.7 million over the course of 2021. The school raised 40% of its $7.5 million goal before that point.

"We are so grateful and blessed to have received the Mabee grant and thankful to friends and supporters in this community for helping us reach this goal," Russell said in the release.

Russell said the Community School of the Arts will be housed in the 40,000-square-foot Center for the Creative Arts after it's finished. The school is on the campus of St. Boniface Catholic Church in Fort Smith. It has an enrollment of 700-800 students per semester between its on-site and off-site programs.

Construction is scheduled to begin this month and be completed in the summer of 2023, according to the news release.

The facility will hold arts programs for young children through high school students, as well as adults, the release states.

"The institute will operate daily as students attend for half of their school day from potentially 39 regional school districts and will receive high school credits at their participating school," the release states.

Phillip Russell, director of development for the school’s Inspiring Excellence campaign, said in the release the campaign will move toward raising the money needed to complete the new facility.